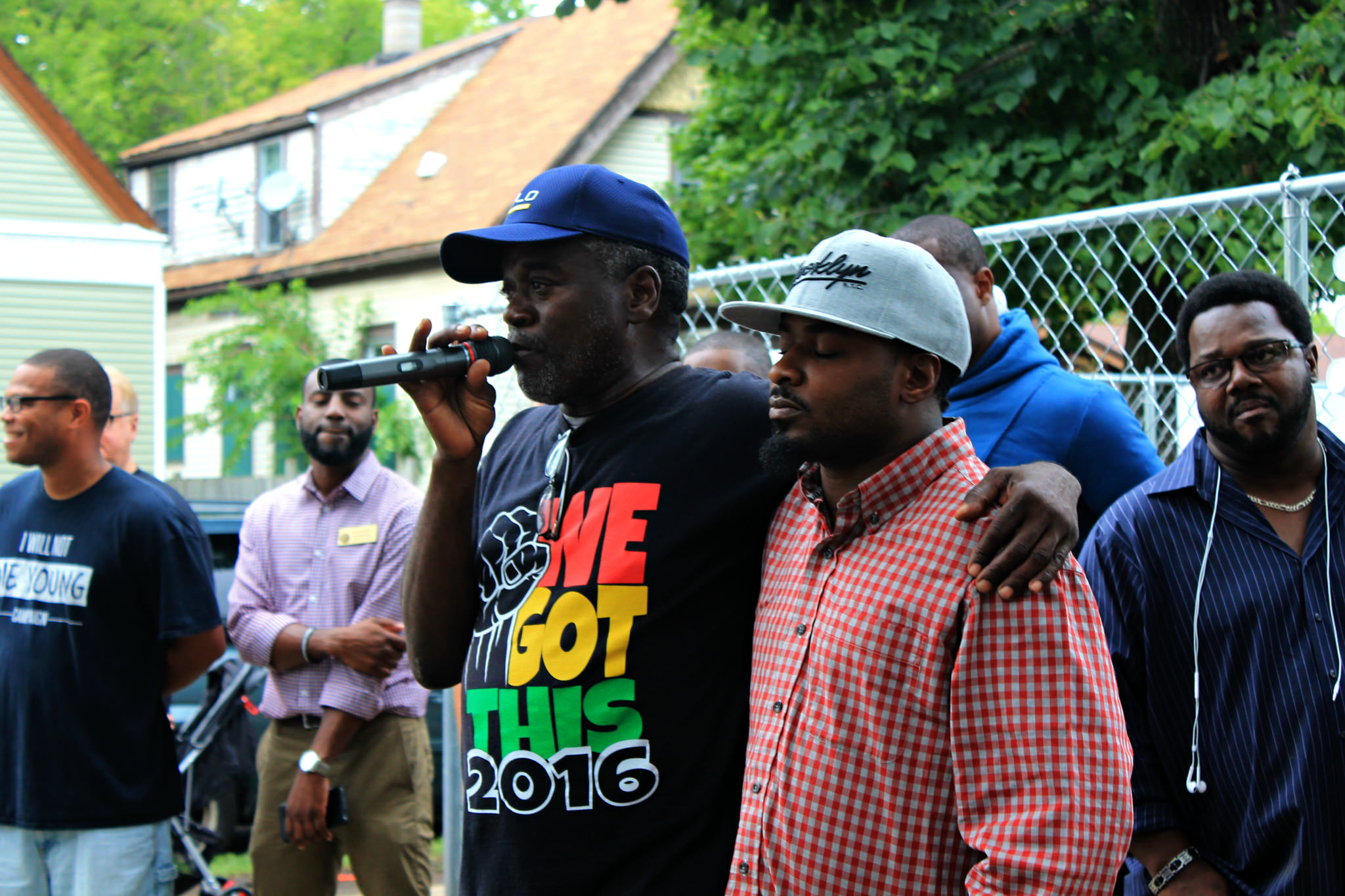 Andre Lee Ellis recites the poem “I, Too” by Langston Hughes. (Photo by Allison Steines)

Andre Lee Ellis, an activist, community leader, and theatre director, and Rose Daitsman, a lifelong advocate for many human rights issues, have been named the 2016 recipients of the Frank P. Zeidler Public Service Award.

Mr. Ellis and Ms. Daitsman will each be presented with the Zeidler award during a special ceremony at 8:30 a.m. on Tuesday, September 20 in the third floor Council Chamber Anteroom (prior to the start of the regular meeting of the Common Council) at City Hall, 200 E. Wells St.

“The Committee’s decision recognizes these two outstanding leaders from different segments of our community, who share the common vision of empowering young people to overcome special obstacles in our society. Their positive examples and inspiring messages are things that our city needs to honor and grow,” said Arthur Heitzer, chair of the Frank P. Zeidler Public Service Award Selection Committee.

Mr. Ellis has worked diligently to improve the lives of young African American males, while also investing in and improving the community, Mr. Heitzer said.

Mr. Heitzer continued: “Mr. Ellis’s creative and hands-on work to improve the lives of young African American men and boys on the north side has won well-deserved local and national recognition, including his appearance earlier this year on the Steve Harvey show and being named a ‘Harvey’s Hero.’ Every Saturday morning, young people, and their mentors, can be seen at 9th & Ring Streets, beautifying the area with a community garden.”

Mr. Heitzer added: “Their involvement has also decreased violence, and inspired many young men to work positively for their neighborhood while breaking negative cycles and committing themselves to high and realistic goals. His leadership in the ‘We Got This’ movement shows what caring and listening people can do in some of the most challenged situations in our city.”
About Ms. Daitsman, Mr. Heitzer said: “Rose Daitsman has truly been an indefatigable, lifelong advocate for many human rights issues, including gender, racial and economic equality. An activist for peace for many decades, she lives and breathes the understanding that we can only have a secure peace if it is based on justice.”

Alderman Robert J. Bauman, vice-chair of the award selection committee, said Mr. Ellis and Ms. Daitsman are role models who have worked to make Milwaukee a better city. “Andre Lee Ellis exemplifies what an engaged activist and mentor looks like – putting forth his own energy and vision for improving the lives of others in our city and doing it for the pure joy of watching others prosper, of seeing the betterment of total strangers,” he said.

“Over the years Ms. Daitsman has selflessly pursued causes that are of great import to our city, looking to bring human rights and social justice issues such as human trafficking and equal rights to the fore, and keeping her energy and focus strong for an extended period of years. Her work is worthy of recognition for any number of reasons,” Alderman Bauman said.

June M. Perry, a member of the Frank P. Zeidler Public Service Award Selection Committee, said Mr. Ellis “is someone who takes action when he sees a need in the community.”

“He saw young African American boys who didn’t know what it meant to get dressed to go out to dinner…and he did something about it….the 500 Black Tuxedos project that brought together men and boys who were all dressed in tuxedos to go out to dinner,” Ms. Perry said.

“He saw boys who wanted to work but had no jobs so he created ‘We Got This’ to pay them $20 for showing up on time on Saturday mornings to plant and grow vegetables in a community garden. He is a role model, mentor, activist and father figure to many who look to him for guidance and advice. Andre is saving lives and helping boys become responsible men. I wish we could clone him!” Ms. Perry said.

Mr. Ellis moved to the Borchert Field neighborhood in 2011 and instantly began questioning the negative behavior he witnessed there. He took his interest a step further when he asked the young African American men he engaged with how he could help and what assistance they needed. His four decades of experience in theatre has helped him build relationships with the young members of his community and initiate programs that directly impact them and the community in which they live.

In the summer of 2014 Mr. Ellis started the nationally-recognized and aforementioned “We Got This,” campaign. It began when one 12-year-old boy asked Ellis for advice on how to stay out of trouble. He responded by putting him to work and paying him $20 in exchange for the boy’s improved behavior. Mr. Ellis’s idea grew, and now “We Got This” sponsors nearly 100 boys every Saturday to clean up their neighborhood. Ellis uses social media to find black men to help pay each boy $20.

That same summer Mr. Ellis founded another program to empower young African American men in Milwaukee. His “500 Black Tuxedos” event invites black men to sponsor boys in renting a black tuxedo for a day on the town. In the first year, 50 boys and 50 men participated, and under his leadership, the program continues to grow both locally and nationally.

Mr. Ellis has dedicated his life to “putting ‘neighbor’ back into our ‘hoods’” and has served as a positive influence to many. He also helped establish Milwaukee’s Juneteenth pageant as well as Garfield Avenue Blues, Jazz, Gospel and Arts Festival. He previously worked with Jomandi Productions, an African American theatre company in Atlanta, Georgia, before moving back to Milwaukee, where he was born and raised.

Rose Daitsman has been a resilient, lifelong advocate for many human rights issues, including gender, racial and economic equality. When Ms. Daitsman notices inequalities, she aims to correct them through working with existing organizations, or creating coalitions to unite around that particular issue.

With a background in Chemical Engineering, Ms. Daitsman has been a longtime proponent of science, technology, engineering and math (STEM) education. She personally developed an engineering program for minority students at the University of Wisconsin-Milwaukee as well as a Peace Studies curriculum for Milwaukee Public Schools. Mr. Heitzer noted that “one of her special and unique contributions was promoting the involvement of Native American Indian students in the fields of science and engineering.”

In 2006, Ms. Daitsman created the Greater Milwaukee Human Rights Coalition, which soon after produced a report in 2007, titled: “The Status of Racial Discrimination in Criminal Justice, Employment and Housing in Milwaukee, Wisconsin.” She assembled 10 endorsing organizations and 20 individuals to help research and publish this 30-page report, which was later submitted to the U.S. Human Rights Network and the U.N.’s International Convention on the Elimination of All Forms of Racial Discrimination (CERD) Committee. This report then led to her involvement in the revitalization of the city’s Equal Rights Commission, which was reinstated in 2009.