You are here: Home / Community Voices / Call for transparency in Wauwatosa police shooting
Share this... 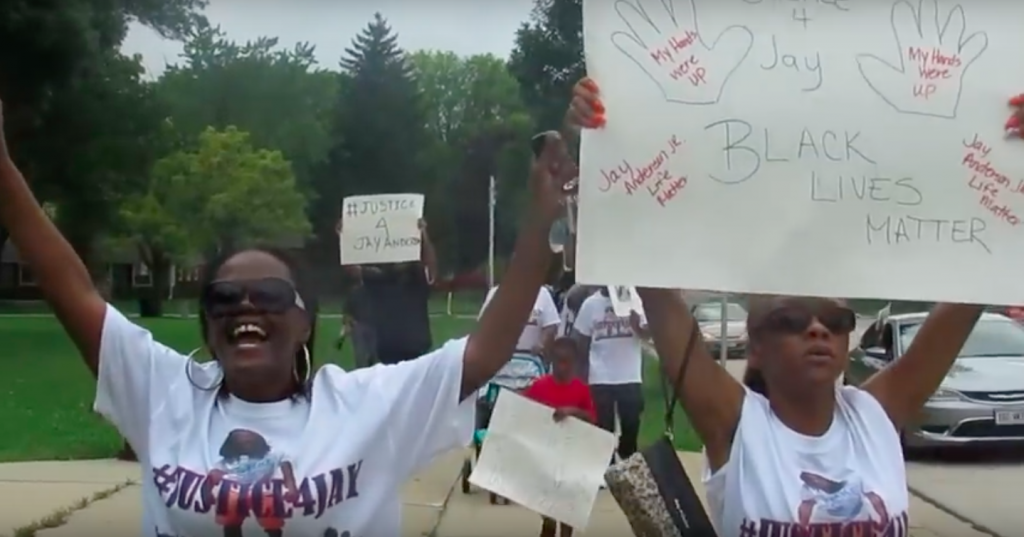 Isiah Holmes, a writer and videographer, is calling for transparency in the Wauwatosa police shooting of Jay Anderson, as well as a federal review of the Wauwatosa Police Department. You can read more from Holmes about the case in The Fifth Column News, Cop Block and the Pontiac Tribune.

Today’s push for police accountability has emboldened civilians to unapologetically speak out. The proposals range from filming the police, to Chicago’s civilian-operated accountability boards. Milwaukee struggles with many similar issues. A recent shooting in Wauwatosa by its police department has highlighted another grievance — lack of transparency.

In three months, little has been released regarding the killing of 25-year-old Jay Anderson. A Wauwatosa officer shot Anderson at 3 a.m. after deeming his parked car suspicious. Since then, his family has called for answers through peaceful protest. Wauwatosa Police Department Chief Barry Weber, the family reports, hasn’t met them in person.

As a writer and concerned citizen, I’ve written numerous articles on the killing. I also attended a protest, where I met the Anderson family. At the protest, Mrs. Anderson said on camera, “I want his name out there, no one is putting his name out.” Protesters distributed fliers warning residents about Joseph Mensah, the officer the Anderson family claims was the shooter. The police department has not officially confirmed his involvement.

Police resistance to protests has escalated although no arrests have been made to date. The family says the police department commanded them not to march in the Mayfair mall. During a recent protest, to which WPD brought dogs for unclear reasons, Mrs. Anderson was told either she or Jay’s fiancée would be arrested if they protested out loud. The family has also experienced harassment and surveillance by local police.

Other Cop Block contributors have filed Freedom Of Information Act (FOIA) requests with WPD. The department, by its own admission, has denied numerous requests regarding Jay’s death. Cop Block’s FOIAs did lead to the release of Tosa’s annual reports several months ago. The department ceased publication of the annual reports in 2011, and removed the reports from its website in 2015 without notice.

Take a moment to compare this with the shooting of Sylville K. Smith in Sherman Park that ultimately sparked Milwaukee’s riots. It took days for information to come out regarding the officer. Now, we know both his name and bits about his personal life. In Tosa, a frustrating wall stands between the citizens and the department.

As more time passes, it seems more residents have become suspicious of WPD’s handling of the Anderson killing. They wonder what happened that night, and especially why no information has been released. WPD hasn’t even held a press conference, unlike a shooting last year allegedly involving the same officer. Does the department not owe the family and the rest of Tosa transparency? More profoundly, will residents trust WPD to the same level as before? Will the department care one way or the other?

Only 20 seconds of footage is known to have been captured that night. It reputedly shows Anderson with his hands up, before getting shot in the head multiple times. Although it was likely captured via a police body camera, this remains to be confirmed. Interestingly, Chief Weber denounced body cams in 2014.

Weber struggled to repair WPD’s reputation of racial bigotry after taking power in the 90s. That reputation hasn’t gone away, despite his sanitization efforts spanning that decade. Weber went as far as to directly comment on a Tosa high school student’s comic depicting an officer pulling over a black driver. Although Weber called the comic unfair, the student, Dan Moore, said it’s what happens in Tosa. Thus, WPD treads the double-edged dagger of restricting transparency, and quelling dissent. It happened with Moore, and now the Andersons.

Even once the investigation ends, what’s keeping something like this from happening again? Perhaps it starts with Tosa residents paying attention to WPD’s actions, and speaking up when they don’t agree.

Many departments nationwide are currently under Department Of Justice review, including the Milwaukee Police Department. Tosa’s department, however, isn’t on that list. The Wauwatosa Police Department needs to undergo an immediate, top-down review of its practices and behavior. The Andersons agree with this.

“They’re at the point now where they’re sick of us,” says Mr. Anderson “We’ve messed with them enough. They want to arrest us, and sic dogs on us now.” Mr. Anderson also spoke of Tosa’s ongoing reputation for racial discrimination.

Full transparency is needed. The people in Wauwatosa, especially those —regardless of race — who’ve experienced misconduct by WPD, deserve a say. Whether it’s suggesting reforms or describing personal experiences before an audience, they must speak. We’ve tried allowing WPD to reform itself and things haven’t changed. Thus, we must now move towards including civilians in how we review and reform our police. Let’s start with the Wauwatosa Police Department, and let’s start now.