You are here: Home / Community Voices / Changing the Game
Share this... 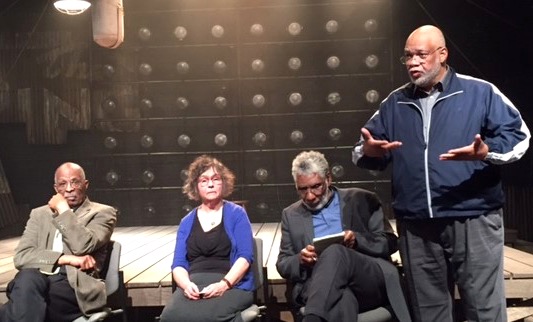 Margaret Rozga, poet, civil rights activist and professor emerita of English at UW-Waukesha, recommends “The Royale” at the Milwaukee Rep, for its depiction of game-changing actions that can help inspire others to confront inequities.

In Jim Crow America, white men would gather five or six young African-Americans, blindfold them, and set them in a boxing ring to fight. This was the battle royale. The last of the boys remaining on his feet would be declared the winner. His prize? He had one minute to pick up the coins scattered on the boxing ring floor.

Playwright Marco Ramirez picks up this fact of history as a key backstory and metaphor in his play The Royale, now at the Milwaukee Repertory’s Stiemke Theater. In the play Wynton, manager of the first African-American to win the world heavyweight boxing championship, tells his fighter, Jay Jackson, about the royale. How the action unfolds in this production of “The Royale” is breathtaking.

I was one of three members of the 1967 Milwaukee NAACP Youth Council invited to reflect on Milwaukee’s open housing marches in the light of this play in a talkback moderated by Everett Marshburn after the Oct. 15 matinee performance. Also on the panel of respondents were Fred Reed, who currently devotes most of his time to initiatives advancing youth in the area of information technology, and Prentice McKinney, who is helping to organize events commemorating the 50th anniversary of the open housing marches. Each of us found the play to be a powerful example of all it takes to be a game changer.

In the play Wynton knows from his own experience of being one of the blindfolded boys that the royale is rigged against African-Americans. The white men in control of the game must have been amused by the sight of the confused boys swinging at each other blindly and being punched from all directions, finding it impossible to ward off the blows.

When Wynton managed to be the last one standing, he was at first thrilled to pick up in the ring more money than he could earn in a week on any of the jobs open to him. The other contenders got nothing, though they may have sustained injuries in the royale. Wynton realized this when, back at home, he emptied his pockets of the coins he picked up and found among them teeth knocked out of the other boys.

White men make the rules. The rules of this game humiliate African-Americans, make them objects of ridicule, set them to fighting and hurting each other, all for the chance that one of them will rise above a paltry weekly wage.

In the years after World War II, African-Americans came to Milwaukee and found work in such places as meatpacking plants and tanneries. It was hard, dirty work, but it paid more than work on southern plantations that had reinstituted slavery in all but name. Still the “game” here, too, was rigged against them. The housing available to African-Americans was limited to a small area of Milwaukee, though the African-American population nearly tripled in size from 21,172 in 1950 to 62,458 in 1960. By 1967 African-Americans were 12 percent of Milwaukee’s population living on 5 percent of the city’s land, with a population density four times greater than elsewhere in the city.

The housing stock in that limited area became overcrowded, and landlords had few incentives to keep their property up to code. The demand for housing was so great those properties could be rented even in poor condition. The courts, presided over by judges who belonged to the segregated Eagles Club, let landlords off with token fines, as little as $1 for hundreds of building code violations. When Vietnam veteran Ronald Britton came to the Milwaukee NAACP Youth Council for help after he was refused a rental on 29th and Burleigh, the Youth Council changed its focus from pushing for stronger building code enforcement to advocating for the open housing legislation introduced by Ald. Vel Phillips.

The game had to change. The city needed to change. It needed to see beyond the fears pumped up by politicians playing for white votes and a real estate industry that profited from the high demand and limited supply of a segregated housing market. It needed to change from a system based on fear and exploitation to something more positive and welcoming. The open housing marches, especially those across what is now the James E. Groppi Unity Bridge, were miles-long steps in this direction.

The struggle, of course, continues. Civil rights history, including Milwaukee’s civil rights history, can and does inspire those working for racial justice today. “The Royale” and the talkback at the Milwaukee Repertory Theater were also steps toward envisioning a city in which bridges are links rather than boundary lines. I applaud the Rep for bringing the resources of their stellar art to this crucial city issue. I urge everyone to see this powerful play, which runs until Nov. 6, and to enter into the conversation about how we might best change inequities in today’s game.