You are here: Home / News / Arts and Recreation / ‘I Am a Boy of Color’ presents affirming images of black and brown boys
Share this... 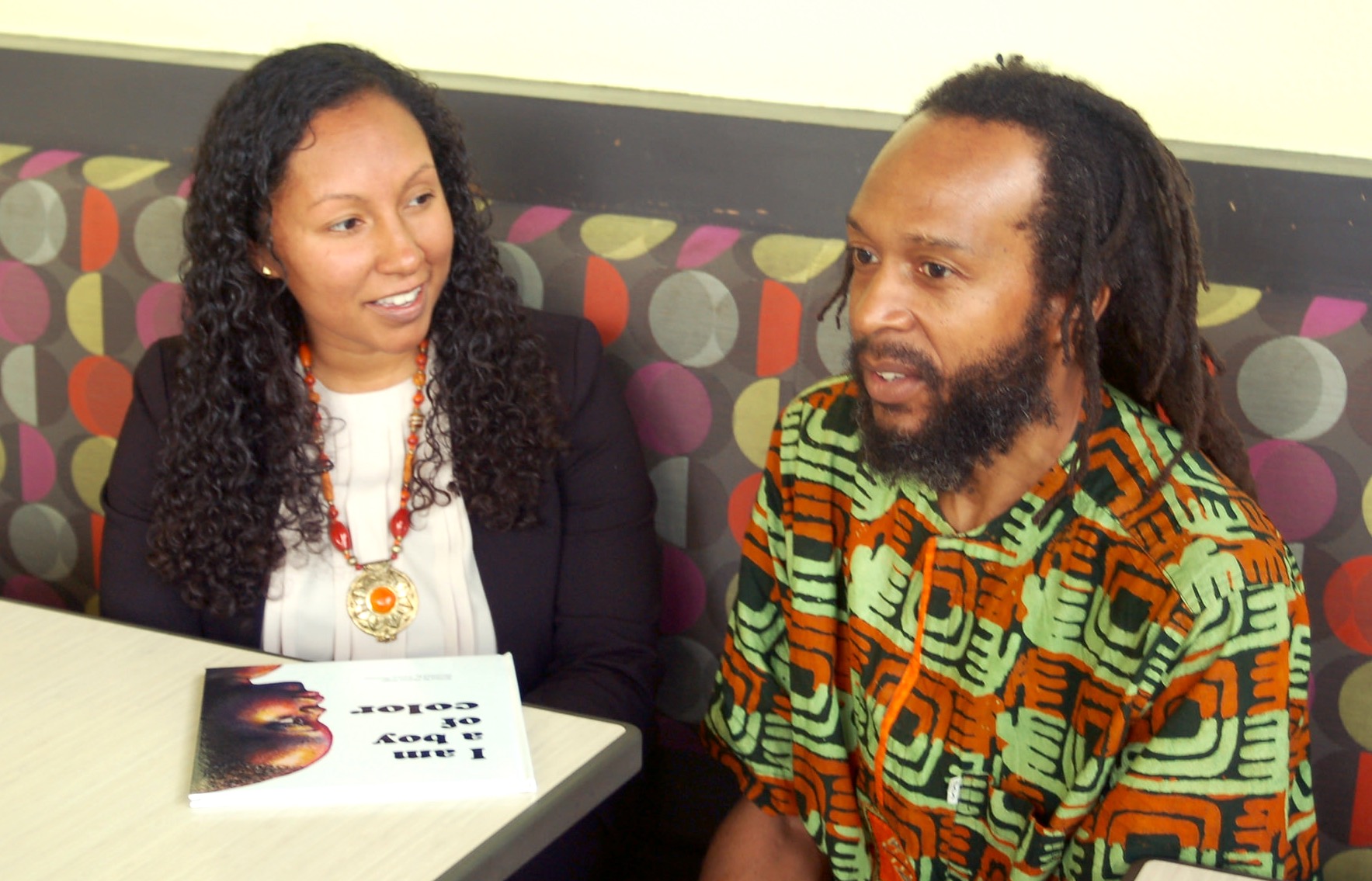 Author Deanna Singh and illustrator Ammar Nsoroma talk about producing their first book, “I Am a Boy of Color.” (Photo by Andrea Waxman)

Like many parents, Deanna Singh loves to read to her sons Zephaniah, 8, and Zion, 4, before they go to sleep each night. Reading has always been a high-priority activity in the Singh-Ponder household. It’s so important that Singh woke up in a panic one night thinking about her family’s books.

“Oh my gosh, what does my bookshelf look like?” Singh thought. “Are my sons able to find themselves in our bookshelf?”

Concerned about the negative images of brown and black boys that abound in the media, and thinking about how to show her multiracial sons that their parents and communities see them as beautiful, good and full of potential, Singh recently wrote her first book.  Singh’s mother is African-American and her father is Sikh. Her husband, Justin Ponder, is African-American and German-American.

In “I Am a Boy of Color,” which is aimed at children ages 3 to 7, Singh speaks to her sons, and to all boys of color, of their value. The book is illustrated by award-winning local artist Ammar Nsoroma, who is known for his drawing, painting, murals and mixed media, and is also an avid reader. 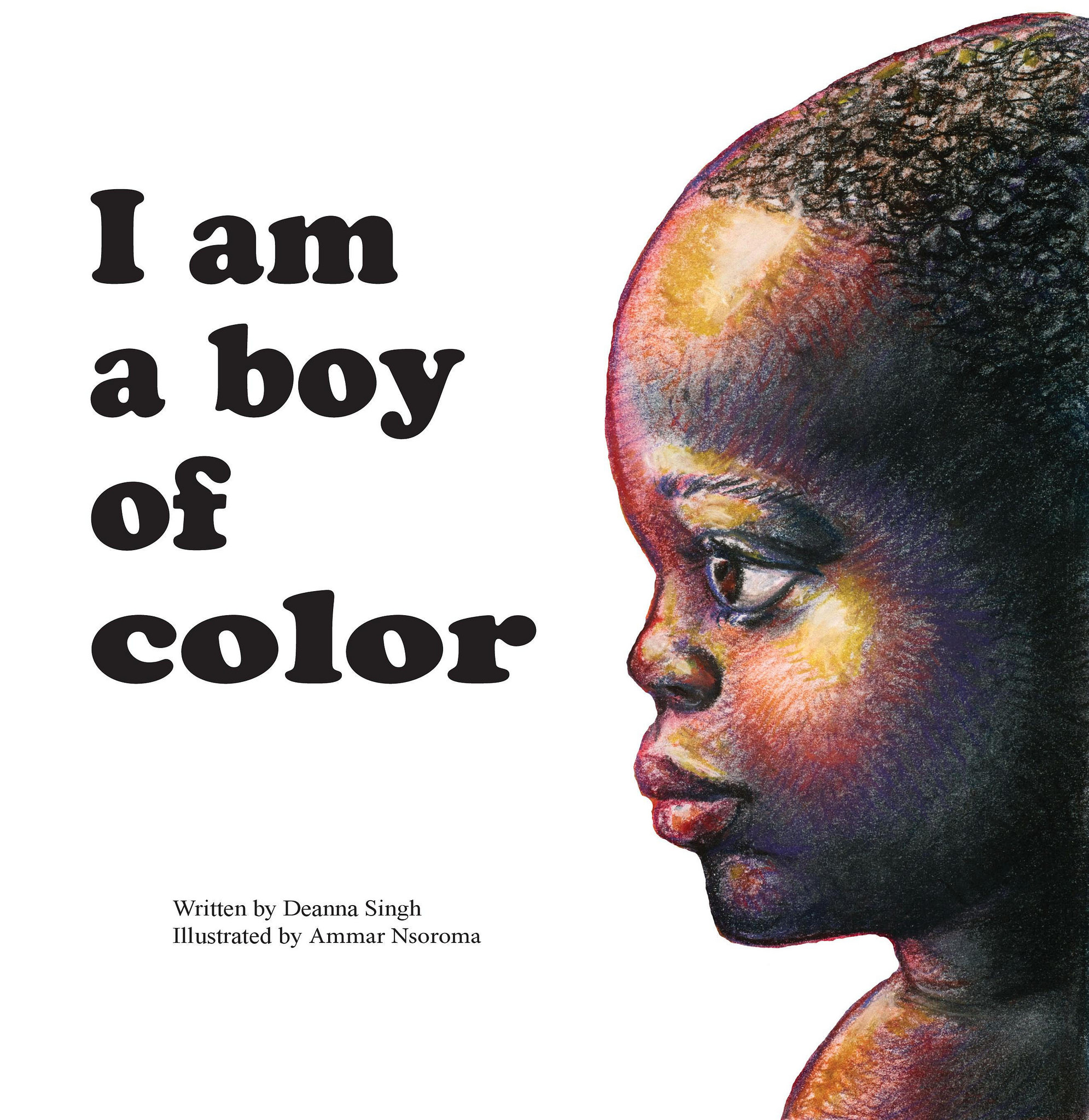 “I Am a Boy of Color” can be purchased online and will soon be available in area bookstores. (Image courtesy of Orange Hat Publishing)

Wondering too if there was a larger conversation taking place about the issue, she discovered the University of Wisconsin Madison’s Cooperative Children’s Book Center (CCBC) website.

“It blows your mind, in this day and age. It’s incredibly frustrating,” Singh said.

Singh envisioned illustrations that highlighted the beautiful features of the boys in her life and despaired of finding the right artist; then she came across one of Nsoroma’s pictures on Facebook.

“Someone posted a drawing of a child (by Nsoroma) and it was completely spot on to what I imagined,” Singh said.

Nsoroma, who works with young artists at Express Yourself Milwaukee, Artists Working in Education (A.W.E.), Arts @ Large and elsewhere, was hesitant as first because he had so many other artistic commitments. But Singh continued to ask him and in the end he agreed. He realized that if he turned it down, he would not be happy with the result, he said.

Although the book only has been out for a few weeks, it has received an overwhelmingly positive response, Singh said.

“I have had six parents I don’t know who have had tears welling up in their eyes when they look at the book,” she said. The most moving response came from a mother of grown children who said that she wishes she had this book when her kids were younger. “Everyday I had to put a shield on him and on myself as I sent my son out. I didn’t feel like I had the words to pour on him to shield him,” she added.

Singh recently stepped down as CEO of the Burke Foundation and will soon head up the Dohmen Company Foundation. She explained that she and her husband have created their own Flying Elephant Foundation, making their sons co-chairs, in part to show them how they can support other children of color. Initially, proceeds from “I Am a Boy of Color” will support two boys at We Got This Milwaukee’s 500 Black Tuxedos 2016 on Dec. 17.

Singh believes it’s important to tell children that they can use their abilities and talents to do good in the world.

“This project is not just about this book,” she said. “It’s about starting a conversation and about how we can create other opportunities.”