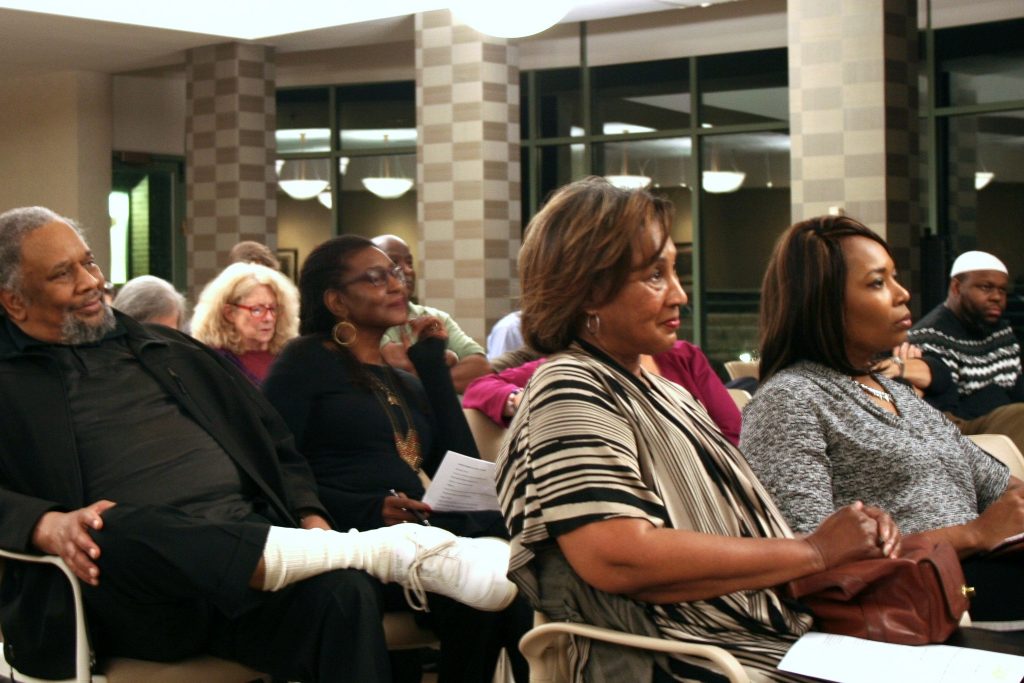 About 60 residents and city leaders attended a panel discussion sponsored by the Community Coalition for Quality Policing at the Jewish Home and Care Center, 1410 N. Prospect Ave. (Photo by Jabril Faraj)

In the early morning hours of April 7, 2001, Timothy Thomas, a 19-year-old African-American man, was shot and killed by a Cincinnati police officer. The shooting, the 15th police killing of a black man in the city since 1995, set off five days of riots.

Shortly before Thomas’ killing, the Cincinnati Black United Front and ACLU, with the assistance of civil rights attorney Al Gerhardstein, had filed a class action lawsuit in federal court against the City of Cincinnati alleging 30 years of racial discrimination by police against African-Americans.

“The community had been simmering,” said Iris Roley, project manager at the Cincinnati Black United Front, a coalition of activists and clergy that was formed in early 2001 to combat racial discrimination. “We were trying to save our people; we were trying to stop the bleeding. We didn’t want any more police-involved shootings. And, whatever it took to make that happen, that’s what we were going to do.”

The suit, backed by hundreds of personal accounts, resulted in a court-mandated collaborative agreement in early 2002 that the independent monitor’s final report called “one of the most successful police reform efforts ever undertaken.”

Recently, Roley, Gerhardstein and former Cincinnati Fraternal Order of Police (FOP) President Kathy Harrell discussed the collaborative, its formation and results at an event hosted by the Community Coalition for Quality Policing (CC4QP), a Milwaukee group that includes more than 20 faith-based, community and civil rights organizations. The purpose of the event was to educate the public on the Community Problem-Oriented Policing model, a strategy meant to more proactively and effectively reduce crime. 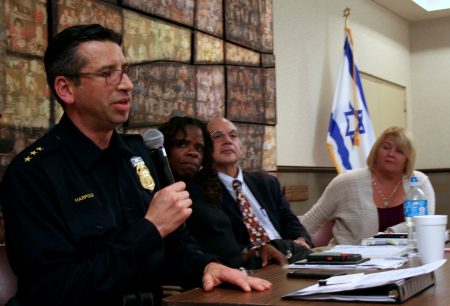 Cincinnati adopted the model as part of the collaborative agreement, also instituting bias-free police training, use-of-force reform and accountability measures, including an early-warning system to detect troubled officers and the creation of an independent Citizen Complaint Authority. Heightened transparency practices for officer-involved shootings were also adopted. Since then, use-of-force incidents, citizen complaints, violent crimes and misdemeanor arrests in Cincinnati have dropped dramatically.

“It was about changing the mindset and changing their vision of what it meant to be a police officer,” said Gerhardstein.

The purpose, according to Gerhardstein, was to address the root causes of crime instead of making arrests. “It’s counterproductive to do those types of arrests that only happen in the black community, that only piss off the black community, and that don’t lower crime — they just make criminals out of ordinary citizens, and make suspects out of people who are just going to work,” he said.

Change did not happen immediately, however. Harrell, who was an officer at the time of the riots, said police felt like they were being unfairly attacked. Initially, she voted against the police union engaging in the reform process. But after becoming FOP president, as part of the reform board, Harrell saw that officers wanted reform, despite the police administration’s resistance, and her view changed.

Roley, Gerhardstein and Harrell all stressed that the progress so far has not been easy. Especially in the beginning, there was resistance from the police chief and conflict within the reform board.

“This is real stuff,” Roley said. “It’s not easy, because we’re humans and we all think we know what’s best. But, we’re telling you that it worked, and it’s still working because we’re still engaged.”

Gerhardstein said communities around the country are calling for these reforms and others, including requiring de-escalation in any encounter that may lead to use of force, a move he called “common sense” and “good policing.”

“I’m excited that the pressure by the public is helping raise the bar for policing across the country,” he said. “Because of the drumbeat, and the footsteps, and the voices of the community, policing is advancing well above the constitutional floor.”

In Milwaukee, high profile killings of black men have put policing tactics squarely in the spotlight. Dontre Hamilton, a 32-year-old man with mental illness was shot 14 times by an officer in 2014, after an altercation in a downtown park. Most recently, Sylville Smith’s shooting in August sparked two days of sometimes-violent demonstrations in Sherman Park.

“Enough is enough,” said Darryl Morin, former director of Wisconsin’s League of United Latin American Citizens (LULAC), a CC4QP member. “If Milwaukee is going to become the city we know it can be, for everyone, we need to change the way we’re doing things.”

Wisconsin leads the nation in the incarceration of black males. In Milwaukee County, more than half of African-American men in their 30s have served time in state prison. One in eight black men in the county, which is home to almost 70 percent of the state’s African-American population, are currently incarcerated.

“These issues are issues that most urban places experience, but what’s different in each of these places is how closely the police and community work together, and what they do when they work together,” said Milwaukee Police Department (MPD) Assistant Police Chief James Harpole.

Harpole said MPD is committed to finding solutions other than arrest for offenders and to working with the coalition, acknowledging that different communities have different experiences with police, some of them negative. He said it’s important for MPD to work with residents, “so that we can become the police department that you want us to be, so that we’re policing in this city the way the community wants us to police.”

Sherman Park resident Barry Givens said for that to happen there has to be “a genuine effort and a willingness to sit down at the table, establish dialogue and keep that going.”

Andra Williams, a police captain in District 4 who attended the discussion while off duty, agreed, saying dialogue between groups is essential to create understanding. “When people are in isolation and they get into their own groups, they start to hear their own messages … over and over again.”

Milwaukee NAACP President Fred Royal said the coalition, which has already met with MPD Chief Ed Flynn and his three assistant chiefs, hopes the Department of Justice collaborative reform process that is currently underway results in more dialogue and concrete commitments from MPD.

Roley said it is important to “remove blame” to find solutions. She noted that the Black United Front’s greatest accomplishment has been to increase the public’s knowledge and engagement around safety, and what they want that to look like.

Givens added, “There are so many things that get pushed to the side because we focus too much on the police. And, if we turn our attention to some of these other, deep-seated problems, then I think we can start to make some headway.”