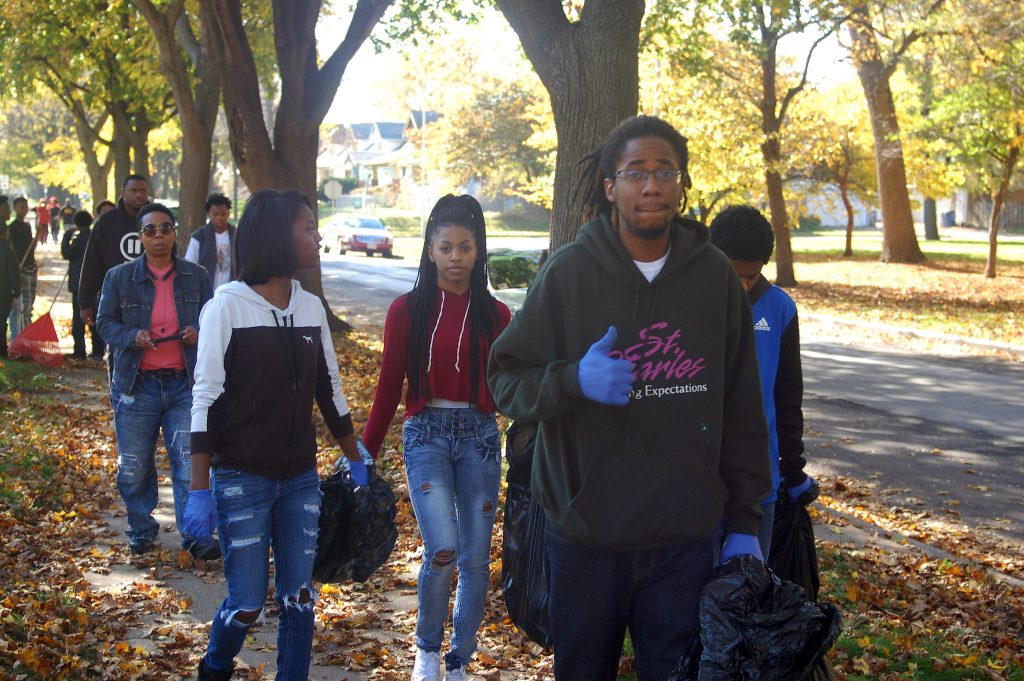 On a recent Saturday morning, about 30 teens assembled at the edge of the playground at the Mary Ryan Boys & Girls Club in Sherman Park. Under a sparkling blue sky and vibrantly colored trees, the hoodie-clad youth picked up gloves, rakes and garbage bags and headed east to 41st Street.

The young men and women from Program the Parks, a grassroots Sherman Park youth initiative started early last summer, together with adult and teen volunteers from Running Rebels, raked leaves from the lawns of the tidy bungalows lined up across from the park and piled them in the street.

Niekale Steward, 16, comes to Program the Parks activities more than once a week to help out. He said his friends come and he has made new friends through the program.

Steward said that Vaun Mayes, founder of Program the Parks, is like a big brother to him. “He’s a strong leader. (He always wants) me to do something with my life, not just be like everybody else; not be out here stealing cars and stuff like the other teens,” Steward said. 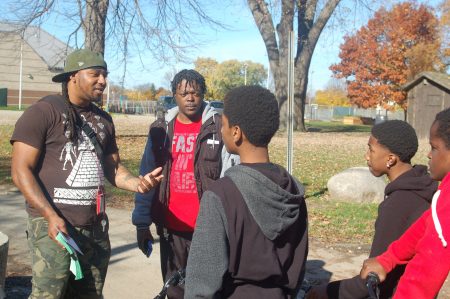 The raking effort marked the launch of Program the Parks’ Youth Stipend Program to train and employ young people ages 12 to 25, according to Mayes. In addition to helping youth learn leadership and employment skills and earn money, the program is intended to provide lawn care and leaf and snow removal services to area residents, especially people who are elderly or disabled.

“This is the first formal time we’ve worked together,” noted Victor Barnett, referring to Program the Parks. Barnett, the founder and executive director of Running Rebels, added, “If there’s good things being done here in Sherman Park, we’ll be here to help.”

The first time out was a training day and homeowners were not charged for the service, but once the program is in full swing homeowners will be asked to pay $20 for a crew of three or four youth, according to Mayes.

“We won’t charge them every time we come out and do a service,” Mayes said. And elderly and disabled homeowners will not be charged at all.

“During the winter, we’ll be on call. We’ll let the youth know that there’s an opportunity out there if they need some money,” Mayes added, noting that the young people often go door to door seeking this kind of work and the stipend program will provide a bridge between them and residents who need services.

Four young men riding bicycles on North 41st Street slowed down when they spotted the teens raking leaves and struck up a conversation with Mayes, who invited them to join the group. They returned their bikes to one of their homes nearby and came back to work.

Mayes started working with young people congregating in Sherman Park when he heard about fights taking place there early last summer. Since then he has attracted a group of volunteers and donors and has developed a schedule of activities for youth that includes free meals, games, social gatherings and skill-building sessions. People who want to donate can do so through the PayPal account @ paypal.me/WeAllWeGot

Program the Parks volunteer leader Gab Taylor, who was working with the teens raking leaves, said she thinks they are exhibiting leadership and discipline.

“I’m glad that so many of them came out. It’s not really about the money because it’s not a lot of money but it’s the fact of community service and showcasing their leadership skills. I’m glad that they’re all out here and they’re doing a wonderful job.”

Mayes said the program aims to do something similar to Andre Lee Ellis’ “We Got This” initiative in the Borchert Field neighborhood. Mayes added, “It’s giving them something positive to do and puts some money in their pocket.”