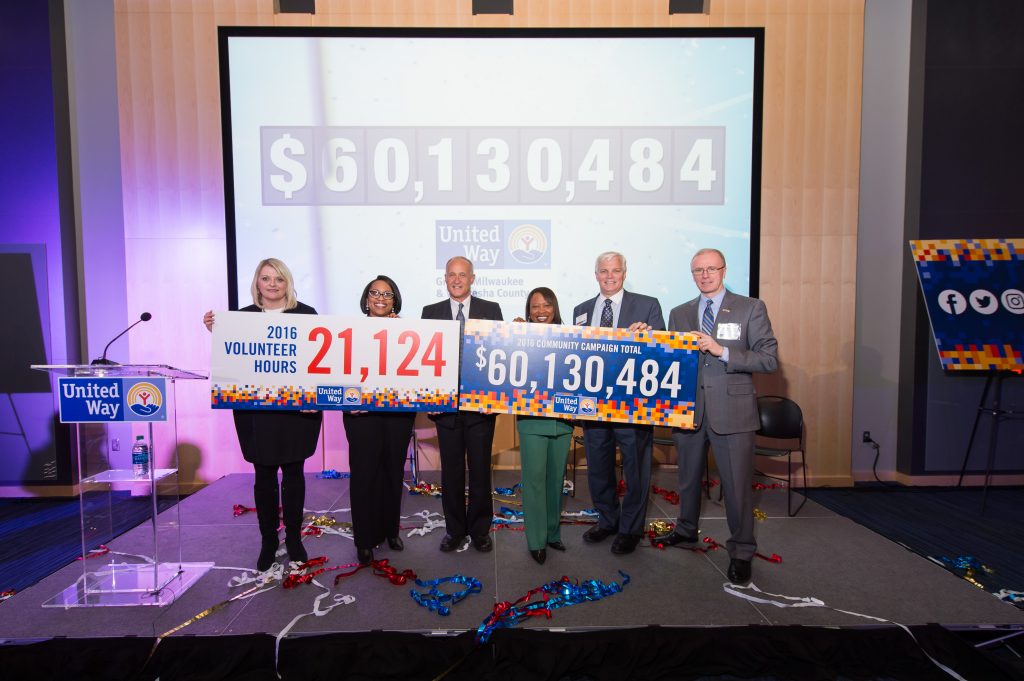 United Way of Greater Milwaukee & Waukesha County announced last night that it raised a record-breaking $60,130,484 during its annual community campaign and surpassed its first ever volunteer goal, recording 21,124 volunteer hours during its annual Season of Caring.

“It’s truly a testament to the generosity of the people in our four-county region that we surpassed our aggressive goal this year,” said Gregory S. Marcus, president of The Marcus Corporation and chairman of the United Way board of directors. “Last year’s record-setting Community Campaign was part of a transformative year as we celebrated the merger between United Way of Greater Milwaukee and United Way in Waukesha County.”

“Many organizations and individuals increased their gifts to meet our new goal, and I’d like to thank everyone who contributed to this year’s campaign. We did this together,” said Marcus.

The annual campaign was chaired this year by four dedicated community representatives who gave their time and talent to ensure the success of the campaign. Jackie Herd-Barber, community volunteer; Larry Blanton, senior vice president & general manager of MetalTek International; Richard Meeusen, chairman, president & CEO of Badger Meter; and Steven SaLoutos, executive vice president of U.S. Bank served as the co-chairs and gave their time and talent to encourage others to be a part of the campaign.

Mary Lou Young, president & CEO of United Way of Greater Milwaukee & Waukesha County recognized the nearly 1,500 organizations and companies that participated in the campaign. She stated, “Reaching this goal is a shining example of our community coming together to create life-changing moments for individuals and families in our community. We are committed to ensuring children get off to a strong start and achieve success in school, helping families build financial stability, and providing people with the ability to live healthier lives. Whether you contributed a major gift or a dollar a week, we thank you.”

United Way also announced the results of its first ever volunteer goal. At the start of the Community Campaign United Way announced its volunteerism goal of 16,750 volunteer

hours completed during the Season of Caring, which ran from August through December. The total number of hours served by community volunteers was 21,124, surpassing the original goal by 4,374 hours.

“The volunteer goal enhances the resources mobilized through donations with sweat equity; helping United Way partner agencies and initiatives fulfill their missions and offer services they may not have the capacity to do without the extra time and talent that volunteers provide.” said Dr. Darienne Driver, Milwaukee Public Schools Superintendent and volunteer engagement committee chair. “We are so thankful for all of the corporate groups, community organizations, and individuals who stepped up to give their time and talent to make a difference in our community.”