You are here: Home / Posts from Community / It’s a bird, it’s a plane – It’s our Top 10 Milwaukee superheroes!
Share this... 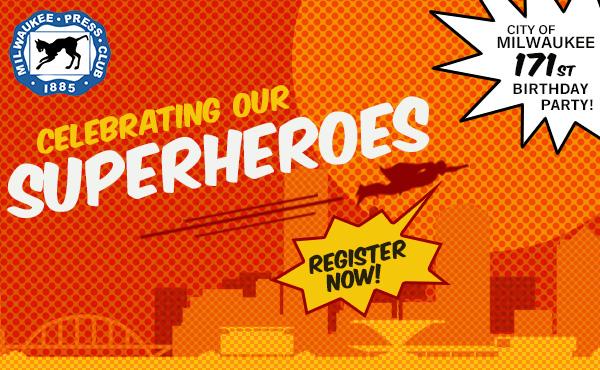 Organ donor. Education champion. Spiritual leader. Healthcare advocate. The accomplishments of our Top 10 superheroes truly are heroic. The Milwaukee Press Club is thrilled to unveil the results of our superhero search, as part of the Milwaukee City Birthday Party:

Shariff Brookens – Brookens is a Milwaukee teenager living with a life-threatening medical condition. He qualified as a Make-A-Wish recipient, but instead of choosing a wish that benefitted him, he held a fundraiser for local charities. His event raised $6,000 to support four different agencies.

Darienne Driver – Driver is Superintendent of Milwaukee Schools. She is the district’s first female superintendent and is credited with increasing attendance, improving literacy, and increasing the number of MPS high schools rated among the best in the state and nation by US News and World Report.

Joanna Eiring – Eiring is a Brookfield Municipal Court Judge who gave the gift of life to her friend, Milwaukee Municipal Court Judge Derek Mosley. When Mosley was diagnosed with end-stage renal disease and suffering from kidney failure, Eiring selflessly donated a kidney to her best friend.

Andre Ellis – Ellis started a mentoring program in Milwaukee’s 53206, the zip code that sends the most African American men to prison. He’s credited with galvanizing the community around his efforts to uplift African American youth from his neighborhood.

Tom Ellis – Ellis came out of retirement to work full time as the Executive Director of the Silver Spring Neighborhood Center. He spent 23 years at M&I Bank and used that experience to bring the SSNC back on solid footing. Ellis is making sure residents of Westlawn, the state’s largest public housing development, have access to crucial services and programs.

Fr. Tim Kitke – Kitzke has been a priest for 26 years and is currently serving at four Milwaukee parishes. He was appointed Vicar General of Urban Ministries for the Archdiocese of Milwaukee in 2015 and serves as administrator of All Saints Parish as well. Kitzke is a lifelong Milwaukeean who is passionate about serving his community.

Vincent Noth – Noth is executive director of the Riverwest Food Pantry and has helped transform the pantry into a community food center that’s changing lives and improving the well-being of the community. The pantry provides more than just access to healthy food by also connecting people to much-needed resources.

Tom Pechacek – Pechacek is the Electrical Services Operations Manager for the City of Milwaukee. He answers his phone at all hours of the night to keep the lights on for the city. Described as caring, honest and reliable, he’s credited with always going the extra mile to answer citizens’ concerns.

Precious Lives Team – Over the course of two years, the Precious Lives team told stories through print and broadcast media about how gun violence impacts communities and people. The coverage went beyond the numbers and introduced us to people and traumatic experiences impacting so may in Milwaukee.

Marty Schreiber – Schreiber is an advocate for caregivers of those living with Alzheimer’s disease. The one-time Wisconsin governor wrote a book about caring for his wife, Elaine, who suffers from the disease. “My Two Elaines: Learning, Coping, and Surviving as an Alzheimer’s Caregiver” documents his own experience as a caregiver.

The Milwaukee Press Club received dozens of nominations in its superhero search. After careful consideration, members of the Board of Governors and the City Birthday Party Planning Committee voted on the Top 10. The “superheroes” will be recognized at the event and on social media during promotion of the event.

Join the Milwaukee Press Club in “Celebrating our Superheroes” at the City Birthday Party on Jan. 26 at The Grain Exchange. Admission is $35 and includes complimentary appetizers, beer and birthday cake. Register online at milwaukeepressclub.org.