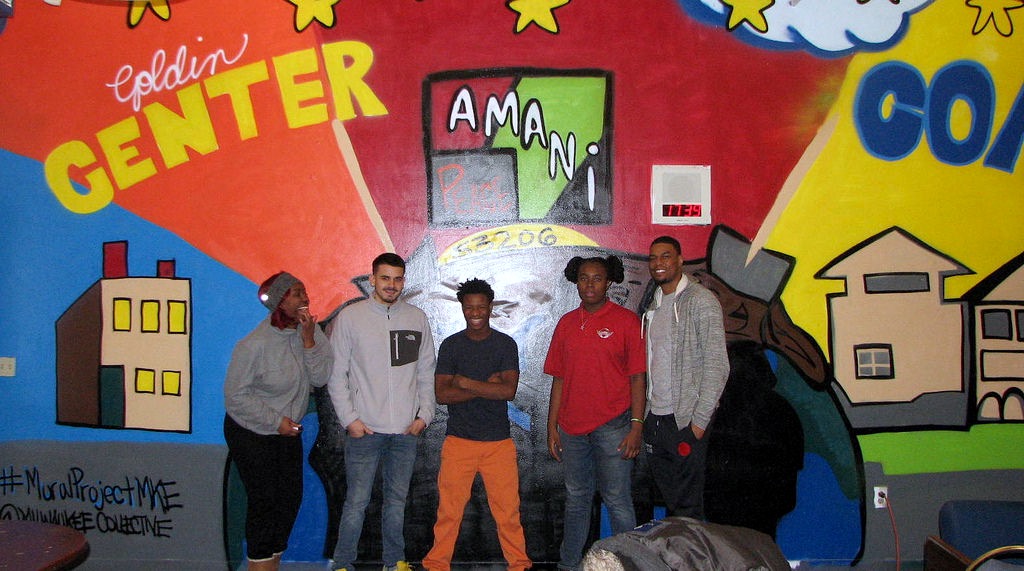 The two shovels digging into the soil at the center of a new mural at COA Goldin Center represent the Garden Project, a summer activity that planted the seeds for creation of the Amani neighborhood mural.

“The teens learned through the Garden Project that by bettering the community they are bettering themselves, so they kind of just ran with that theme while coming up for the concept for the mural,” explained Enrique Murguia, a local artist and director at the Milwaukee Collective. Last summer the teens planted garden beds in Moody Park.

The fact that the teens carried over the mindset of community enrichment from the Garden Project to the mural shows projects such as these pay dividends in the way participants think about their communities, added Marvin Jones, teen program coordinator at COA Goldin Center, 2320 W. Burleigh St.

About 20 teens were responsible for everything from the initial concept to the actual painting. Working two hours per week, the teens took 13 weeks to complete the mural. The participants rotated responsibilities, including painting, sketching and getting supplies. 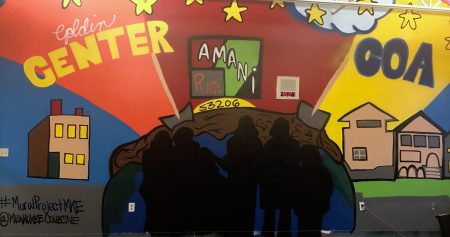 Teens at the COA Goldin Center conceptualized and painted a mural of Amani. (Photo by Keith Schubert)

The community project was funded by the Greater Milwaukee Foundation’s Mary L. Nohl Fund, and was facilitated by Murguia, Jones and artist Robert Burdette.

Jones noted that the project was special for the teens because it allowed them to get involved. “Normally someone would probably come in, paint a mural, do a great job, but do it by themselves. This mural gave us a chance to get the kids engaged.”

Phe’nice Walters, 20, and Marcus Jackson, 18, both said their favorite part of working on the mural was engaging with their friends and seeing everybody come together as one.

Aniyah Winkler said she particularly likes that the mural represents the teens and their community. “Even though there is a whole lot of violence our community, I want the mural to inspire people,” said Aniya, 13.

Walters agreed that people need look at the bigger picture. “It’s more than just thugs and gangsters in the Amani neighborhood; there’s people here who have goals, people who own their own businesses,” she said.

The mural’s purpose is to help build self-esteem in the community, said Murguia. “In the news you hear a lot of — especially in this ZIP code — negative stuff, but when we do things like this mural it shows people were doing cool stuff, stuff that benefits the community and shows that we have potential.”

According to Jones, “It’s vital to show people that there are things going in this ZIP code that you’re not going to see on the six o’clock news.”

He added, “When you see the mural it’s just happiness, togetherness and pride in our community.”