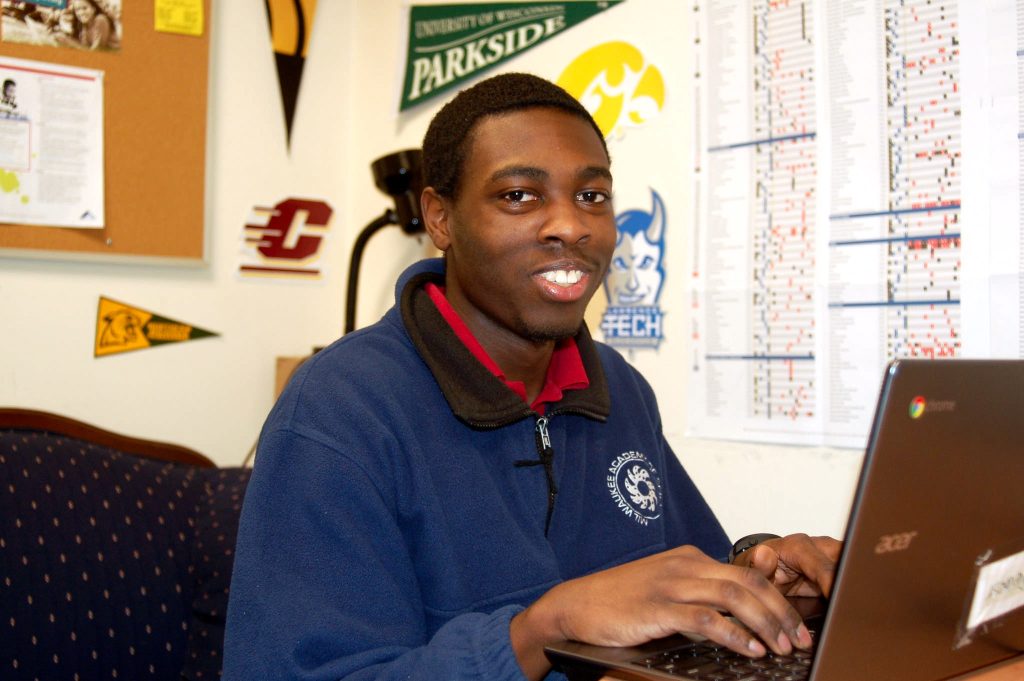 One day last semester, high school senior David Washington left his calculus class late and his father, who was waiting outside, was concerned that he was having trouble with the subject matter. David explained that he had stayed behind because he was enjoying doing the math.

The younger Washington, who transferred from Golda Meir School to Milwaukee Academy of Science in eighth grade, has always been a strong student. In middle school, he took high school algebra. In high school, he completed all of the math classes MAS offered by the end of his sophomore year. After that, the school arranged and paid for him to take calculus and, now, differential equations at Marquette University.

“At Northwestern, the students believe in the ability to pursue many passions. Many people pursue two, or even three, majors. … I hope to double major in … computer science and creative writing, two very different topics,” Washington said.

An avid reader, he is writing a science fiction novel about “a character who has powers from God and the devil,” he added. 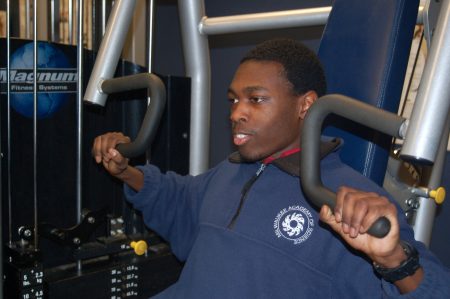 Washington likes to stay fit by working out in the school gym. (Photo by Andrea Waxman)

David was the first MAS student to take classes at Marquette, according to Youngvorst. David’s younger brother Joshua, an MAS junior, also started taking calculus at Marquette this year. In addition, David and Joshua study Latin, which is not offered at MAS, online.

“The two brothers are a pair and some people think they are twins,” said Youngvorst. She added, “David is very reserved but he has come out of his shell a lot since freshman year.”

When David and Joshua were younger, their father, a Rufus King High School graduate who studied pre-engineering at UW-Madison for two years, taught himself the computer programming language Python so that he could teach it to them. From that time on, Washington Sr. said, the boys have pursued computer programming on their own.

Last year, they worked as paid programming interns at Direct Supply, a company that provides equipment, technology and service solutions to senior living communities. The company normally only takes college students as interns. This year, David works at a Pick ‘n Save store after school and on weekends.

Anthony McHenry, principal at MAS, described David as “a high-character kid. He not only doesn’t present any challenges to the learning culture, he influences it in a positive way.” Citing his high level of math achievement, McHenry added, “David has challenged the school in a positive way as well.”

“There are just 29 seniors at MAS this year and they are a close-knit group,” noted Youngvorst, adding, “David pushes his friends to do their best.”

David Sr. and Erika Washington, who have seven children ages 3 to 20, said they chose MAS for several reasons. “The school was based on math and science and a lot of black kids don’t get good math and science educations, so they don’t get high-paying jobs later in life,” said Washington Sr., who works as the quality manager at Milwaukee Plating Company.

Citing the opportunity to study calculus at Marquette, Washington Sr. said he and his wife have been satisfied with their children’s academic experience at MAS so far. “(David and Joshua) participate in robotics and Upward Bound, and Joshua was doing tutoring at Neighborhood House,” he added.

With their eldest, a daughter, studying at UW-Platteville and their youngest not yet in school, Erika Washington, a Mississippi native who now manages a Walgreens store, wanted the five children in between to attend the same school, she said. When the children started at MAS, the family lived nearby in the Concordia neighborhood, though they have since moved to Dineen Park.

MAS, a public charter school authorized by the city, is required to take any student who applies. It is a college prep high school where all of the seniors graduated last year and all but one graduated in 2015, according to Youngvorst. Asserting that it has higher standards than Milwaukee Public Schools (MPS), she explained that MPS requires three science classes while MAS requires six. MPS requires three math credits; MAS requires four. “We want students to be successful (and continue to progress after high school) and we support those who choose a trade, technical school or the military,” Youngvorst added.

Most of the students at the K-12 school come from low-income households. The enrollment in the high school is 194 students, 98 male and 96 female. Nearly all students identify as black/African-American.

To prepare its high school students to apply to institutions of higher learning, MAS has them complete interest inventories and explore careers early on. It hosts speakers and college representatives, holds career fairs and helps them research schools based on location, size and courses of study. Youngvorst said the school takes students to visit Wisconsin colleges and universities, and this year it took interested students on a college tour to Washington D.C., stopping at several schools along the way. Youngvorst encourages students to take the ACT prep class and works with them on applications, she said.

According to the website, the school offers a wide array of science classes including anatomy & physiology, zoology, vertebrate zoology, technological inquiry, engineering and advanced placement biology and environmental science.

Last year, 25 percent of the graduating class won full scholarships to UWM and other colleges and universities. One student was awarded a full scholarship to UW-Madison.

“My parents are always pushing me,” said David. “My dad always says he wants me to surpass him and try hard at everything I do.”