You are here: Home / Home / Carousel / City on a Hill works with youth and families to transform Avenues West
Share this... 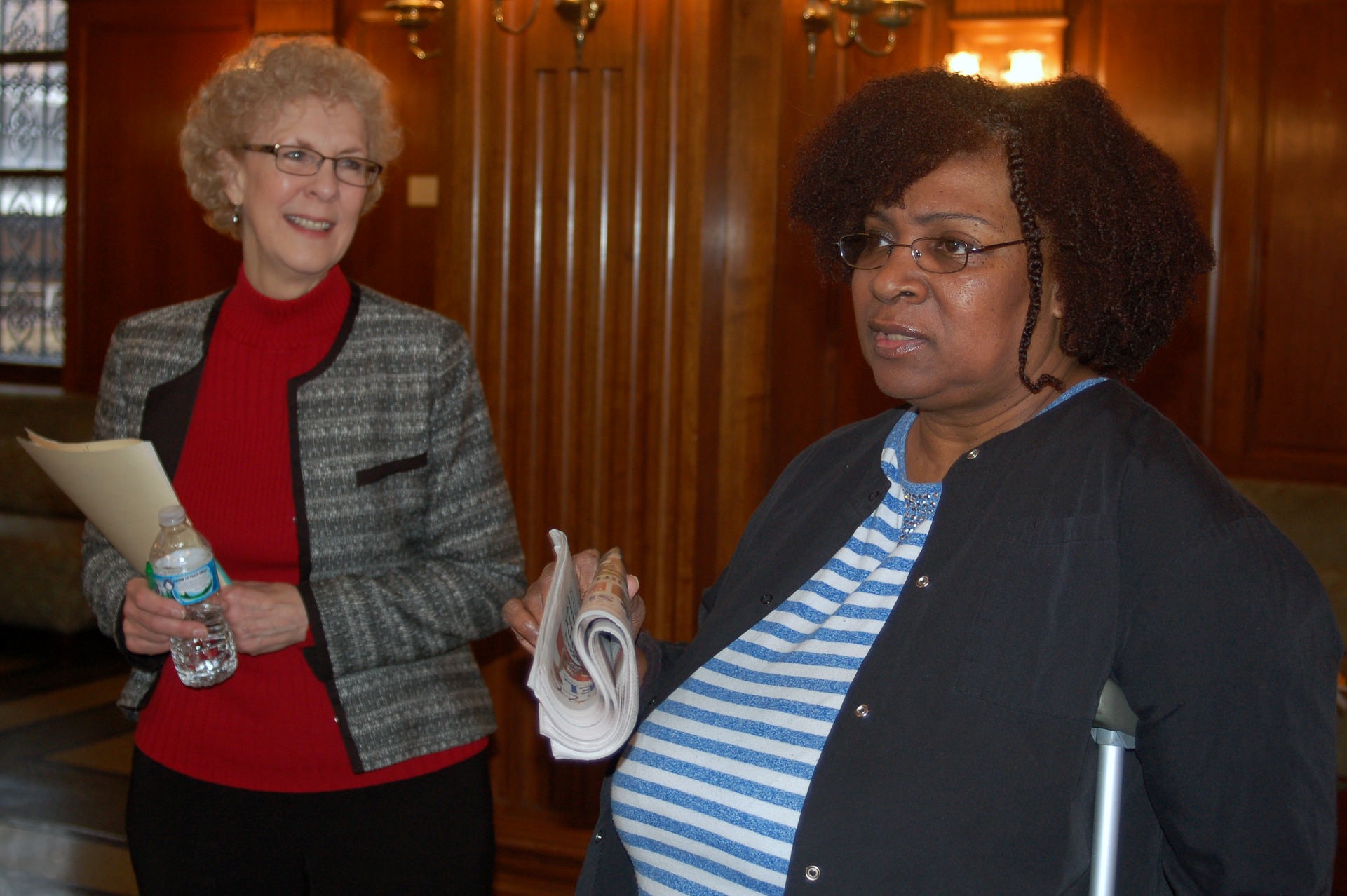 Karla Hart (right) speaks about her experience living at the Historic Lofts on Kilbourn as Diane De La Santos looks on. (Photo by Andrea Waxman)

Editor’s note: This article is one of an occasional series profiling the 15 finalists for the Milwaukee Awards for Neighborhood Development Innovation (MANDIs). City on a Hill is a finalist for the BMO Harris Cornerstone Award, which recognizes an organization for its commitment and effectiveness over time.

One day in spring 1996, Karla Hart’s partner, the father of her children, went to work and never came home. The then-pregnant mother of six struggled to make ends meet. Housing posed a particularly relentless set of challenges for Hart, who was victimized by a series of unscrupulous landlords.

Finally, 17 years after she was abandoned to raise her children alone, Hart found a safe and stable home in the Historic Lofts on Kilbourn in the Avenues West neighborhood, thanks to the faith-based nonprofit City on a Hill.

“City on a Hill has been a tremendous help. If I didn’t get in here I would probably be on the street, homeless,” said Hart, now 64, blind in one eye and suffering from several serious health problems.

In addition to developing housing for low-income people, City on a Hill pursues its mission to alleviate the symptoms of poverty, break the cycle of generational poverty, and train and engage others in solutions to poverty through a growing number of programs, services and initiatives. These include youth programs, a free health clinic and monthly health outreach, social services, a food pantry, neighborhood outreach, adult support groups, mission trips and racial reconciliation workshops.

Hart first connected with City on a Hill when her youngest child, Crystal, started to attend youth programs there at about age 10. Crystal continued to participate until she entered Alverno College in fall 2016. Though she was awarded scholarships, the financial challenges have been stressful and City on a Hill has stepped in to help Crystal with some of her college expenses, Hart said. 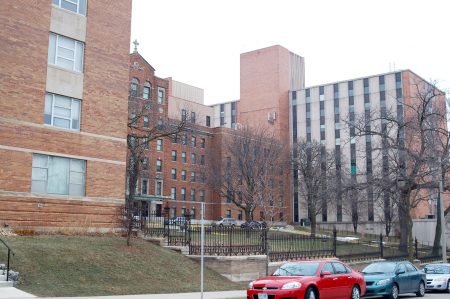 City on a Hill was established in the buildings and on the grounds of the former Sinai Samaritan Medical Center at 23rd Street and Kilbourn Avenue. (Photo by Andrea Waxman)

Hart also has benefitted from the organization’s recently remodeled free health clinic, open to anyone who is under- or uninsured, low-income or homeless. The clinic is available by appointment and is staffed by more than 100 volunteers, including doctors, nurses, physical therapists, dental hygienists, vision technicians and social workers.

On the second Saturday of every month, the health outreach team sees 300 to 350 walk-in patients.

J’Koreyia Lawson, an 18-year-old freshman at Milwaukee Area Technical College (MATC) also discovered City on a Hill when she was about 11. A neighborhood resident, she and two younger brothers attended a Tuesday evening program that includes a free dinner and worship.

Lawson participated in Youth Center classes throughout middle and high school, including a series of interactive lessons taught though the “Game of Life,” a creation of Lisa Boughton, the youth development manager. Teens learn about goal setting, time management and the consequences of decisions. Presented with choices they will face in high school, college, work and adult life, they gain awareness of opportunities that may become available and the high-risk behavior they must avoid to achieve their dreams.

Lawson also took classes in budgeting and banking, she said, and participated in City on a Hill’s educational advancement program, which provided one-on-one academic support.

The summer after her junior year in high school, she was hired to work in the youth employment program. Still employed as a youth program assistant, she mentors some of the teen girls, Lawson said.

“City on a Hill is special because of the dedicated staff that they have working with young people. It’s very apparent in their interactions with the youth that they truly care about them,” said Katie Sanders, executive director of Safe & Sound.

When City on a Hill was first taking shape in summer 2000, the group began by talking to community leaders and going door to door to discuss the neighborhood’s assets and liabilities, said Diane De La Santos, then a board member. After acquiring the former Sinai Samaritan Medical Center campus, west of North 20th Street between West Kilbourn Avenue and West State Street, in December 2000 the organization initiated an outreach strategy called Adopt-a-Block to identify unmet needs of families in the surrounding neighborhoods. Focusing on building relationships and breaking down racial barriers, staff and volunteers mowed lawns, ran kids programs and held neighborhood events. They helped with immediate needs and made neighbors aware of City on a Hill’s programs and resources, said De La Santos, who became executive director in 2003.

In 2004, City on a Hill and two developers built the Historic Lofts on Kilbourn, 99 mixed- income one-, two-, and three-bedroom rental apartments. In 2011 the partnership completed the William A. Passavant Senior Living Apartments comprising 43 one-bedroom units and eight two-bedroom units in the former hospital’s Maternity Pavilion, and additional construction adjacent to the pavilion.

This kind of affordable housing development neither gentrifies the neighborhood nor concentrates poverty, De La Santos said. There is space on the campus for further housing development and plans are underway to develop 30 to 40 rent-to-own units, she added.

City on a Hill has provided many answers to the problem of generational poverty and other issues facing the City of Milwaukee, said Keith Stanley, who has worked in the Avenues West neighborhood for 12 years. Stanley, who recently joined City on a Hill’s board, said he has been impressed with the organization’s efforts with youth, “teaching them to be better citizens, working with kids not just to get them through elementary and middle school but on to college.

“There are some amazing stories about the work Diane and the City on a Hill staff has done,” said Stanley, who is executive director of Avenues West Association, BID #10 and Near West Side Partners.

De La Santos has been at the forefront of discussions on race and segregation and issues of poverty and limited resources in Milwaukee, said Stanley, adding, “City on a Hill has positioned itself to be one of the solutions to the problems we face in Milwaukee.”