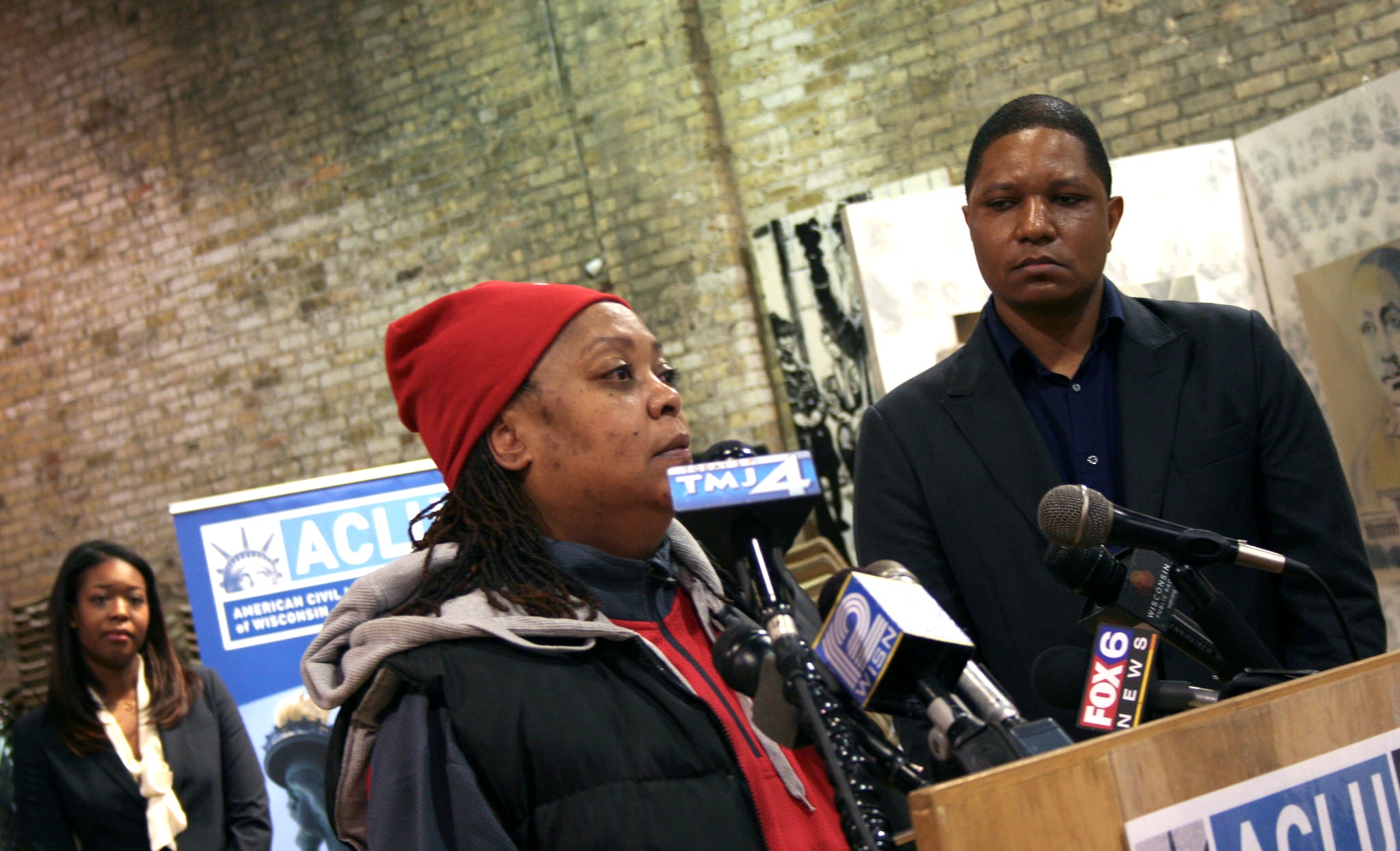 Tracy Adams’ son was 11 years old the first time he was stopped by Milwaukee police. The boy was at his friend’s front door when an officer who had driven through a nearby alley asked him to come down off the porch; the officer didn’t say why, according to Adams.

“The police officer came up on the porch and guided him towards the car, took the phone out [of] his hand — his cell phone — put it up on top of the squad car and then proceeded to pat him down,” said Adams, who is black. “That was his first stop.”

It happened two more times, once when the boy was walking through an alley after leaving a friend’s house and while on the way to school. In all three instances, he was detained without reason and released without receiving a citation, according to the suit.

“Every time my son leaves the house I’m worried. I’m worried until he comes back home and I know he’s safe,” she said. “I’m standing with him, standing with other African-American mothers who have to tell their sons constantly, ‘When you [are stopped] by the police officers, be calm, answer their questions, cooperate and you may come home alive.’”

On Wednesday, the American Civil Liberties Union (ACLU) and ACLU of Wisconsin announced a federal class action lawsuit, Collins v. City of Milwaukee, challenging what they called “the unconstitutional [and] suspicionless stop-and-frisk program of the Milwaukee Police Department.” Adams, a plaintiff in the case, made her remarks during a news conference at the Milwaukee Black Historical Society. The suit also names the Fire and Police Commission and Milwaukee Police Department (MPD) Chief Ed Flynn as defendants.

Charles Collins, 67, a military veteran and retired Certified Nursing Assistant for Milwaukee County, is the lead plaintiff in the case. Collins, who is black, recounted a traffic stop for which police did not give a reason, purportedly ran a warrant check and returned his ID without issuing a ticket or warning. Collins, who has lived in Milwaukee for 55 years, said he is constantly looking over his shoulder for police officers.

Four other plaintiffs — Greg Chambers, a 32-year-old black man; Caleb Roberts, a 24-year-old Milwaukee native attending graduate school in Texas; Stephen Jansen, 29, who has a master’s degree from the University of Wisconsin-Milwaukee; and Alicia Silvestre, a 60-year-old Latina woman who has worked in Milwaukee Public Schools for more than 30 years — are also named in the suit. Plaintiffs are seeking improved training, supervision, discipline and monitoring of officers; they are also demanding the regular release of data regarding stop and frisk incidents to ensure accountability. 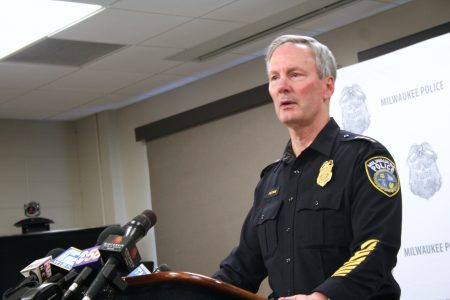 The suit alleges MPD’s policies and practices violate the Fourth Amendment of the U.S. Constitution’s requirement that an officer must have a “reasonable suspicion of criminal activity” to make a stop and a “reasonable suspicion that a person is armed and dangerous” to frisk an individual. It also claims the department’s practices violate the Fourteenth Amendment and Title VI of the Civil Rights Act of 1964, which guarantee equal protection and prohibit discrimination based on race, color and national origin.

At a news conference Wednesday, MPD Chief Ed Flynn “categorically and unequivocally” denied the allegations, citing that most of the violence in Milwaukee occurs in central city neighborhoods, which are overwhelmingly poor and non-white. He defended the department’s strategies and tactics, noting the goal is to deter crime, not “revenue-raising, harassment or the imposition of fines and warrants on people unable to pay them.” Officers are encouraged to make traffic stops, and to engage pedestrians, but often release people without a fine or ticket, according to Flynn.

“An active police department that gets out of its cars … affects perceptions of safety — it affects the fear level, it affects the fact that people believe those public spaces are being watched,” he said.

“The department has made no secret of its intentions to flood communities of color with police officers whenever parts of those communities are deemed to be hot spots for crime,” said Jason Williamson, ACLU Criminal Law Reform Project senior staff attorney. He noted, “Crime rates, or the occurrence of a particular crime, do not give the police license to ignore the Constitution.”

Williamson said, in addition to the accounts of the six plaintiffs, he and others spoke with “hundreds of ordinary Milwaukeeans” particularly black and Latino individuals who expressed “outrage, anxiety, deep frustration and a profound sense of sadness” regarding interactions with MPD during a nearly three-year investigation. In addition, ACLU lawyers attended public community gatherings, town hall meetings, public safety committee meetings and listening sessions where citizens raised similar concerns, according to ACLU of Wisconsin Senior Staff Attorney Karyn Rotker.

Flynn said that MPD does not engage in “stop-and-frisk” practices, stating that vehicle stops are made as the result of traffic infractions and department frisk policy is “grounded in constitutional principles,” meaning that officers must have “an articulable suspicion to frisk someone.”

He said MPD’s strategy was different than that of New York police, whose “stop-and-frisk” practice was ruled to be unconstitutional by a federal judge in 2013 for reasons similar to those cited in the Milwaukee suit.

“The key difference was, in New York City, they felt the need to document their interactions with an enforcement action,” Flynn said. “We avoided that trap completely.”

Based on a preliminary review of MPD data concerning police stops between 2010 and 2013, “tens of thousands of records” do not provide an adequate reason for the contact, according to Nusrat Choudhury, the lead attorney on the suit. She said more than 50,000 instances listed “suspicious person,” “suspicious vehicle,” “none” or other “vague descriptors” as reasons for the stops.

“None of these purported reasons demonstrate that an officer had reasonable suspicion of criminal activity that could justify the stop. And that is what the law requires,” Choudhury said.

Chambers, who police questioned on three separate occasions without cause, according to the suit, called the practice “a kind of targeting that has been geared towards people of color.

“As a person who does his best to stay out of trouble, it seems that, in these particular instances, there was no way I could avoid it.”

Rotker said these practices also undermine MPD’s relationship with minority communities and compromise its ability to investigate offenses and decrease crime in these communities. Choudhury said reform is necessary to rebuild that trust.

Choudhury added, “It’s time that the Milwaukee Police Department … took action, to bring their practices in compliance with the law.”

Editor’s note: This story has been updated to correct the spelling of Nusrat Choudhury’s last name. We apologize for the error.