You are here: Home / Home / Carousel / Critics fear MPS uniform policy will fail to achieve its goals
Share this... 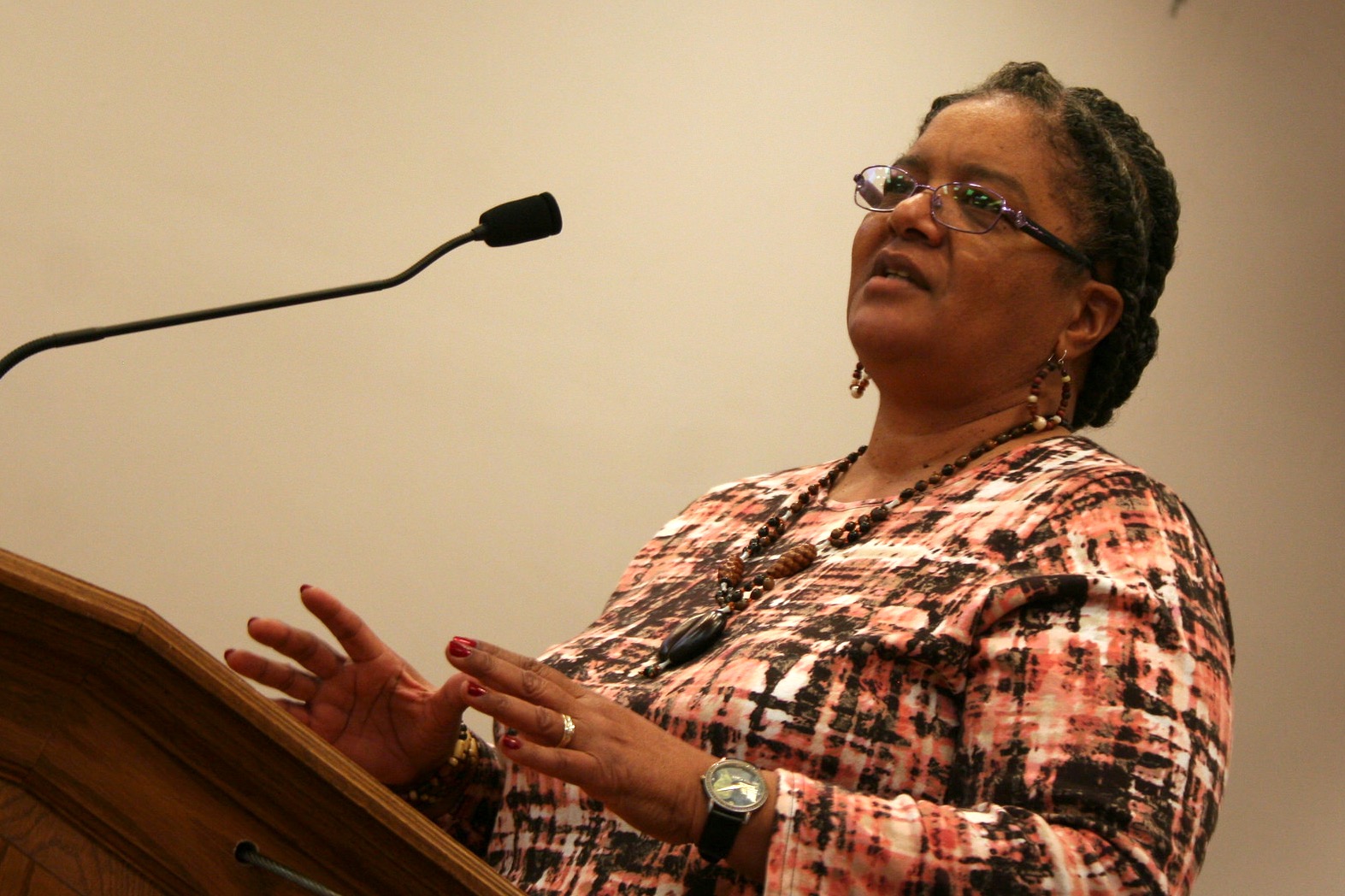 Freda Fowlkes-Bell, a longtime teacher at Washington High School, speaks in support of the uniform policy at a public hearing. (Photo by Jabril Faraj)

Critics of a new MPS policy requiring students to wear uniforms beginning next fall say it will not accomplish its goals to contribute to a positive school environment by minimizing bullying and lowering costs for low-income families.

The Milwaukee Public Schools (MPS) Board of Directors passed a districtwide uniform policy Feb. 23. The move was hotly contested at a board meeting where parents, students and a former teacher testified against the proposed change.

Three MPS principals testified in favor of the policy.

The policy, which is not mandatory, reverses current policy, said board member Carol Voss during testimony at the recent meeting. Previously, a school governance council could implement a dress code or uniform requirement, but only because of “a specific educational, health, or safety purpose.” A change at a particular school could only happen in the case of “broad-based support” from students, teachers and parents. Any modification, or rescinding, of an existing uniform policy required a petition signed by 20 percent of the school community. 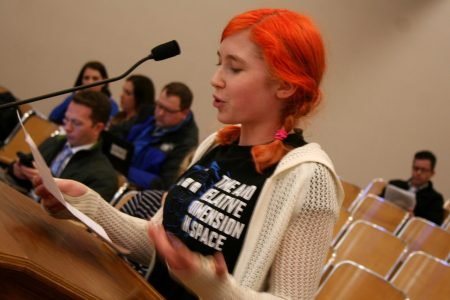 Ava Gessner, a student at Golda Meir, speaks against the uniform policy during a recent board meeting. (Photo by Jabril Faraj)

Fifty-one of the district’s more than 150 schools already have a dress code or require uniforms.

Beginning in fall 2017, every school in the district must comply with the policy unless 66 percent of the school community opposes it. The school must then send a written letter to the Regional Superintendent stating the reasons for its decision. Matthew Boswell, head of the MPS Department of Student Services, said if a school achieved the required two-thirds agreement to opt out the request would be honored.

Parents also have the ability to opt out by signing and filing an exemption form with the school’s principal.

School Board President Mark Sain said the move was made in an attempt to meet the needs of MPS families. He added that he hoped it would help create a better atmosphere for learning and noted that the pros outweigh the cons.

“The uniform policy is not a silver bullet,” Sain said. “I don’t look at this as being a one-stop-shop of stopping bullying … But I think, in some schools, it’s going to help.”

A survey conducted between Nov. 2 and Dec. 2 of last year received 11,762 responses from parents. Of the respondents, 41 percent were in favor of uniforms, 38 percent were opposed and 15 percent had no preference. About 77,000 students were enrolled in 2016-17.

According to the National Center for Education Statistics, between the 1999-2000 and 2013-14 school years, the percentage of public schools reporting they required that students wear uniforms increased from 12 to 20. Data from the 2013-14 school year, the most recent available, showed city schools were more than four times as likely to require uniforms — which are considered a “safety and security” measure — as schools in rural districts. Only 2.5 percent of schools where more than 80 percent of students were white required uniforms, compared to 43.8 percent of schools that are less than half white.

Both opponents and those in favor of uniforms questioned why the policy is not mandatory. Two students who spoke on different sides of the issue at the board meeting expressed concern that giving individual families the ability to opt out would create a clear division within schools between those who are exempt and those who are not.

“I don’t think it’s effective if it’s not something that everybody’s doing,” said Patricia Hoben, head of schools at Carmen Schools of Science and Technology, a high-performing MPS charter network that requires uniforms at each one of its three campuses. “If somebody signs up for a school and that school’s opted in for uniforms, then I think that school’s expectation should be that everybody will wear uniforms and that that school will do everything possible to make it possible for every family to participate.”

MPS will allocate $1.3 million to schools to help mitigate the cost of uniforms. Many of those who testified said that amount, about $17 per student, would not significantly help struggling families. Eighty percent of MPS students are considered economically disadvantaged.