You are here: Home / News / Arts and Recreation / Local artist paints the stories of All Peoples Church
Share this... 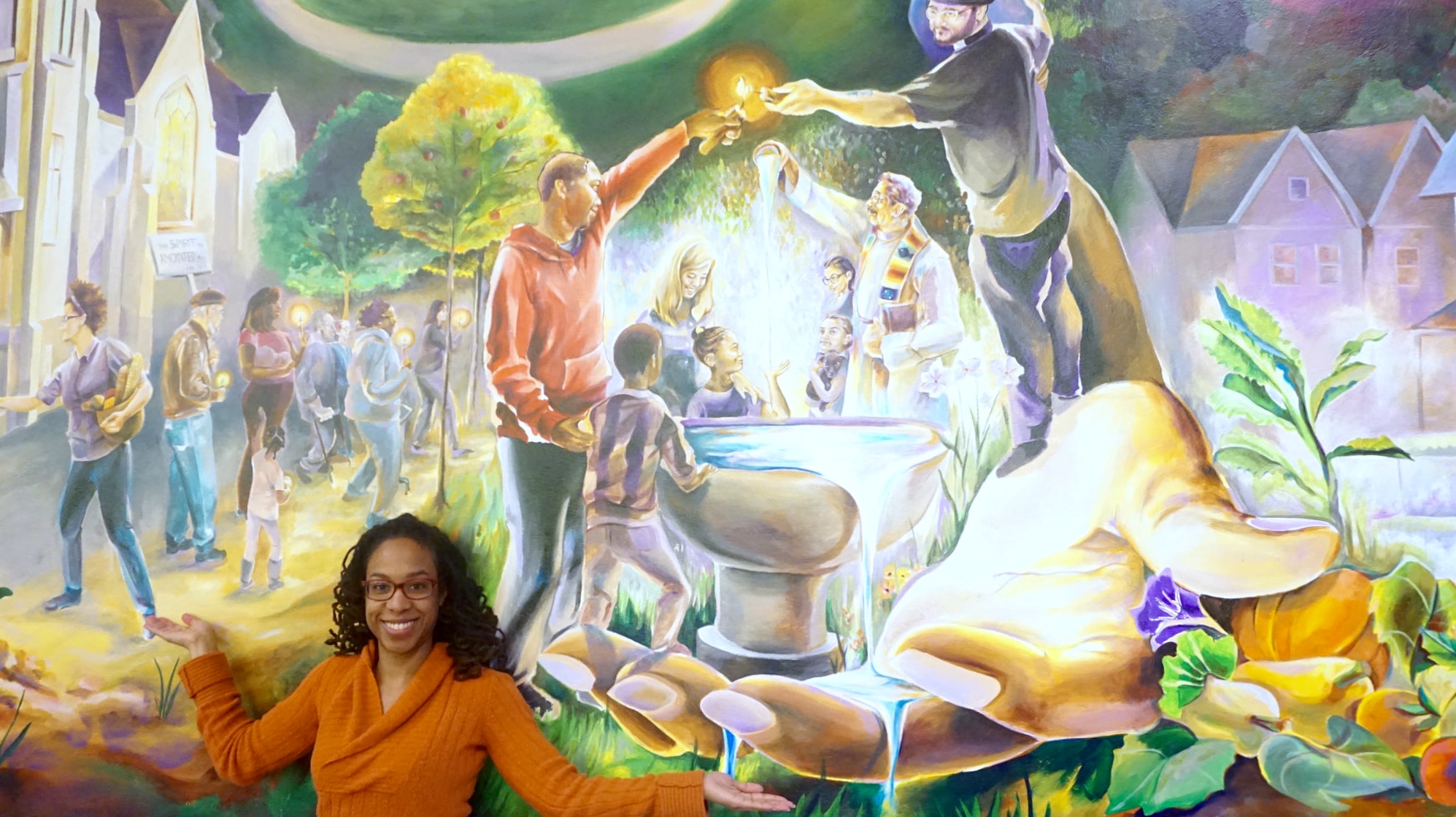 It took artist Tia Richardson six months to create the new mural at All Peoples Church. (Photo by Camille Paul)

Phylisha Dixon, 17, started coming to All Peoples Church in Harambee three years ago after moving to the area eight years ago from Chicago. She began participating in a church program called Kids Working to Succeed, which teaches children discipleship and leadership.

“I joined KWTS to get to know the church and the area,” she said. “I like being here; it makes me feel like I am a part of some big family.”

When Milwaukee artist Tia Richardson sought out church members to volunteer to be portrayed in a new mural depicting All Peoples Church, Dixon agreed.

Dixon also worked with Richardson and other youths to create a banner for the church’s community garden, located across the street. “It shows people that we can join together and make things better for the community,” she said.

“The Love that Holds Us” is a 14- by 18-foot mural painted on the wall closest to the sanctuary doors. 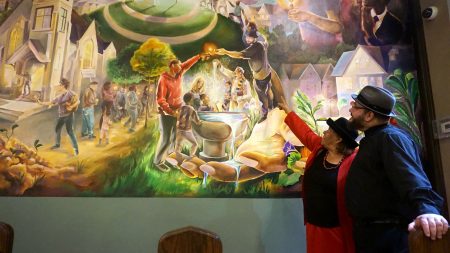 The Rev. Steve Jerbi and Willie Mae Cotton point to their images on the mural. (Photo by Camille Paul)

Richardson began the project in August 2016 after receiving a $6,000 grant from the Evangelical Lutheran Church Association. “When we dreamed this four years ago, I always had Tia in mind,” said Jerbi. “She continues to be someone that inspires me.”

The mural displays the story of a community and the seven principles of All Peoples Church: kids come first; we make disciples; we serve soul food; we partner for justice; we provide a sacred space; we teach the Bible and prayer; and all peoples means all peoples.

Richardson led several workshops for volunteers from the congregation to share their personal stories to be depicted in the mural. She also asked volunteers to paint ideas for the mural using watercolors.

“I had people paint watercolors of what they thought the mural should be like and looked to see what stories those told,” said Richardson. “Many of the important themes from those paintings had to do with loss, family and the light of the spirit.”

Viewing the mural from left to right, several scenes display the church’s seven principles. In the first scene, Xavier Thomas, All Peoples Church youth director, comes from a dark forest and approaches a church. David Nunley, the church’s musician, is shown exiting the church extending a light in the darkness.

“To me, [the mural] represents a welcoming,” said Nunley. “Everything about this mural defines All Peoples Church. It’s to be a hope and light to the world we live in, for anyone out there who needs love.”

Also on the mural’s left side is the image of Amber Davis, 17, a member of the congregation who painted a watercolor that Richardson used for inspiration. Davis is offering Thomas a basket of food, which represents serving food for the soul. 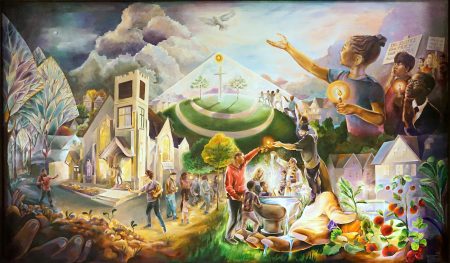 To the right of the church, Dixon and a group of people are seen holding candles and walking away from the building. “I left that up to interpretation,” said Richardson. “They could be walking toward the apple orchard and cross, or could be watching the baptism happening at the fountain.”

Moving toward the center of the mural, Thomas leaves the woods and joins a group that includes an image of a 6-year-old girl who attends the church with her family and is a main character in the mural.

“All of the subjects in the mural are being led by a child,” said Richardson. “This represents another core value of All Peoples Church’s mission, which is kids come first.”

The mural also includes homes, candles, vegetables grown in the community garden, a labyrinth leading to a cross and two apple trees.

“The homes show where the church is located within the neighborhood,” said Richardson. “The candles are also meant to show that everyone has a light.”

Anna Lamer, Amber Davis’s mother, said that participating in the mural project reconnected her to the congregation.

“I love being in it. At the time I was going through a dark portion in my life and I didn’t want to do anything,” Lamer said. “The planning and development of the mural brought a sense of belonging and community. My placement in the mural helped regain my connection to the church.”

Mary McCuiston, a member of the congregation, and her three daughters Jamera, 13, Janiah, 11, and Serenity, 2, all love the mural.

The mural will be dedicated at All Peoples Church, Harambee campus, on Sunday, April 2 from 2 to 4 p.m.

Editor’s note: This story was updated to correct the amount and source of the grant to create the mural. Amber Davis’s last name also was incorrect in the original version. We apologize for the errors.