You are here: Home / Posts from Community / Dr. Martin Luther King’s Beyond Vietnam 50th Anniversary Read-in and Discussion
Share this... 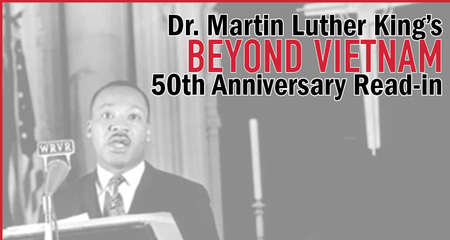 A Read-In to mark the 50th anniversary of Dr. Martin Luther King’s historic speech on April 4, 1967 – “Beyond Vietnam” – when he offered his most radical critique of racism, militarism and extreme materialism in the U.S. Dr. King was assassinated exactly one year later (April 4, 1968) on the eve of the launch of the Poor People’s Campaign which would declare poverty a human rights violation.

After the speech is presented, there will be a discussion on its meaning then and for today, including George Martin and Rev. Joseph Ellwanger, longtime activists in the civil rights movement & who worked with Dr. King.  This is part of a national movement of popular education by the Movement for Black Lives, United for Peace & Justice, and Veterans for Peace. Local sponsors include: the Martin Luther King Justice Coalition, United Methodist Women, End the Wars Committee of Peace Action – WI, Vets for Peace, National Lawyers Guild, Progressive Moms of Milwaukee and UBLAC (Uplifting Black Liberation and Community). St. Francis Church played a historic role in hosting civil rights movements in Milwaukee in the mid 1960’s.  Labor donated.