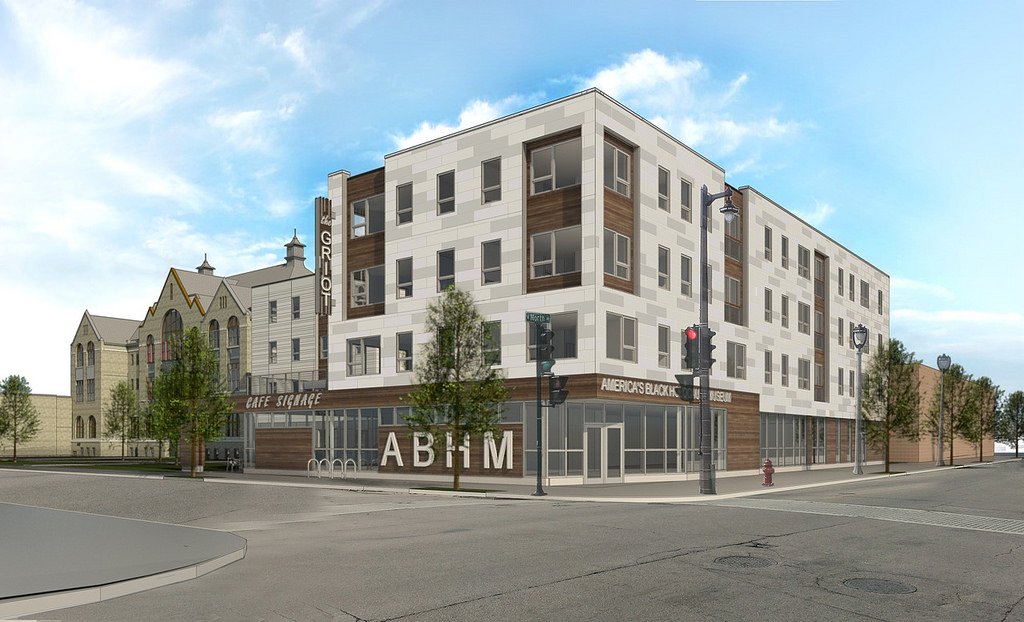 A rendering of The Griot, on the corner of 4th Street and North Avenue. (Photo courtesy of ABHM)

On a recent, rainy morning in Bronzeville, Milwaukee’s historic black culture and arts district, Adekola Adedapo leads a crowd of community members and city leaders in singing “Lift Ev’ry Voice and Sing,” a song often referred to as the Black American National Anthem.

The gathering, a groundbreaking celebration for the new $17 million Garfield Development, was attended by Mayor Tom Barrett, Wisconsin Lt. Governor Rebecca Kleefisch, city alderpeople and supporters of America’s Black Holocaust Museum. Expected to be complete by early next summer, the development includes converting the old Garfield School into mixed-income apartments and creating a new mixed-use building. “The Griot” will house 41 apartments, a cafe and the museum, which has not had a physical location since 2008.

“I think of the rain today as this — it is the ancestors weeping. They are weeping tears of joy. Because of today; because of this groundbreaking; because, after nine years … we are here,” said District 6 Ald. Milele Coggs of the museum’s return.

America’s Black Holocaust Museum (ABHM), founded in Milwaukee in 1984 by Dr. James Cameron, who survived a lynching attempt as a teenager, was a mainstay in Bronzeville. It provided access to artifacts collected by Cameron, guided tours and a place for community discussion for more than 20 years. 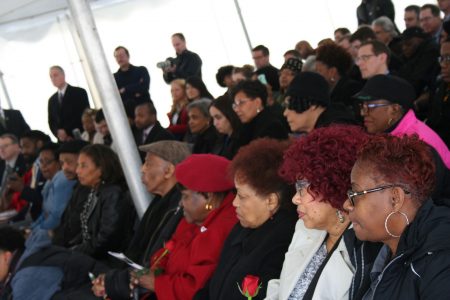 In 2008, the museum — whose mission is to build public awareness of the harmful legacies of slavery in America and promote racial repair, reconciliation, and healing — closed under financial pressure at the onset of the Great Recession. Since then, it has operated as a virtual museum that has been visited by millions of people from more than 200 countries.

Coggs, who was elected for the first time almost nine years ago, said her first meeting as an alderwoman was with Reggie Jackson, the museum’s head griot, about bringing back a physical location.

“We’ve been able to have a presence through public programming but without the artifacts it hasn’t really been the same,” said Jackson. “That’s what people really want, and they want a space that can, kind of, belong to the community once again.”

The Griot will be located on the southwest corner of 4th Street and North Avenue, the same location as the original museum.

“It’s such a jewel,” Markasa Tucker, a community activist, said of the museum, which she visited with her mother as a child. She remembers meeting Cameron, who passed away in 2006, and hearing his story. Tucker stressed the importance of the type of education ABHM provides, particularly since it isn’t readily available, even in classrooms.

Many who spoke at the event talked about their years-long involvement with ABHM and the work it has taken to get to this point.

Goins, 34, got her start in development more than 10 years ago as a participant in the Associates in Commercial Real Estate (ACRE) program, which recruits and trains minorities for professional careers in the field of commercial real estate. Goins pushed forward with the Garfield Development, which has been in the works for about two-and-a-half years, despite revealing at the event that her young daughter was born with a blood disorder and will have had 20 transfusions by her second birthday in August.

She encouraged attendees to look for ways they can help move their community forward.

Winston added, “Without community, there is no city. The city is not the buildings, it is the people.”

Virgil Cameron, James Cameron’s son and an ABHM board member, said he is happy to see the museum coming back, but that the finish line is far ahead.

ABHM is launching a capital campaign to raise $1.5 million, which will support the buildout of the museum and hiring staff; currently, ABHM staff members are volunteers, which Jackson said is not sustainable.

“My father is smiling right now,” Cameron said, adding, “We need to understand that the really hard part is just beginning. We need to continue the work.”

Dannette Justus, a literacy coach at Siefert Elementary School, brought four of her students to the groundbreaking. Justus, who knows Goins personally, said she brought the young women so they could “see history being made.”

“I just think it’s important that they get to see their ‘hidden figures’ right here in their community,” Justus said. “And I hope they just take away that they really can do anything. The possibilities are endless.”

Coggs added, “As bad as statistics and other things may say this city is, I know this: it is as great as we make it.”