You are here: Home / Home / Carousel / Four College Possible grads on track to beat the odds
Share this... 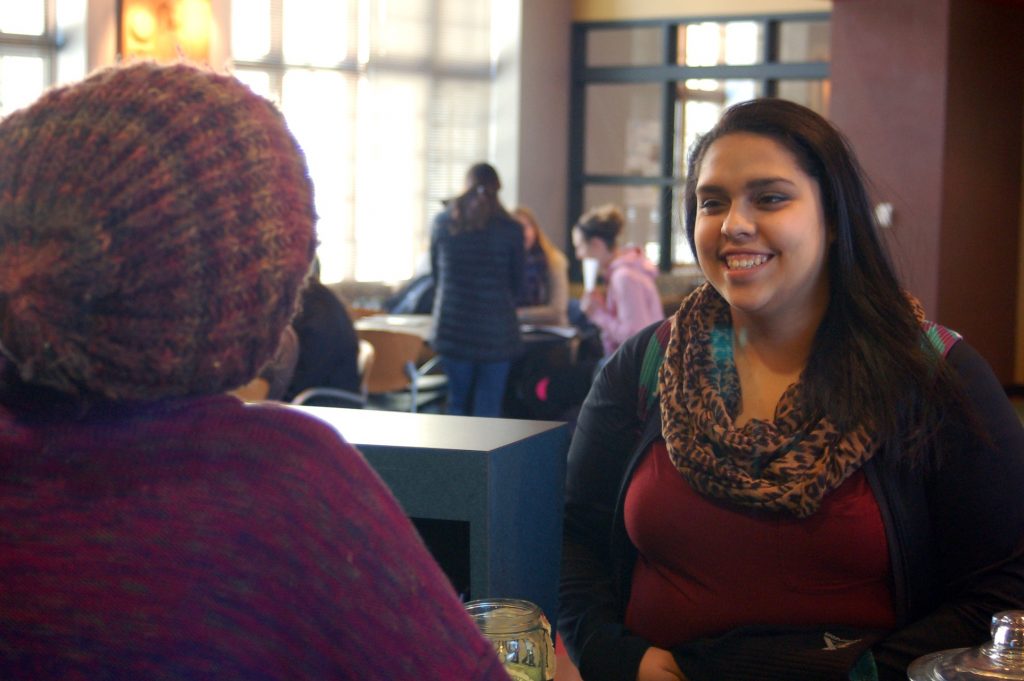 Editor’s note: In spring 2013, NNS started an occasional series of stories about four graduating high school students who participated in a program that helps students from low-income families get into college and earn a degree. Four years later, we checked back to see how they are doing.

After living in a dorm freshman year, Peter Khanthavong, the youngest of nine children of Laotian immigrant parents, moved back home to the Merrill Park neighborhood.

He did so, he said, “to save money at first and then … my brother (who was disabled and living at home) passed away and … my mom needed the emotional support.”

Khanthavong’s widowed mother has since fallen ill and now requires kidney dialysis. He takes care of her and pays most of their living expenses.

College students such as Khanthavong, who comes from a low-income family, have to overcome so many obstacles to graduate that, nationally, only 11 percent do so in six years, according to Kelly Schaer, program director at College Possible, an organization that provides such students with coaching and support to get into college and earn a degree.

All four high school seniors who Milwaukee Neighborhood News Service started following in 2013 are likely to beat those odds, earning bachelor’s degrees in four or five years. Nationally, students across all income levels graduate at a rate of 58 percent, Schaer said.

Nury Plascencia and Darneisha Virginia, seniors at Mount Mary University will graduate on May 13. Pa Nou Xiong, a Marquette University senior, plans to participate in a graduation ceremony on May 21, and finish her courses in the fall 2017 term. And Khanthavong, a UW Milwaukee junior, expects to complete his degree requirements in spring or summer 2018. 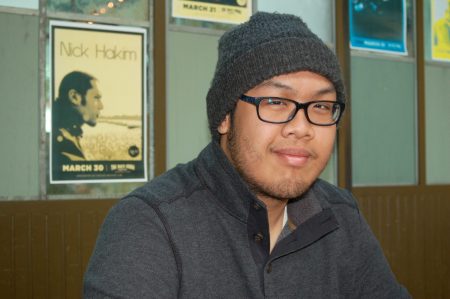 Peter Khanthavong came out of his shell and made many friends at UW-Milwaukee. (Photo by Andrea Waxman)

Khanthavong initially planned to major in computer science but difficulty with his first programming course led him to change to information science and technology. Majors in this field work in application and software development, security, web design, desktop support, and database and library resources management, according to Khanthavong.

A year ago, he found a paid information technology internship at a West Allis e-commerce company, where he helps with product listing, inventory management, troubleshooting the website and, occasionally, shooting product information videos.

“This is the best job I’ve had,” Khanthavong said, adding that he’s learned so much about business, markets, trends and pricing.

Because he has struggled academically, Khanthavong needs two extra semesters plus three credits, which he hopes to take during winter or summer break next year.

He attributes that struggle to too much socializing, especially sophomore year. “From a social standpoint (that year) was really, really fun because I stepped out of my shell and met all these people,” including one who became his girlfriend.

“I started feeling a lot more like I belonged to UWM right around (that time),” Khanthavong said.

Xiong also revised her academic goals during her sophomore year at Marquette. As a freshman, she planned to pursue a five-year degree and become a physician’s assistant. But like Khanthavong, when a fundamental course, organic chemistry, proved too difficult to master, she decided to double major in sociology and Spanish for health professions instead.

“I thought I wanted to save lives but in the last few years I’ve found out that there’s more than one way to save a life,” Xiong said. Medicine can save a person, but so too can help with financial, psychological and relationship problems, she added.

Xiong has found her sociology courses to be especially interesting for the insights they have given her about race, class and social structures. 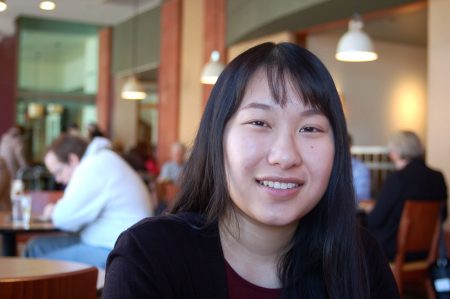 “I feel like I resonate with what I learned in (classes like) social inequality because a lot of it applies to me … coming from a lower social class and being a child of immigrant parents. I see a lot of myself in the stories we read in class,” Xiong said.

Xiong, who has lived at home all four years, does not feel like she fits in at Marquette but that doesn’t bother her, she said. She made most of her friends through the Educational Opportunity Program (EOP), a scholarship and academic support program, during the summer before freshman year when they lived in the dorms and took classes together, she explained.

”I probably could have had more fun and more friends if I had lived on campus. I think I probably would have done a lot better in my classes as well,” she said, noting that she took the bus everywhere so it was difficult to participate in late night study sessions and social events and then get home safely.

For two years Xiong has worked for 16 to 26 hours a week as a Walgreens pharmacy tech.

Plascencia, a Caroline Scholar, and Virginia, a Grace Scholar, have worked at paid jobs, put in 300 community service hours per year and are graduating in four years. In addition to building many strong friendships with the women in their scholarship programs, both have found deep meaning in their service work.

“It was the … service required each year by the Caroline Scholars program that inspired me to change (my major) from business to justice,” Plascencia said. Volunteering at the immigrant advocacy nonprofit Voces de la Frontera for seven of her eight college semesters gave her the opportunity to manage a legal aid clinic, help immigrants apply for DACA status and citizenship, and teach citizenship classes.

“The main thing I learned was different people’s stories and the way that different social justice issues (intersect and) impact their stories,” Plascencia said. “It’s not just that this person is an immigrant; he’s also suffering from poverty and no health insurance,” she explained.

Working with Voces clients, she looks for “solutions and (works to help) them live a normal life without being discriminated against, without feeling like they’re ‘the other,’” she added.

Plascencia, who married her longtime boyfriend last summer, lives in the dorm during the week and goes home on weekends.

She hopes to pursue a legal career but is looking for a full-time job “to pay the bills.” She plans to study for the LSAT and continue volunteering at Voces on Saturdays, she said. 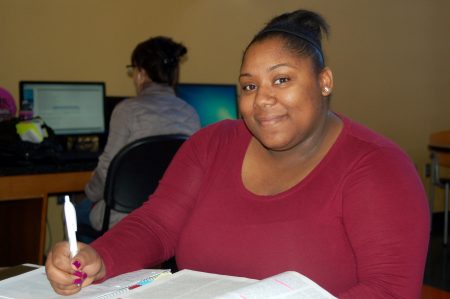 Darneisha Virginia looks up from her work in the Cyber Cafe at Mount Mary University. (Photo by Andrea Waxman)

Virginia is the only one of the four students in this series who is graduating with the major she planned to pursue from the beginning — social work.

“I was tempted to change at first because it was … overwhelming but there hasn’t been another major that I feel as strong and passionate about, other than counseling,” she said.

Virginia hopes to earn a master’s in social work or counseling. This summer, she is planning a road trip with friends to visit graduate programs at out-of-state schools.

While holding down a full-time third-shift job, she also works a part-time second shift job and another occasional job. “I’m … able to complete my internship hours and work and also (go to) school because I’m able to do homework at work,” she said, adding that both her employers and her professors are flexible and supportive.

Virginia’s internships have given her experience helping vulnerable people in a variety of ways. As an intern at a hospice facility, she comforted the bereaved, including children who had lost family members. She is currently an intern at Wisconsin Community Services, an agency that, among other services, assists people convicted of crimes on conditional release due to mental illness. Virginia helps clients find housing, clothing and other necessities, and ensures they are taking their medications.

All four students said that if they had not participated in College Possible’s high school program, they would not have gone to college.

The program provides coaches all the way to completion of a bachelor’s degree.

According to Schaer, College Possible has added seven Milwaukee high schools in the last five years and now offers its program in 14 schools, mostly in MPS. The six-year college graduation rate for College Possible students who graduated high school in 2010 is 54 percent.

Xiong sees the difficulties her high school friends have gone through in order to graduate, compared to students at Marquette. Those problems include lack of financial resources, family demands and the need to earn money while going to school.

She said, “I think we (four) are really fortunate that we were ambitious enough to work hard for what we wanted and, even more, that we had the support we needed when we needed it.”