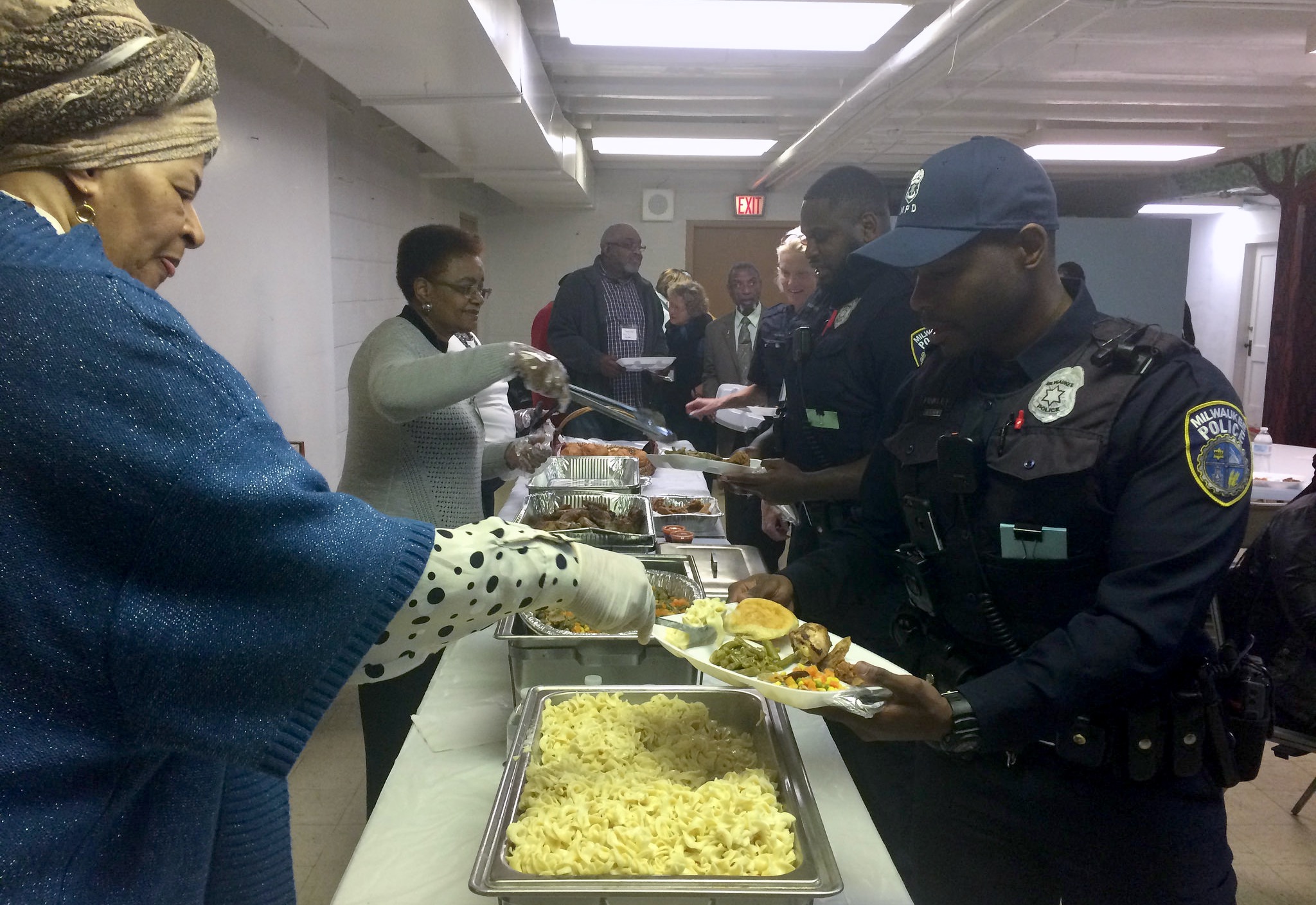 Melvin Finkley (right) and other MPD officers shared a meal with residents before the dialogue. (Photo by Jabril Faraj)

It started with a noticeable divide. City police officers sat on one side of a church basement as residents occupied the other. But by the end of the night — after dinner and an hour or so of structured conversation — officers and residents talked, joked and laughed together.

“The ball got hit out of the ballpark this evening,” said James C. Thomas, an assistant pastor at Lighthouse Gospel Chapel, 3512 W. North Ave., where the event was held. “This is the greatest thing that I can think of, to have police officers come to a black church, sit down share and talk with parishioners, especially in the inner city.”

The dialogue, the first in a yearlong series of listening sessions in Metcalfe Park, was a step toward a better police-community relationship, according to residents and Milwaukee Police Department (MPD) officers who attended.

Metcalfe Park, bounded by 27th and 38th streets, North Avenue and Center Street, is in its second year of the talks. The listening sessions were piloted last year in Amani, Harambee and Metcalfe Park, areas that have had issues with police-resident interaction. They are organized and facilitated by the Frank Zeidler Center for Public Discussion, a Milwaukee nonprofit whose mission is “to foster civil dialogue and invite trust in the midst of differences.” This year, dialogues will also take place in Clarke Square and Sherman Park.

“It’s an opportunity for them to humanize each other, residents and police,” said BilliJo Saffold, a Zeidler Center facilitator and member of the Metcalfe Park dialogues organizing committee.

Saffold explained that the intention is to bridge the gap in a relationship that is often contentious, particularly in central city communities — many of which are overwhelmingly black. The sessions, which consist of listening circles where individuals speak from personal experience, are meant to provide a space for conversations that don’t typically happen, Saffold said. 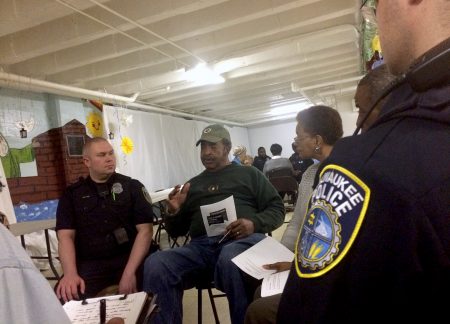 James Thomas (center) speaks about the importance of trust as MPD officers, and other residents listen. (Photo by Jabril Faraj)

The relationship between MPD and the city’s black population has been increasingly strained.

In 2004, Frank Jude, a mixed-race man, was beaten within an inch of his life by at least six white off-duty and on-duty Milwaukee police officers. Three of the officers were convicted in federal court after being acquitted in a state trial.

In 2011, 22-year-old Derek Williams died in the back of an MPD cruiser after cops ignored his pleas for help. Dontre Hamilton, a 31-year-old unarmed black man with a history of mental illness, was shot 14 times in a downtown Milwaukee park in 2014. No officers we charged in the Williams or Hamilton cases. Most recently, 23-year-old Sylville Smith was shot and killed by Dominique Heaggan-Brown, who will be the first MPD officer to face a homicide charge for conduct while on duty.

In 2015, the City of Milwaukee agreed to pay $5 million to 74 plaintiffs who sued the city over illegal strip and body cavity searches performed by MPD officers between 2008 and 2012 in District 5. Only one officer involved served jail time.

MPD Chief Ed Flynn has pointed to high rates of gun ownership and a culture of violence among young black men to justify disproportionate enforcement in Milwaukee’s central city.

Earlier this year, the Wisconsin ACLU filed a suit against the City of Milwaukee and Flynn that alleged the department’s policies and practices resulted in racial profiling, violating the Constitution and Civil Rights Act.

Thomas said the damaged trust must be mended, adding that there is fault on both sides. He called the listening session “a critical door-opener for better communication between the black community and the police department.”

“This would change their view of these black youth, and the black youth of the police officer,” Thomas said.

About 15 residents and eight police officers attended the dialogue, a turnout Zeidler Center facilitators said was considerably lower than last year, when they “had to turn people away.” Last year residents were offered $15 stipends to attend, but funding for stipends — a large part of the program’s budget — was not available this year. The program is funded by the Greater Milwaukee Foundation and Northwestern Mutual Foundation.

In addition to the Zeidler Center and MPD, partners include Safe & Sound and the Milwaukee District Attorney’s Office.

One of the attendees was 10-year-old Moses Taylor-Cross. He said he enjoyed being part of the event and that he talks with police all the time. He’s not afraid of them, just their guns, and said he thinks people should make the effort to get to know officers better.

“If you don’t know someone what’s the point of not liking them?” he asked.

“They’re human, too,” added Justin Smith, 17, an area resident and youth member of the planning committee.

Smith, who also participated in last year’s discussions, said that, though he’s never personally had a negative interaction with police, he’s seen family members, who are darker-skinned, profiled for “being in the wrong place at the wrong time.” He said that though his family didn’t understand his participation in the dialogues at first, once he explained it, they have encouraged him; many family members have participated since.

“I see myself in him,” said Melvin Finkley, 33, who has been an MPD officer for almost four years. Finkley, who grew up in Chicago housing projects, said he came from a “chaotic” environment, much like Smith. It was the reality of growing up in that environment — and the loss of life it caused — that inspired him to want something better for himself.

“It’s not just the older people looking for change,” Finkley said. “We can definitely reach the youth, even if it’s one at a time.”

“It’s going to take work. I mean, it’s baby steps,” MPD Officer Dorian Ratliff said of building a relationship between police and the community. Ratliff, who served seven-and-a-half years in Metcalfe Park before becoming a citywide volunteer coordinator, added, “Things like this will help get us there.”

Thomas said he would like to see the program “spread over the entire central city of Milwaukee,” and hopes that more black churches and pastors will get involved.