You are here: Home / Community Voices / Planting hope through storytelling
Share this... 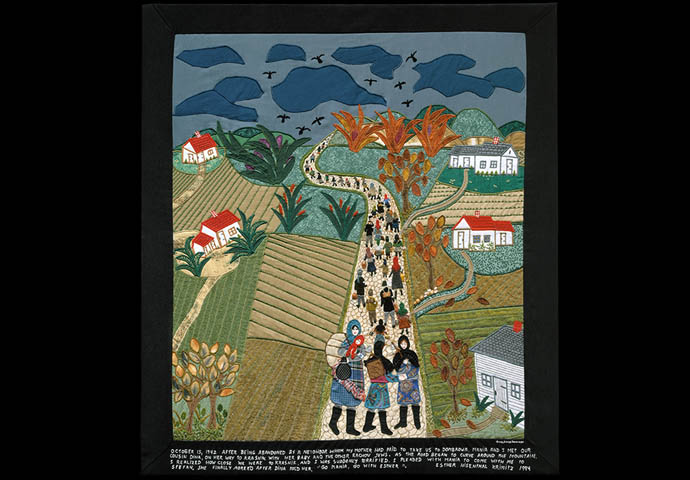 Rick Deines, a conversation facilitator with The Zeidler Center for Public Discussion, urges Milwaukeeans to visit the current exhibit at the Jewish Museum, which tells the story of Holocaust survivor Esther Krinitz through collage and embroidery.

“Esther Nisenthal Krinitz was 15 when she defied Nazi orders, separating from her family as they and the other Jews of their Polish village reported to a nearby train station. Making their way to a village where they were unknown, Esther and her younger sister survived the war by posing as Polish farm girls. They never saw their family again.

“Fifty years later, determined to show her daughters the family she had lost, Esther turned to needle and thread to create a series of 36 hauntingly beautiful, exquisitely detailed works of fabric collage and embroidery — a legacy born of love, loss, and the sheer force of memory.”

These words come from the promo of the Jewish Museum in Milwaukee publicly announcing its current exhibit that closes on May 26. It is a gift to us, free to attend at the museum located at 1360 N. Prospect on the lower east side. It is a fine contribution to the ever-growing “storytelling” occurring across Milwaukee.

But how many Milwaukeeans from across the cultural and economic spectrum know about it or are enabled to attend? How can we as a community expand this awareness and make the invitation and actual participation a greater reality? It is one way for us to build and strengthen community in our city.

And these are the “little gems,” the “hidden treasures,” the “serendipitous moments.” These are opportunities that we haven’t planned for but sometimes break into our consciousness and care is shifted.

Esther Krinitz in this exhibit is both artist and historian. In fact, as I walked through the 30-some pieces of embroidery I was so caught up in one (history) or the other (the artistry) that it took more attention from me to appreciate how both art and history make this exhibit so powerful.

That is often the case with good storytelling and Milwaukee has numerous examples of this activity. There is a group named Ex Fabula that is committed to strengthening community bonds through the art of storytelling. The Hmong share their history through the story cloth. Public art increasingly reveals some of the unheard stories in our neighborhoods. Recovery groups provide ongoing opportunity for healing through sharing stories of addiction. Veterans groups use storytelling to come to terms with the pain and joy in their lives.

Too often these activities are publicly unknown or unrecognized. Yet they express the deeper dimensions of what distinguishes and binds us together. They are so important.

That is one value of the Esther Krinitz exhibit. And while seemingly familiar, the Jewish Holocaust is a story that begs re-telling — until 6 million stories are told. This is the human experience at its best and its worst. Devil and angel. Horror and courage. Cowardice and bravery. We need reminders of both ways human beings can react to shifts in social contexts. With a nation as divided as we are in the U.S., it may become increasingly necessary to be clear about who we are and why.

And art. Because the embroidery is so beautifully presented, it might be easy to miss the dark side of Esther’s story. The colors are bright and expressive but in stark contrast with the struggle, they add to one’s realization of what happened. Esther and her sister found their way out of the immediate death brought on by the Nazis to their village. My imagination was jolted time and again as step after step they moved with resolve to a new place. Their lives were forged out of the circumstances of the imminent death of their loved ones and fellow Jews.

Venues like the Irish Cultural Heritage Center on Wisconsin Avenue and the American Black Holocaust Museum, which is beginning construction of a new site at 4th and Garfield, contribute their part to shaping a narrative that reflects the diversity and the common humanity of the Milwaukee community.

We owe a deep gratitude to these storytellers and purveyors of history who often slip under the public radar. They get too little attention. They need community support and exposure.

At the same time, extra effort is needed to give people maximum opportunity to access these events. Lack of information is a form of poverty and restriction.

Milwaukee is building community with those who tell these stories. John Gurda, Dasha Kelly, Adam Carr and Reggie Jackson are but a few examples of those carrying the narrative of our city. Storytelling is “in” and with good reason. Without stories we miss both the singularity and the complexity —the life-giving dimensions of the experience of our neighbors.

The Jewish Museum invites us all into Esther’s world. And you may experience one of those rare moments of raised consciousness and deepened care.