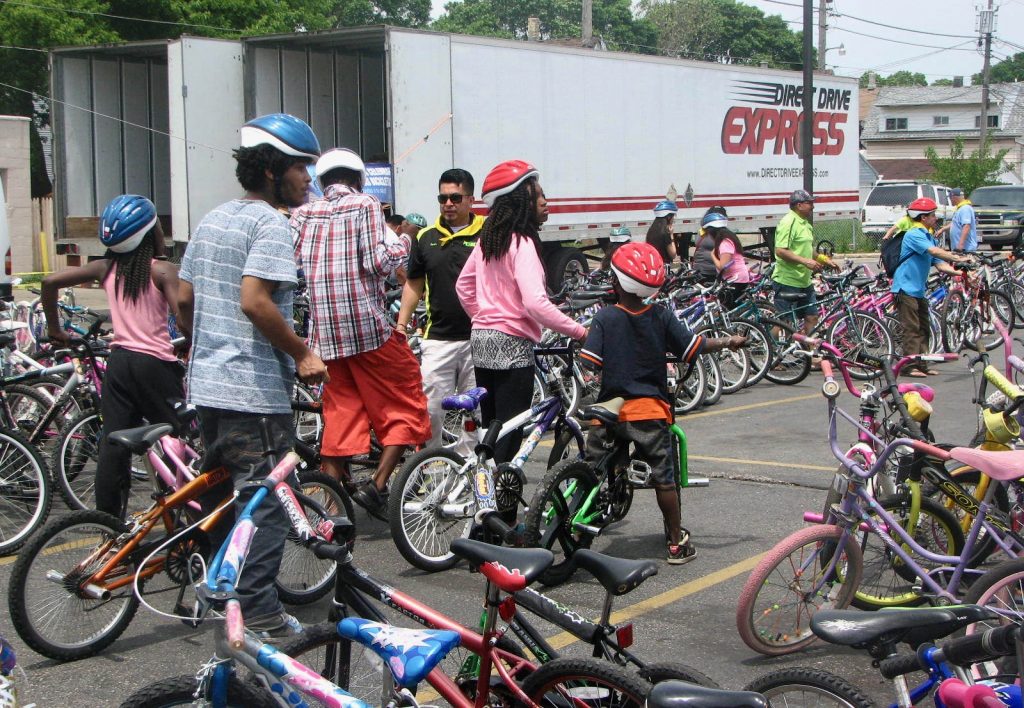 Young people line up around the block to receive free bicycles. (Photo by Lydia Slattery)

Despite the sweltering heat, children raced toward a large, inflatable obstacle course stationed in the middle of Cesar E. Chavez Drive. Others lined up for their chance to give it a try at the sixth annual Southside Bicycle Day and the third annual CiclovíaMKE.

Organizers of the two events joined forces to bring people out to socialize and promote biking in South Side neighborhoods. From noon to 4 p.m. National and Greenfield Avenues were closed to cars from Cesar E. Chavez Drive to Layton Boulevard allowing attendees to walk and bike freely with family and friends. Booths set up along the streets distributed information about community programs.

“The purpose of the event is to encourage people to live a healthier lifestyle, especially in preventing obesity. It’s easier to prevent obesity than to treat it. Biking is a simple and affordable way to do that,” said David Waters, a pediatrician at Sixteenth Street Community Health Centers and co-founder of Southside Bicycle day. 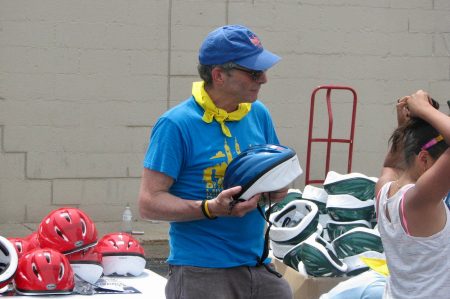 Waters was volunteering with Dream Bikes to give away more than 1,000 children’s bicycles. Bike recipients were also given helmets and bicycle locks for safety. To receive a bicycle, attendees had to have their event passports stamped at several booths along the route, including at Bublr Bikes, a bouncy obstacle course and a face-painting booth. People lined up around the block to receive free bikes.

Waters said he believes in more open streets and wants drivers to be more responsible toward bikers and pedestrians.

“We want people to be able to dance in the streets if they want to,” he added.

This year organizers created a more interactive event by gathering community organizations to participate and hand out information to attendees, according to Juan Lopez, a coordinator for CiclovíaMKE and a resident of Bayview. “It seems that this event is really doing well this year. People seem to really be enjoying themselves,” he said.

Sitlalic Aguilar, a resident of Clarke Square said, “I’m very involved in the community and I’m here to encourage kids and their parents to bike instead of drive around in cars, especially within the neighborhood.”

She praised the event saying it benefits everyone in the community, the environment and people’s health. There was a great turnout, she added.

Claudia Mejia, a resident of Riverside, attended with her daughter, Lizabeth. “We came out here because it was something fun to do, and get out of the house this Sunday afternoon,” Mejia said.

The next CiclovíaMKE is planned for August 20 on the South Side, Lopez said. The exact route is yet to be determined, but Cesar E. Chavez Drive will be included, he added.