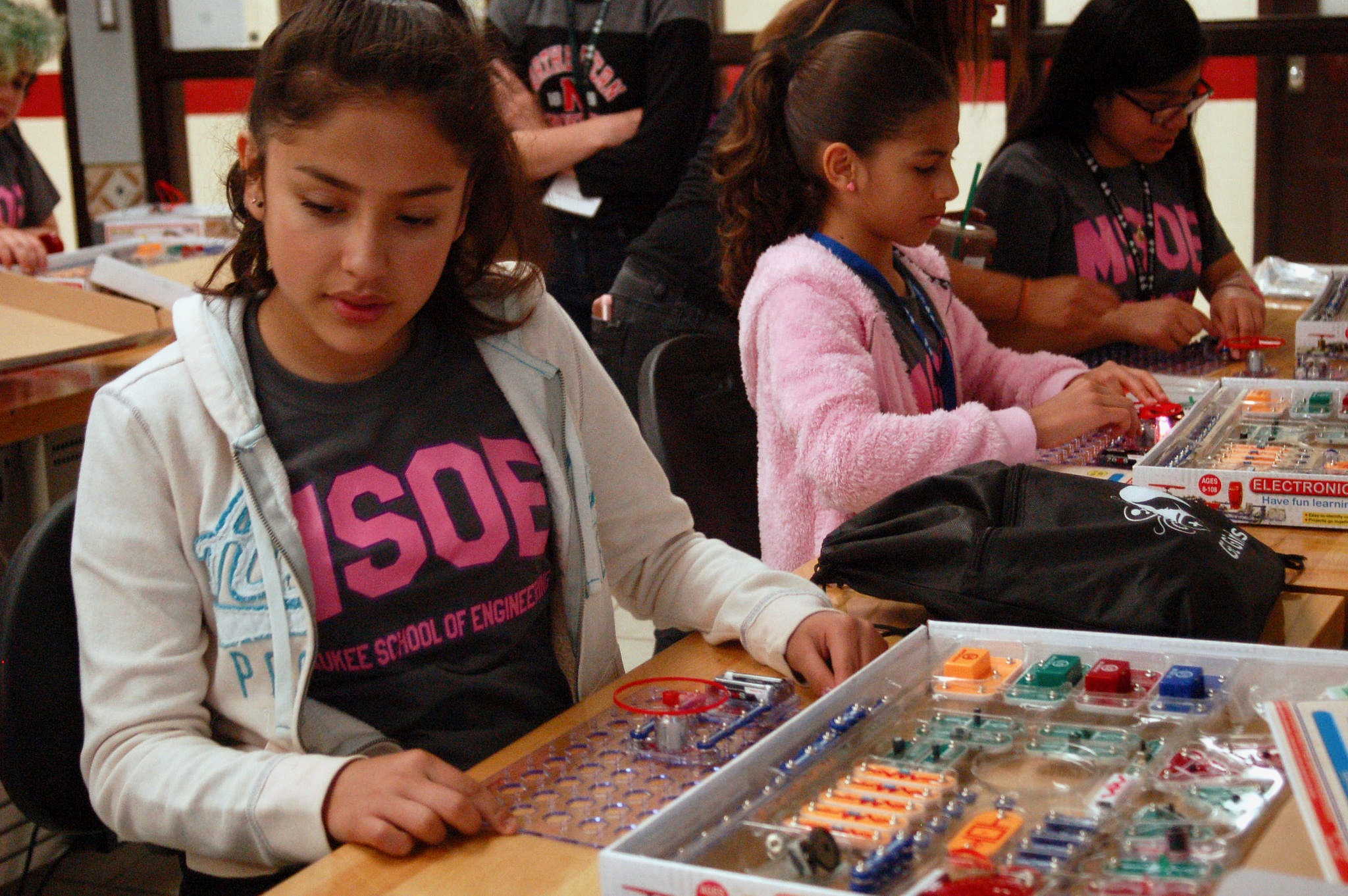 As an incoming eighth grader at Hayes Bilingual School, Esmeralda Léon knew she had a natural talent for math and science, yet never thought about a future career in STEM (science, technology, engineering and math).

“I didn’t know anyone who worked as an engineer or even in science. It wasn’t until my friends told me about GE Girls that I thought about a career in STEM,” said Esmeralda.

Esmeralda is one of six girls from Hayes, out of a total of 36 girls, invited to participate in the five-day GE Girls program, which ran through June 19. Featuring classes, mentorship and team-building activities, GE Girls is an annual summer program intended to foster and develop middle school girls’ interest in STEM. 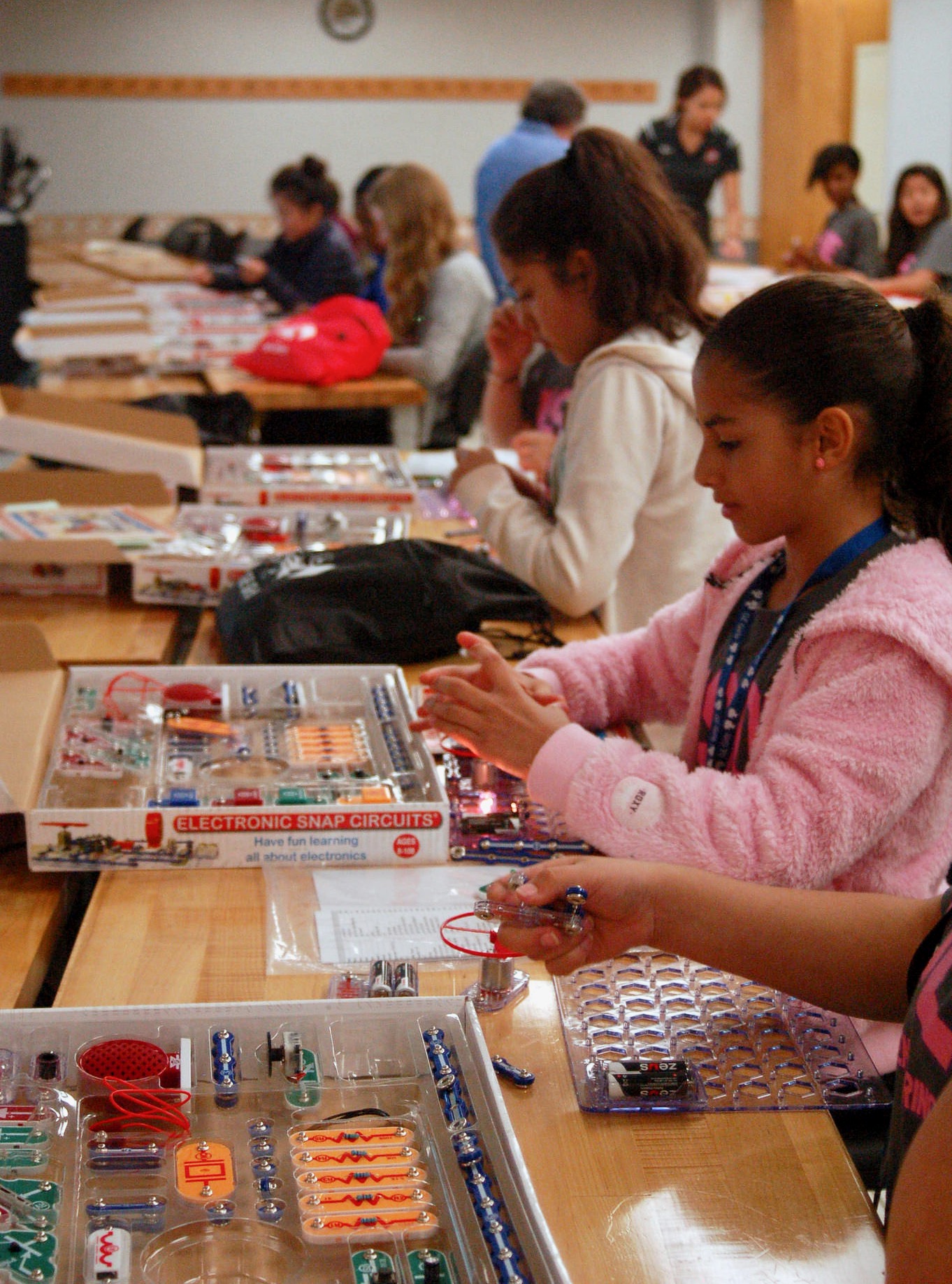 Natalie Perez Rivera places a fan on a Snap Circuit board. (Photo by Hailey Richards)

“I know girls who were good at math and science but didn’t have anyone encouraging them to continue or show them how they can use that talent, so they completely missed out. Here I have people motivating me to explore the idea of a future in STEM,” said Esmeralda.

She acknowledged having doubts about the program, but was later excited about the opportunity when her parents, immigrants from Mexico, impressed upon her the importance of exposure to STEM careers.

“I’m really excited to learn more, especially about healthcare technology. I know that I can work hard and push myself to be anything when I grow up,” she added.

Offered free of charge to participants, the program sprouted from a challenge from GE CEO Jeff Immelt to introduce more women to STEM careers.

According to Pam Washburn, GE Girls co-coordinator, only one of four people in STEM is a woman. By the year 2020 GE hope to increase that to 50 percent.

“When it comes to women in STEM there are so many obstacles that begin at such a young age,” said Washburn.

Studies show that middle school is the critical time during which girls strengthen or lose interest in STEM, according to GE Girls.

Washburn attributes the scarcity of women in STEM to a lack of exposure and role models. “The goal of GE Girls is to find girls who are primarily on the fence when it comes to enjoying science, and give them exposure to STEM, while motivating and inspiring them,” she added.

Over the past six years, 176 girls have participated in the program, which includes activities such as jewelry making to emulate supply chain management, soldering and building electronic devices with “Snap Circuits,” an educational toy that teaches children about electricity.

Irais Cabral, a science teacher at Hayes, has selected 11 girls to participate during the last two summers.

“When I choose girls to be a part of this program I often think about the socio-economic background that many minorities come from that can be limiting to exposure or role models in STEM fields,” said Cabral.

According to a report by the Girl Scouts Research Institute, “African-American and Hispanic girls have high interest in STEM, high confidence, and a strong work ethic, but have fewer supports, less exposure, and lower academic achievement than Caucasian girls.”

“We want the girls to know that they don’t have to stay in a certain field, career or even neighborhood,” said Cabral. “These girls will know that with passion and drive they can choose to be anything.”

Natalie Perez Rivera, an 11-year-old participant from Hayes, grew up in Puerto Rico and moved to Milwaukee about a year ago.

“I didn’t know what kind of careers were available to me until I came here,” Natalie said of the program. “I wake up every day excited to be here. All the women are so inspiring.”

“When we went to see the engines at GE Power … I was so happy to know that I could be there one day. I just don’t understand how anyone can say women can’t do this or that when I can see them doing it perfectly well myself,” she added.