You are here: Home / Home / Carousel / Open housing marcher says ‘state of the city has gotten worse’
Share this...

Editor’s note: This is one in a series of 15 pieces about the Milwaukee Open Housing marches, which took place 50 years ago beginning on Aug. 28, 1967.Download a free copy of “The Long March to Freedom” ebook, a compilation of all the articles in this series.

Earl Bracy didn’t notice his picture being taken, but 47 years later, it would be on a pamphlet about segregation in Milwaukee.

In the iconic photo, Bracy, 68, is gripping the American flag, participating in the 1967 open housing marches alongside the Rev. James Groppi and hundreds of black Milwaukee residents.

The pamphlet, titled “Fulfill The Promise,” was created by Greater Together, a nonprofit organization that promotes racial and economic equity.

In Bracy’s view, “The state of the city has gotten worse, which is alarming because as we progress things should be getting better.”

Bracy decided to participate in the marches as a young man because he felt what he called “the sting of racism”: discrimination because of the color of his skin.

He and fellow marchers demanded open housing and better treatment by the police department. Bracy recalled that the police repeatedly followed him home for no reason from the Freedom House, the meeting place of the NAACP Youth Council.

“[At] 27th and Wisconsin you’d see a police officer pulling a black man over,” Bracy said. “A few blocks further and you’d see the same thing.” 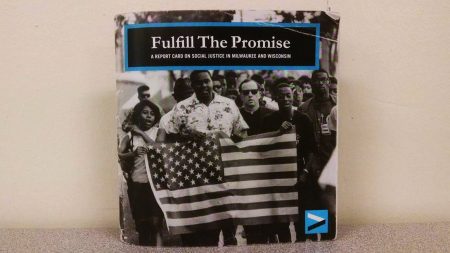 He often felt weighed down by the racism he encountered. Referring to the white counter-demonstrators, Bracy said, “It was kind of an invasion of their territory — that’s the way I saw it.”

A psychologist who works with youth and families, Bracy said he thinks the younger generations are not as invested in social change as people were during the marches. “I don’t see the same zeal in a lot of the young people,” he added. “Sometimes they don’t really buy into what’s happened in the past.”

According to Bracy, the younger generation doesn’t appreciate or strive to learn about the sacrifices made during the marches, contributing to the lack of progress.

“A lot of them are just clueless,” Bracy said. “They can walk through doors and the doors are wide open, but they don’t know why.”