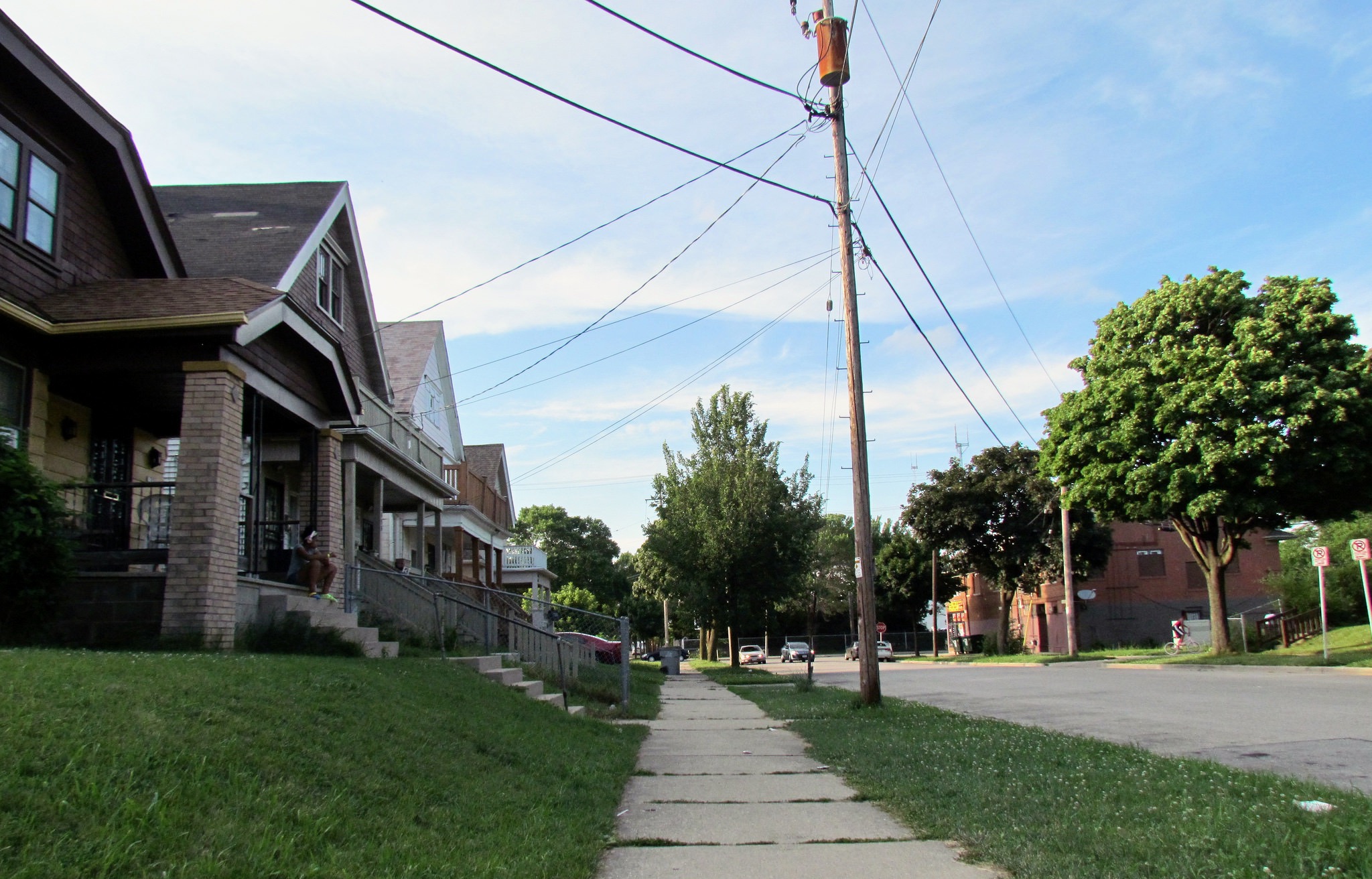 Every home on this North Side block has a lead lateral. (Photo by Jabril Faraj

The issue of lead exposure for children is a “public health crisis,” according to a top Milwaukee Health Department official, who also acknowledged the city has a “resource problem” when it comes to addressing it.

Dr. Geoffrey Swain, professor of family services at the University of Wisconsin-Madison and medical director at the Health Department, said in an interview with Milwaukee Neighborhood News Service that children are particularly at risk for exposure because of the delicate nature of their brains. High lead exposure for children can cause irritability, restlessness and lower intelligence. It has also been linked with criminal behavior.

“If you are an adult, unless you have an overwhelming exposure to lead … a little bit of lead is not something that we are prioritizing,” said Swain. “We are prioritizing trying to prevent children, whose brains are still developing, from being exposed to lead,” regardless of the source. 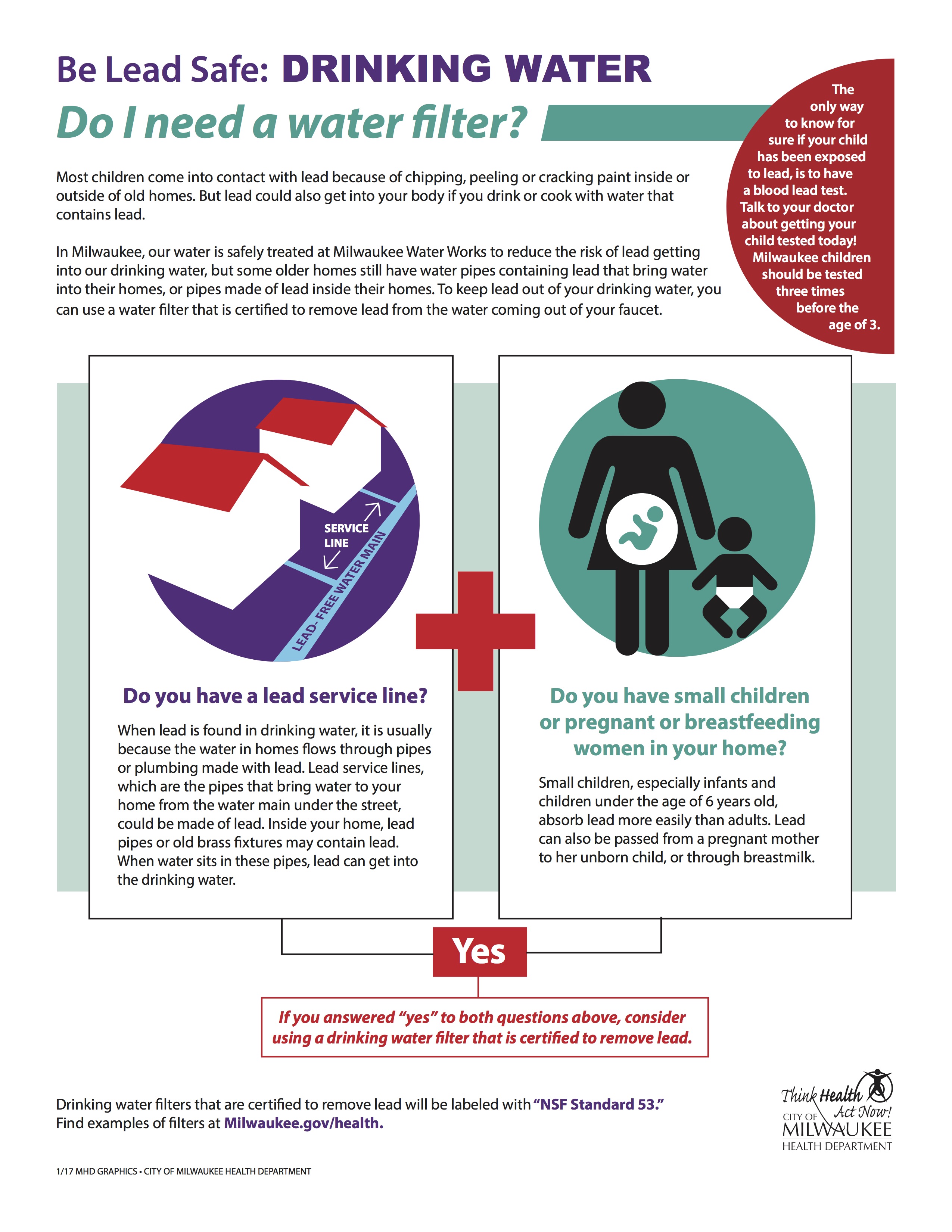 The Milwaukee Health Department distributes this flier to inform residents about whether to use a water filter.

More recently, the issue of lead in water has been elevated nationally as a result of the water crisis in Flint, Michigan, where city officials misled residents about the safety of drinking water coming from a contaminated source for more than a year.

Milwaukee’s water is safe when it leaves the treatment facility but can be contaminated by lead lateral service pipes that deliver water to homes. Lead service lines, and child lead poisoning cases, are primarily concentrated in low-income, communities of color in the city, according to Health Department data.

Swain said there is “no question” the more than 70,000 lead lateral service lines in Milwaukee should be replaced. However, complete replacement, estimated to cost more than $700 million, is simply not possible, he said.

The Health Department currently recommends that Milwaukee households with pregnant women, women who are breastfeeding or children under the age of 6 where lead service lines are present should have lead filters installed on water taps. The department provided more than 1,700 filters to pregnant women and children under 6 receiving services at WIC clinics, the Sixteenth Street Community Health Center and the Social Development Commission in 2016. It plans to distribute 3,000 more this year.

Marc A. Edwards, an environmental and water resources engineering professor at Virginia Tech University, has researched the subject of lead in drinking water for more than 25 years and was one of the individuals who exposed the water crisis in Flint. Swain called Edwards “a fearless advocate for preventing childhood lead poisoning.”

According to Edwards, “the financial resources issue is real,” adding, “We are going to probably have to learn to live with this lead pipe hazard for 10, 20, even 50 years in some cities in this country because the money just isn’t there right now and … these programs take a long time to implement.”

He said there has been a “paradigm shift” after “decades of misinformation about the nature and extent of the health threat from lead and drinking water.” Until the U.S. Environmental Protection Agency releases a new Lead and Copper rule — expected in 2019 — and there is funding to remove and replace lead laterals “we have to work together to cost-effectively fill the gap,” said Edwards. He called for a “major effort” to get people the right information so they can protect themselves and their families.

Edwards said educating the public about the risks of lead exposure “is not that costly,” adding, “The danger of not knowing that you have this hazard (a lead lateral) in front of your house is real.”

Despite creating a public awareness website in English and Spanish, mailing information to properties with lead service lines and initiating a partnership with Molina Healthcare to provide free testing for children, city officials have been criticized for a lack of urgency and openness regarding the risks of lead in water.

Sherrie Tussler, executive director of the Milwaukee Hunger Task Force, who, after a recent test learned she had high blood lead levels, went to the city’s website for more information about lead sources in her home but said she couldn’t find any useful information. Hunger Task Force has launched its own education campaign on its website.

Program Manager Lisa Lien said the volume of calls to a number listed on the Childhood Lead Poisoning Prevention Program website and Health Department fliers has been increasing, which she attributed to the program’s outreach efforts in the nine ZIP codes in which it operates. Activities include canvassing neighborhoods, attending community meetings and providing fliers to libraries.

Four of six residents interviewed by Milwaukee Neighborhood News Service who live in homes with lead laterals were not aware that that their units were serviced by lead lines, and also were unaware of the risks related to lead exposure. Nancy Centeno, whose 2-year-old grandson lives in the unit she’s rented for about four years, said she was “shocked” and “a little upset” to find out that city officials are aware of the issue and that she wasn’t.

Some of the residents interviewed suggested Facebook, libraries and news outlets such as the Milwaukee Courier and Milwaukee Community Journal as places the information should be disseminated. Others said a phone call or signs posted where lead service lines exist would get their attention.

District 14 Ald. Tony Zielinski, whose district includes the most homes with lead laterals in the city, recently introduced a resolution that would direct the Health Department to expand its current recommendations to consider any woman of childbearing age (15-45) at risk for lead poisoning; recommend that at-risk groups — regardless of whether they live in a home that has a lead lateral — not drink unfiltered tap water; and test children under 6 for lead. It also would direct the Health Department to issue a media advisory, update other materials and issue written recommendations to health care partners to reflect the change.

In a May 8 letter, Commissioner of Health Bevan Baker opposed the measure, saying it “is in conflict with current evidence-based research.” He added that if the department were directed to make such recommendations “the confidence of Milwaukee clinicians in all advice from the MHD may be eroded.”

Zielinski said the resolution, which will be considered at a Public Safety and Health Committee meeting on July 20, is “the beginning of an educational and awareness campaign to help reach out and connect with as many people as possible.” He added that he is open to amending the resolution, but has not discussed it with the Health Department.

“My driving force here is to make sure that we get the right information and we provide the best health information and … advice to people that are most vulnerable,” Zielinski noted.