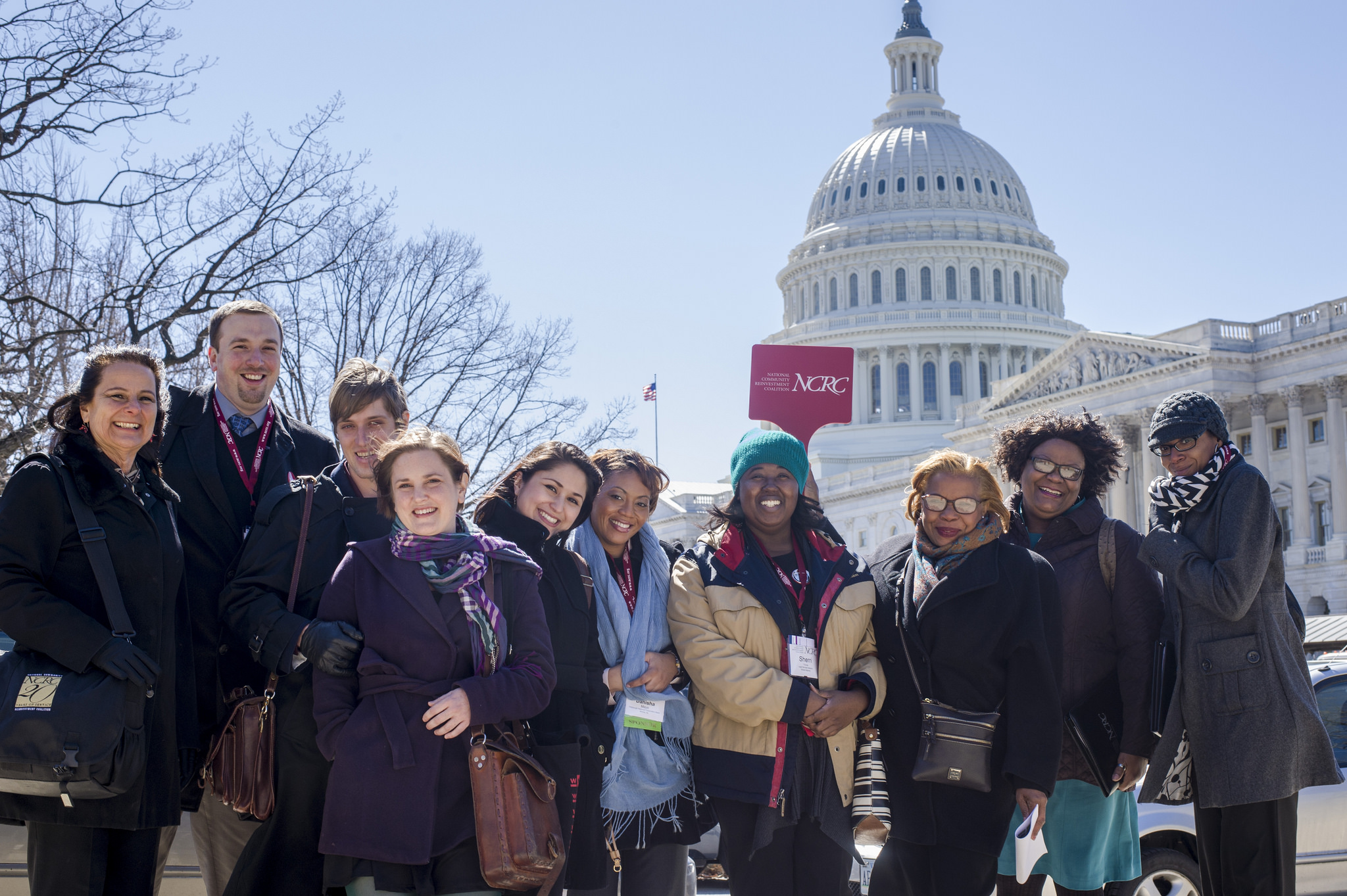 Members of the National Community Reinvestment Coalition (NCRC), including representatives of the Metropolitan Milwaukee Fair Housing Council, gather at the Capitol. (Photo courtesy of NCRC)

Bethany Sanchez, director of the Fair Lending Program at the nonprofit Metropolitan Milwaukee Fair Housing Council, asks Milwaukeeans to urge their U.S. senators and representatives to fight against weakening the reporting requirements for home lenders.

Housing is a basic human need. Yet Congress is attacking sensible, productive housing policies and programs on multiple fronts. If successful, those attacks would threaten the ability of all credit-worthy borrowers to have equal access to fairly priced credit.

Owning one’s home is considered part of the American Dream, a dream that predatory lending shattered for as many as 10 million families who lost their homes between 2006 and 2014 during the foreclosure crisis and resulting recession. In response to widespread predatory lending and other unfair practices, Congress passed the Dodd-Frank Act, which created the Consumer Financial Protection Bureau (CFPB), and updated the Home Mortgage Disclosure Act (HMDA) to require lenders to report and disclose more about their loan underwriting practices.

HMDA data shows where mortgage lending is taking place — and where it isn’t. It shows the characteristics of the people who are getting the loans, as well as who is being denied loans and for what reasons. Dodd-Frank’s additional reporting requirements include information on loan pricing; loan terms and conditions, such as prepayment penalties and adjustable rates; and additional home loan types such as reverse mortgages and home equity lines of credit.

Having access to HMDA data is critically important to tracking fair lending practices in Milwaukee and across the country.  Looking at that data shows us where there are gaps and where redlining is taking place.

Several bipartisan bills have been introduced in Congress to exempt most lenders from having to report the additional information about their home lending. There are also other efforts to repeal or delay the new HMDA requirements.

Despite banks’ claims that the new HMDA requirements would impose undue regulatory burdens, it is important to note that banks already routinely collect most of the new HMDA data for other purposes.

The National Community Reinvestment Coalition (NCRC) and the National Fair Housing Alliance (NHFA) are collaborating to lead the national effort to protect HMDA reporting requirements. In their joint letter to Congress, they summarize the concern: “The stark disparities in access to mortgage credit and the continued struggle for economic recovery in the communities hit hardest by the financial crisis call for a strengthening of our nation’s fair lending laws, specifically HMDA, not a weakening of them. Quite simply, the updated HMDA data will provide critical information about whether similarly situated borrowers and underserved communities are receiving equitable access to mortgage credit, data that we lacked a decade ago when the crisis hit. This is not the time to limit the nation’s ability to adequately assess the reasons for restricted credit access for underserved borrowers.”

The Metropolitan Milwaukee Fair Housing Council is a longtime member of both NCRC and NFHA. In Milwaukee, we have seen firsthand the devastation to our families and neighborhoods caused by segregation, racism and unscrupulous lenders whose practices flew under the radar. We echo the NCRC/NFHA letter, which concludes, “We must increase efforts to address the causes behind the increased difficulty in accessing safe, affordable credit. We urge you to oppose H.R. 2954 or any other efforts on appropriations or other bills to roll back this critical data collection and reporting.”

If you are concerned about holding lenders accountable, and ensuring that the data needed to evaluate lenders’ records is available to the public, now is the time to weigh in with Sen. Tammy Baldwin and Sen. Ron Johnson, and your congressman or congresswoman. Do not assume anything about their positions on this issue. They need to hear from you to know that you value all credit-worthy borrowers’ ability to have equal access to fairly priced credit! Please contact them today.