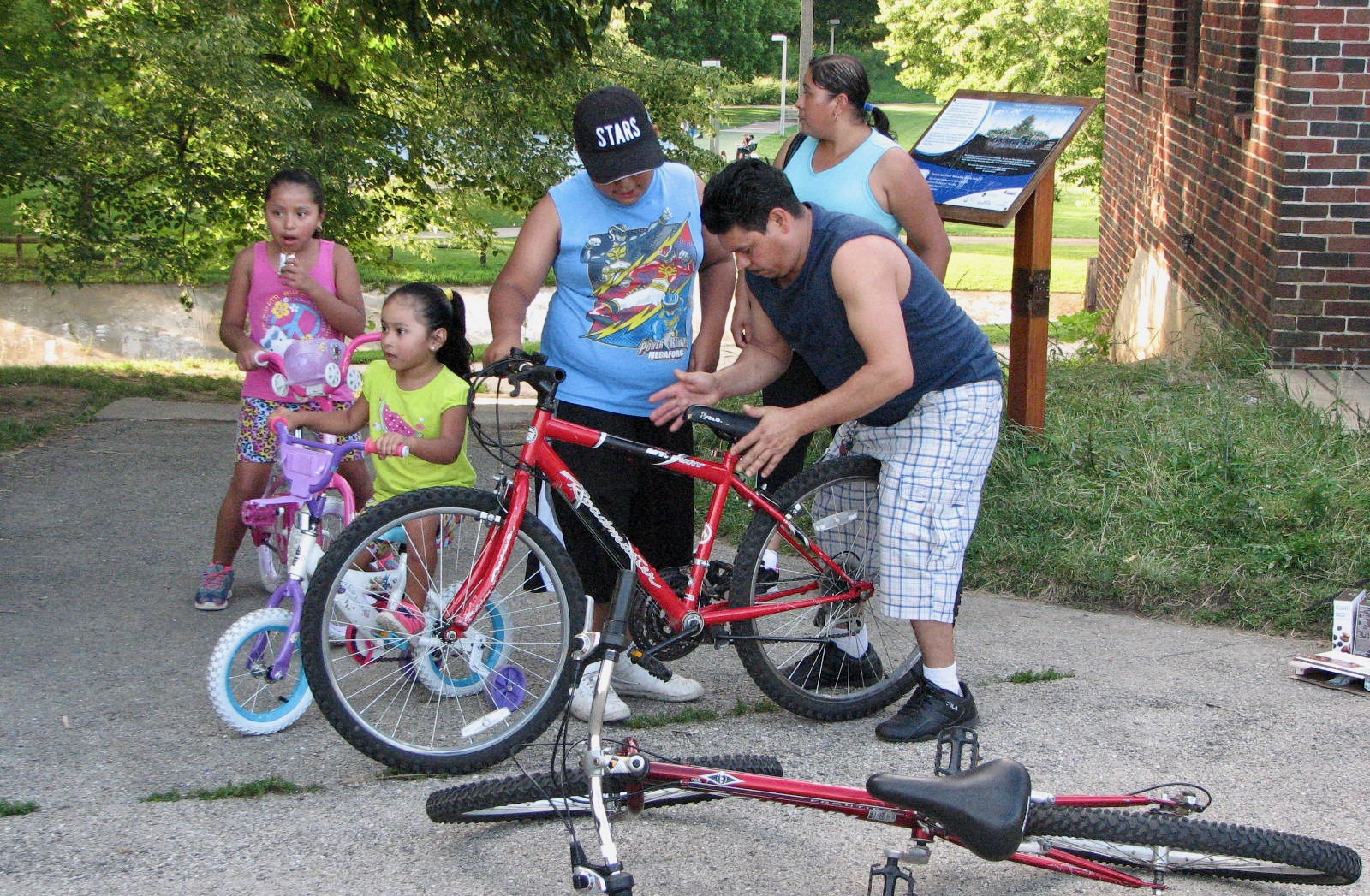 Manny Mayorga and his three children adjust their bicycles before going for a ride on the Kinnickinnic River Trail. (Photo by Lydia Slattery)

Manny Mayorga, a South Side resident, took his first bicycle ride on the Kinnickinnic River Trail about a week ago, along with his wife and three children. Mayorga and his family attended a workshop and ride sponsored by the Sixteenth Street Community Health Centers, intended to familiarize people with the trail, which is difficult to navigate. The Wisconsin Bike Fed distributed bikes to attendees.

“I didn’t know about this trail before, but now that I know it exists, I’ll try to use it,” said Mayorga in Spanish.

“People don’t know about the trail, so our job is to tell people about this wonderful space,” said Elizabeth De Leon, who led the workshop at Pulaski Park. De Leon is an environmental health educator for the Environmental Health department at Sixteenth Street Community Health Centers.

According to Tatiana Maida, Healthy Choices department manager at Sixteenth Street, community members in neighborhoods of color are often left out of the conversation in decisions that affect their communities.

The blue line shows the proposed expansion of the Kinnickinnic River Trail. (Graphic from Rails-to-Trails Conservancy)

That concern also was raised at a recent event sponsored by the Rails-to-Trails Conservancy to discuss its study, “Reconnecting Milwaukee,” which found that Milwaukee’s low-income neighborhoods lack access to biking trails, disproportionately affecting black and Latino residents.

The Rails-to-Trails Conservancy is a national organization that works to expand walking and biking trails.

The study found that 24 percent of city residents live within two miles of a trail, compared to only 8 percent of residents in low-income neighborhoods. Two miles is the maximum distance most people are willing to bike to a trail.

The study proposed connecting trails within the Kinnickinnic River Trail, as well as within the 30th Street Corridor on the North Side.

“There are plenty of access points, but the big issue the Kinnickinnic River Trail has is connectivity; it’s not a continuous trail,” said Tony Girron, events manager for the Wisconsin Bike Fed. A continuous trail would make bikers and walkers feel safer, he added.

Expanding the trails would raise the “connectivity” score for trail access citywide to 59 percent, and 66 percent in low-income neighborhoods. The score measures the ease of getting to “critical destinations,” including schools, libraries and grocery stores. The proposed improvements would increase the number of residents with access to a trail from 25,000 to 200,000, according to the conservancy. 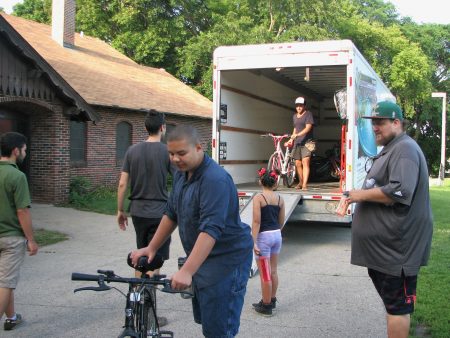 Julie Biernat, a teacher at Lincoln Avenue School, bikes the Kinnickinnic River Trail to work and back from her home in Bay View. An avid biker, she would like to see better access to the trail.

Biernat added that the Kinnickinnic River Trail could connect to the Oak Leaf Trail, which runs for 120 miles in and around Milwaukee, and connects to the Hank Aaron State Trail a 15-mile trail that stretches from the Milwaukee lakefront to West Allis along the Menomonee River.

Maida said planning for connecting trails should include community residents. “Those trails and streets will be a way to create a new culture of health that neighborhoods of color don’t have,” she noted.

Elizabeth Thorstensen, vice president of trail development at Rails-to-Trails, added, “If we make these (improvements to the trails) there could be transformational changes.”

Expanding Milwaukee’s trails is part of the Route of the Badger, a Rails-to-Trails proposal to expand Southeastern Wisconsin’s trails from 340 miles to more than 500 miles through seven counties.