You are here: Home / Home / Carousel / Uptick in deportations leads undocumented parents to make plans for children
Share this... 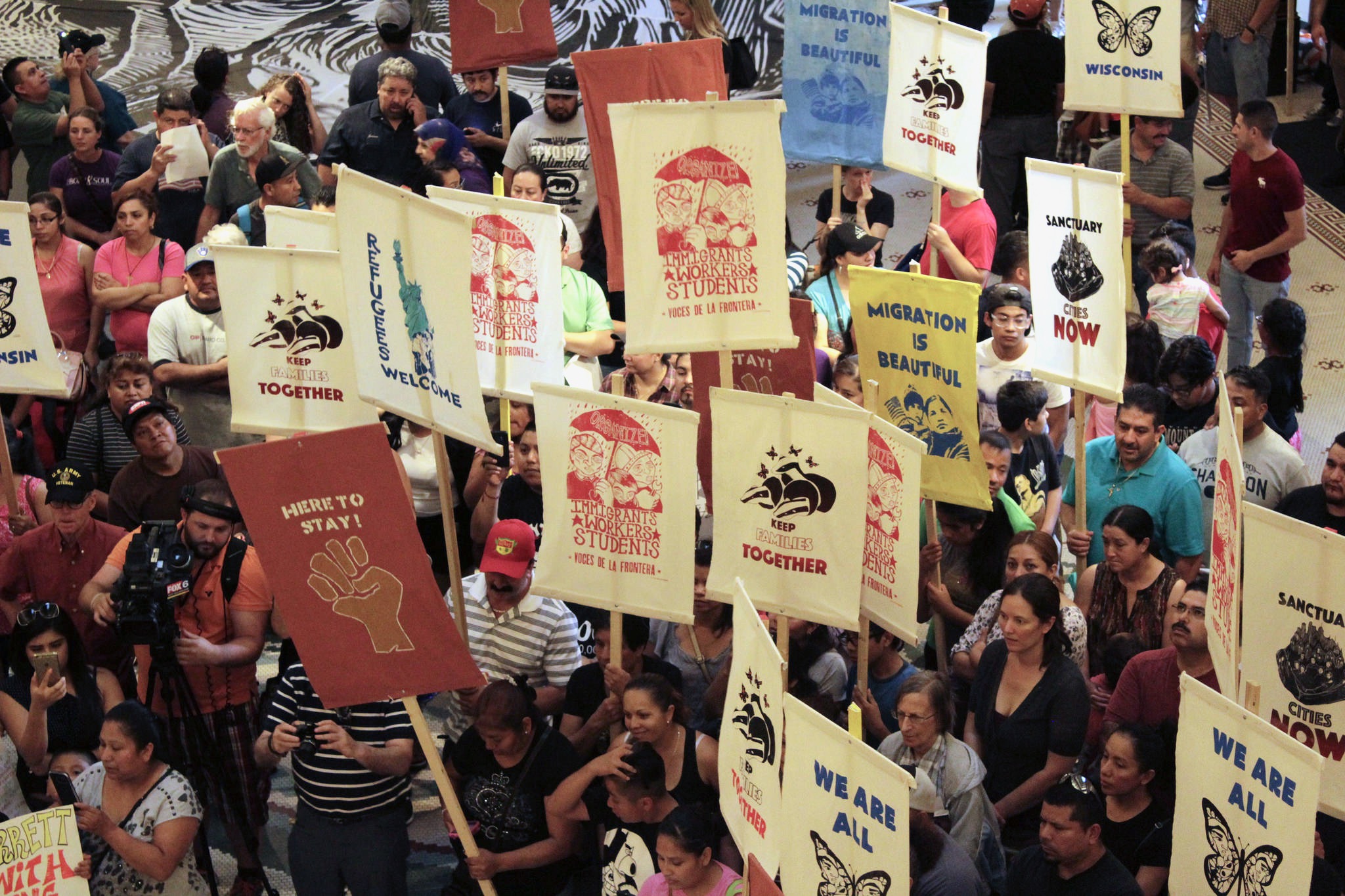 The “Lopez” family moved to Milwaukee from Mexico in 2008. As undocumented immigrants, they have always known deportation was possible. But it was not until President Trump signed executive orders to expand deportations that they took tangible steps to prepare. In early June they met with an attorney to assign a temporary guardian to care for and make decisions on behalf of their children in the event of emergency, illness or absence.

According to a report released by the Immigration and Customs Enforcement Agency (ICE) in May, immigration arrests were up 40 percent during the first 100 days of the Trump presidency.

Maria and Juan Lopez (not their real names) have signed a Power of Attorney to protect their children, who are 10 and 7, in case they are deported.

“Our children are everything to us,” said Maria Lopez. “We don’t want them to go into foster care if we get deported.” 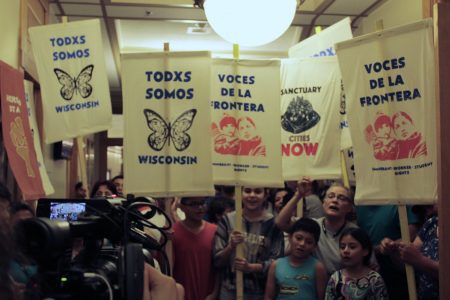 Attendees of the most recent Fire and Police Commission meeting celebrate the reversal of a city immigration policy. (Photo by Keith Schubert)

“Everyone is breathing a sigh of relief now that the City of Milwaukee is standing with immigrants,” said Neumann-Ortiz about the policy changes.

Since the start of the Trump administration, undocumented people across the state have been filling out Power of Attorney forms (POA), according to Milwaukee Mexican Consulate director Ingrid Fernández Tamez. The POA allows a family to designate a person to take responsibility for their children’s care, including getting them to and from school and taking them to doctors’ appointments.

The POA doesn’t go into effect unless both parents are deported, or if a single parent is deported. Guardians have some restrictions on their authority: they cannot permit minors to have an abortion or join the military, or put them up for adoption.

Theodore Chadwick, an immigration attorney for Grzeca Law Group, questioned why parents feel it is necessary to sign POA documents before they are detained. “People have filled out these POAs in a fit of fear, but once a person gets picked up their court date isn’t until three to four years later,” he noted. During that time, he suggested, parents can make arrangements for their children.

“Usually custody just gets transferred, officially or unofficially, to a family member,” Chadwick added. However, he stated that it is possible for child protective services to become involved, which would be the worst-case scenario.

Neumann-Ortiz defended the use of POAs. “What people are doing is what parents do, being responsible for their children — being responsible in case both parents get picked up, which we’ve seen happen,” she explained.

The consulate has been holding sessions twice a week to assist families with the POAs. The United Community Center and Marquette Volunteer Legal Clinic provide lawyers to help parents complete the forms.

Changes to local and federal immigration policies have resulted in escalated fear and immigration arrests in Milwaukee and the country. UCC president Jose A. Olivieri said that since Trump became president, undocumented people believe that any contact with police will lead to being deported. “People have been coming up to me and asking if it’s safe for them to even go to the park,” said Olivieri. “There’s a sense of fear right now that’s pretty strong in the community.”

However, he pointed out, “We haven’t seen as many of the things going on here as we do in other parts of the country where local police are much more involved in immigration enforcement.”

Of the 41,000 undocumented people arrested throughout the country in the first 100 days of the Trump administration, half have not been convicted of crimes, according to ICE.

“The biggest advice I can give undocumented people is what ICE has told us … and that is to be prepared before they get picked up,” Chadwick said.