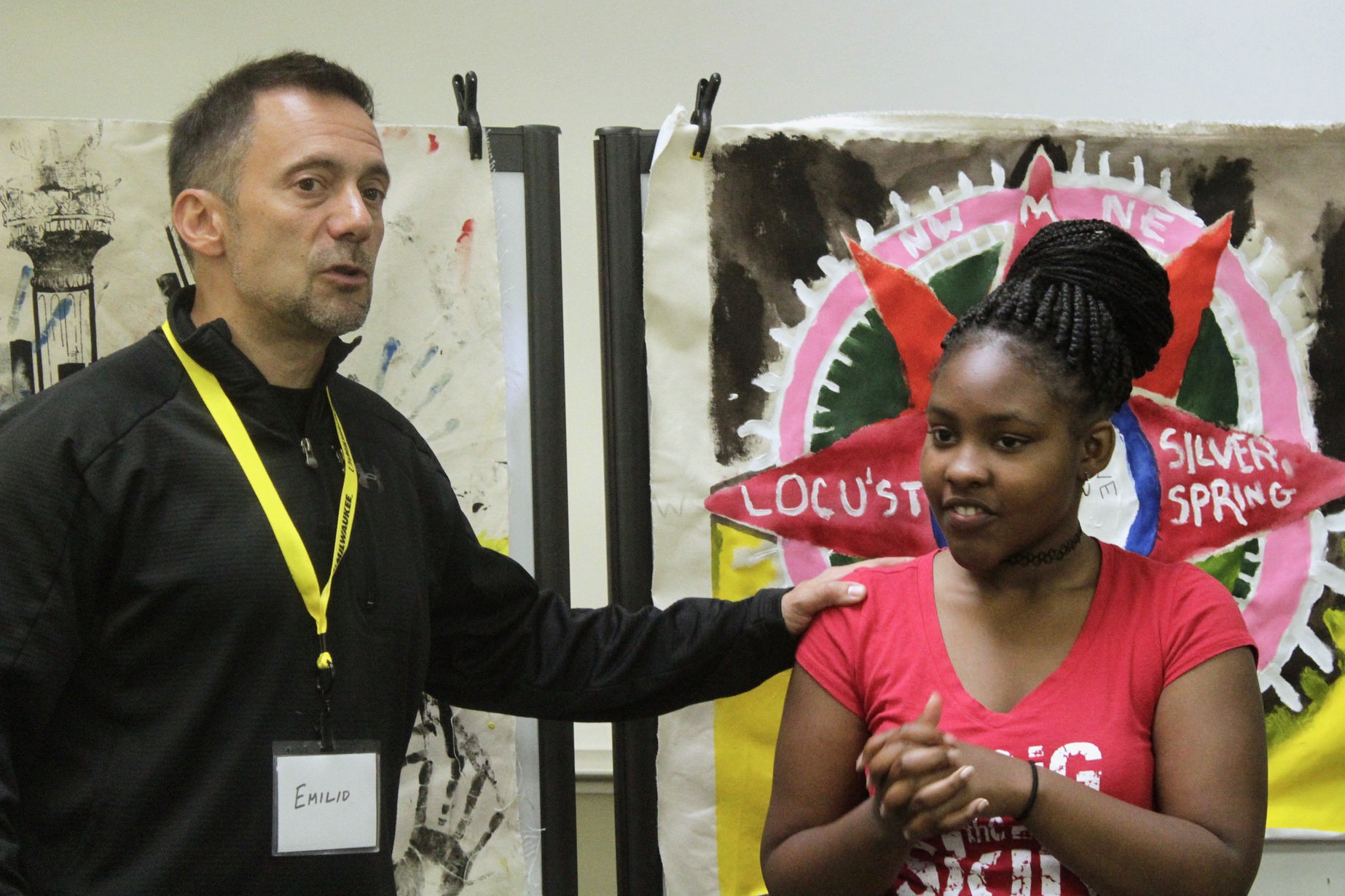 Jaylah Rayford, a sophomore at Pius XI High School, was dubious when she signed up for the first-ever Summer Justice Institute sponsored by ACLU of Wisconsin and Urban Underground.

Rayford has had a tough time growing up in an unstable household. She spends most of her time working at Culver’s, taking care of her mom and focusing on her studies. With all of those responsibilities, there is little time for her to think about her future.

“In the beginning, I thought the ACLU program was going to be real boring. I thought I wasn’t going to like it. … Now I know I can make it out of Milwaukee and follow my dreams,” said Rayford.

The two-week day camp, geared toward students from Milwaukee Public Schools and surrounding school districts, focused on civic engagement, leadership, and mental and physical health, as well as current events and social justice issues. The camp ran from July 24 to Aug. 4.

“We wanted to have programming that’s almost on a collegiate level, while sharing information that students aren’t getting in high school,” said Emilio De Torre, director of community engagement for the ACLU. 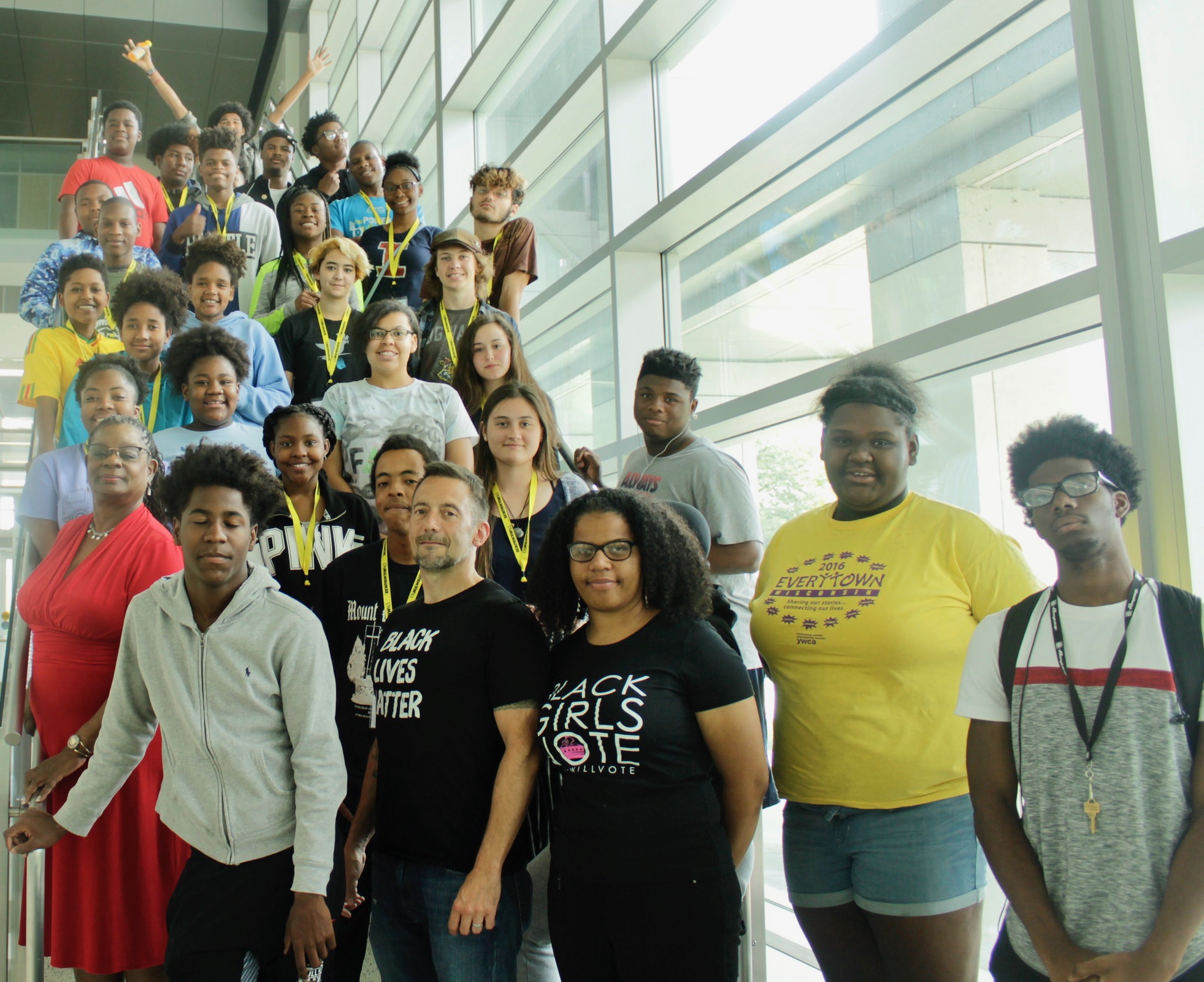 The ACLU and Urban Underground have been a close team for more than 12 years, facilitating workshops for young people, said De Torre. “We were a likely partner from the beginning because of the work that we do. So it was a beautiful match,” added Sharlen Moore, co-founder and director of Urban Underground.

When brainstorming programming for the institute, the organizers knew it was important to introduce the young people — the majority of whom are black or brown — to a diverse group of speakers and also to make sure there was a high level of fun and engagement, Moore said.

“Based on what’s going on right now in our community and society, it was critical that we talked about topics that were impacting young people of color,” said Moore.

The students participated in a broad spectrum of workshops. Activities included everything from martial arts classes to yoga, and guest presenters from Congresswoman Gwen Moore to local college professors. The group also took a civil rights bus tour that followed the path the NAACP Youth Council took in 1967 during the fair housing marches.

The guest speakers were a big deal for a lot of the young people. “They got access to people they would usually never get a hold of in this intimate of an environment,” said Jarrett English, youth organizer at the ACLU.

“We came up with a rock-star list of speakers who really believe in these young people,” he added.

After listening to the speakers about growing up poor in Milwaukee and facing challenges on par with her own, Rayford said she is now much more confident about pursuing her dream of traveling the world as an adult. During her time at the institute she wrote letters to several international embassies inquiring about opportunities to study abroad.

“The hunger and talent of these young people is incredible,” said De Torre. “I’m sitting here on my lunch break editing letters to embassies. Who would have thought?” 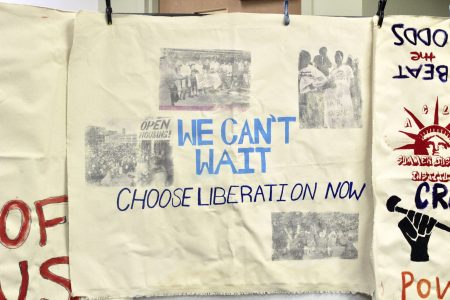 Students designed a flag at the Summer Justice Institute during an arts and crafts workshop. (Photo by Keith Schubert)

Alemitu Caldart, an incoming freshman at Shorewood High School, said she enjoyed the broad diversity of speakers. “I think that listening to each one of their stories and hearing their perspectives was one of the coolest parts of the camp.”

She is excited to incorporate what she learned at the camp into her everyday life. “I’m going to bring these social justice topics up more with my family, my friends and at school to make sure they understand them as well.”

The ACLU also runs a much larger program called the Youth Social Justice Forum at UWM where 400-500 students participate annually. “What we saw from the forum is that they’re always hungry for more,” noted English.

The level of engagement was much more intense at the institute compared to the forum, he said. “If the forum is a bachelor’s level course, then the institute is a master’s course.”

Nicholas Smith, an incoming freshman at Rufus King, said the institute taught practical information. “We learned about police brutality and how to prepare yourself in case a police officer questions you. They taught us if they search your bag you’re supposed to say ‘I do not consent to this search of my property.’”

Caldart noted police brutality isn’t easy to talk about. “I have read comments from people in which they believe police brutality doesn’t exist, and that’s why I was very happy that we talked about it,” she said.

De Torre said the students were taught to always be polite when interacting with the police. They were told that if they feel they were treated unfairly, they should file a complaint. “The time to debate with police is in court, not on the street, otherwise you could get physically hurt,” he said.

English commented that young people need to be engaged early. “The well-being of our nation literally depends on these young people understanding why social justice and all of these fights for equal rights are so important.”