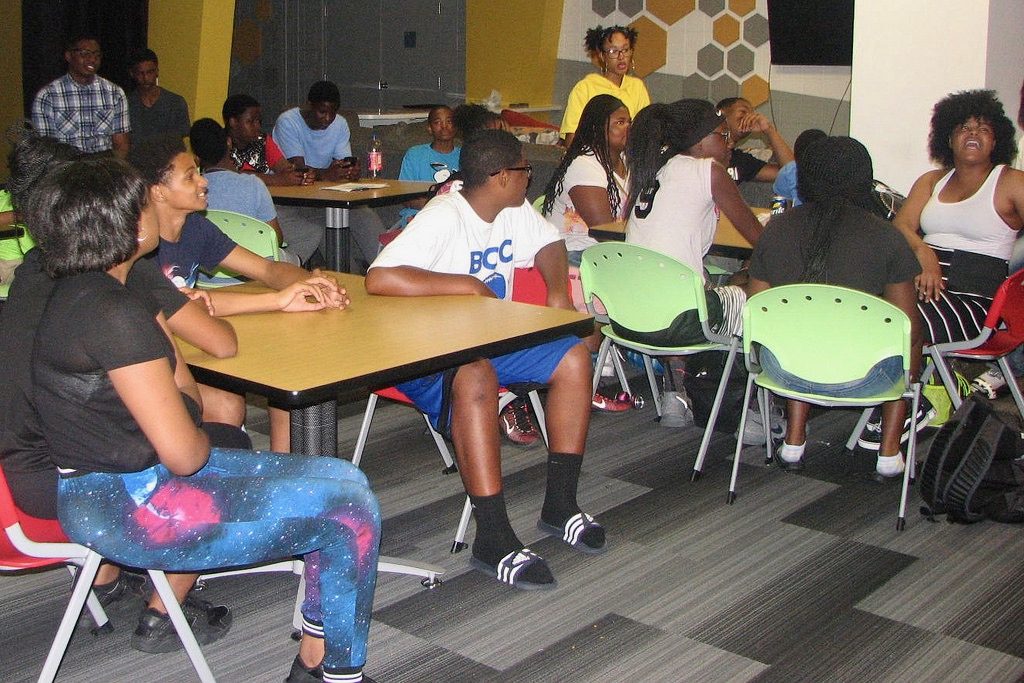 “I think it’s a family,” said Morris, who works with younger children at the club. “Everybody just comes together and that’s how we become a family.”

On a recent afternoon Morris and more than 30 other teenagers were gathered in the club’s new teen center to write and later perform their own raps under the guidance of Donte Daughtry, teen coordinator at the club.

The teen center provides space for young people to socialize and participate in age-specific programming. It includes a new computer lab with a half-dozen computers; a theater performance area with a large screen, stage and projector; a game area with video games, pingpong table, pool table and foosball; and a quiet spot to study.

The brightly decorated 3,130-square-foot teen center was created in response to the Sherman Park unrest a year ago. The club previously provided a much smaller area for teens. 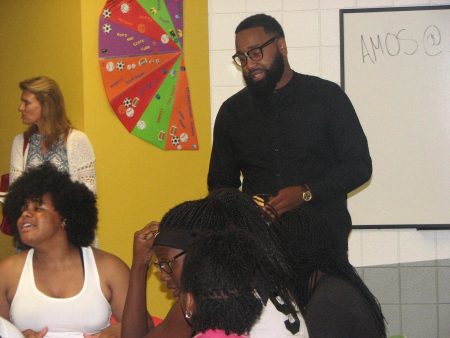 “I’m so jealous that this wasn’t here when I was coming to the (Mary Ryan) Boys & Girls Club,” said Daughtry, who lives in Sherman Park and attended the club throughout his childhood. “But I’m grateful the kids get to experience this new space.”

HGA, an architecture, engineering and planning firm, donated the design for the center based on input from the club’s teens, said Rebecca Ehlers, senior director of marketing and communications for the Greater Milwaukee Boys & Girls Clubs. The largest youth-serving agency in Milwaukee, the organizations serves 43,000 youth annually.

“The great news is they (HGA) really listened and the kids are thrilled [with] the end product,” Ehlers said.

The center officially opened in June for the beginning of summer programming and serves approximately 50 teens per day during the summer. The Mary Ryan Boys & Girls Club reopened in February after it was closed to the public for significant renovations at the end of August 2016.

“I think it (the new teen center) is super dope,” said Charlysse Baker, a member of the Mary Ryan Boys & Girls Club who provided input to HGA during the design process.  Baker, a youth worker at the club who has been a member for nine years, helps out by serving lunch or supervising children.

“This is an investment in the community that these kids don’t always see,” said Vincent Lyles, president and CEO of the Greater Milwaukee Boys & Girls Clubs. “We’ve not only stayed, but we’ve also improved.”

Lyles added that the new space shows that families and children can rely on the Boys & Girls Clubs. “We’re welcoming you to come in and check it out.”