You are here: Home / Home / Carousel / Retired organizer reflects on career of ‘stitching’ people together
Share this... 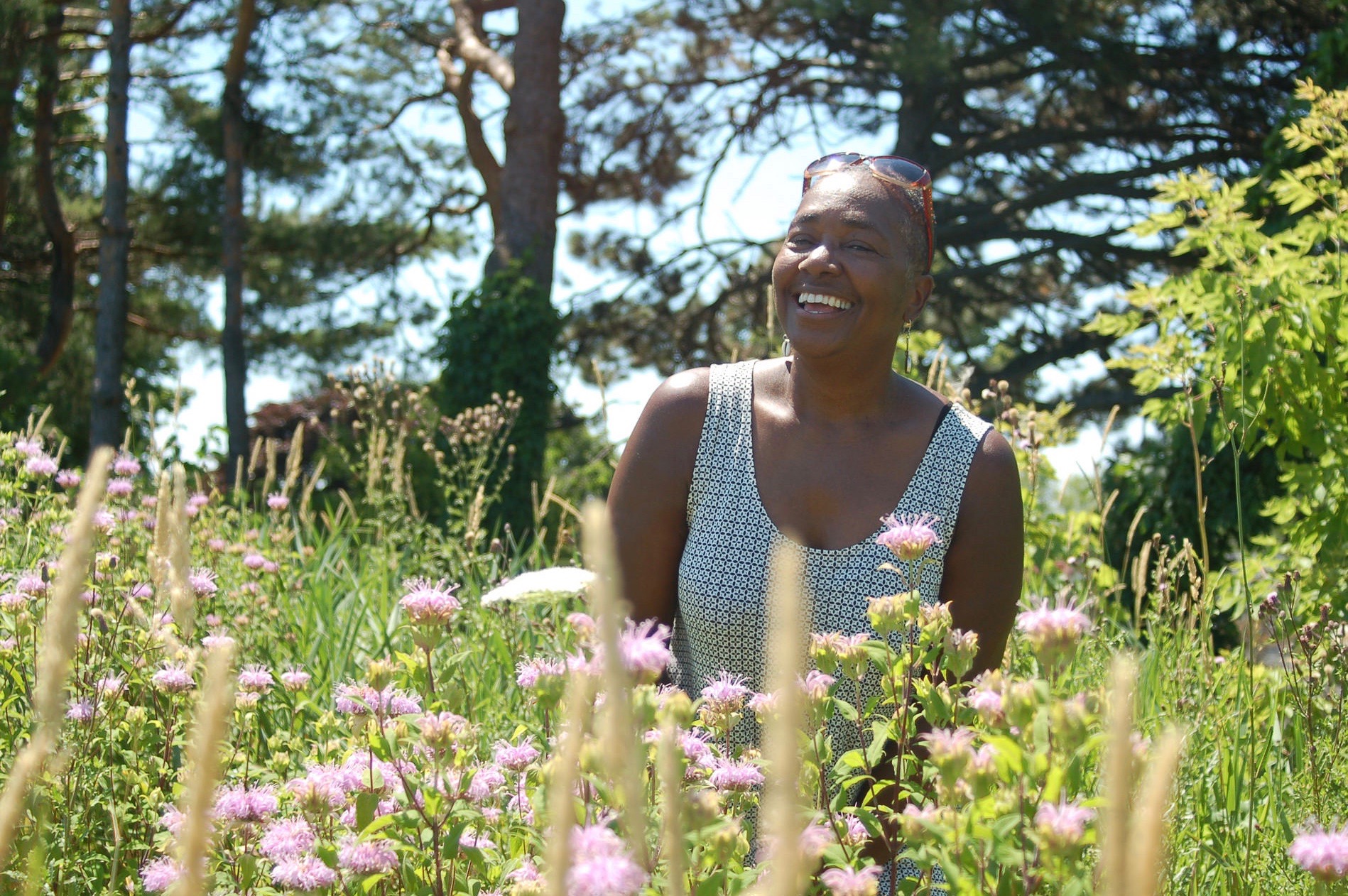 As Talibah Mateen-Hooper walked from the hilltop in Kilbourn Reservoir Park down toward its northern border on Meinecke Street, she spied a gaggle of children playing. Recognizing her, they ran squealing, calling out and throwing themselves at her with hugs. Like a fairy godmother, she conjured up bottles of bubbles, perfect for a summer afternoon.

“I always carry bubbles in my car and whenever I see a young lady with kids, struggling, I stop and ask her if I can give bubbles to the kids,” Mateen-Hooper said. Once she has done that, she engages their mother in conversation. “Wherever I meet people, I always engage them,” she said, adding, “People want to be part of things.”

Better known as Mateen, she retired at the beginning of this year after almost 20 years as a community organizer at SDC and Safe & Sound. Known for her warmth, outgoing personality and skill as an organizer, she is missed at Safe & Sound, according to two former colleagues. But at 64, she welcomes the opportunity to spend time with her grandchildren, care for her elderly mother and uncle and “do me,” she reports.

Safe & Sound colleague Adrian Spencer compared Mateen to a butterfly. Shadowing Mateen in her first year as an organizer, Spencer said she enjoyed watching her “work a room.” Working citywide, Mateen would introduce people wherever they went. “She would float around like a butterfly, smiling and greeting everyone and having these little quirky conversations and then pass them off … to me,” Spencer said. 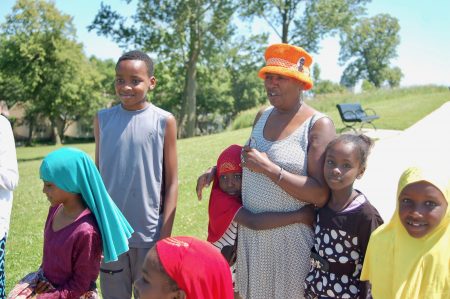 Mateen-Hooper runs into some children she knows playing in the park. (Photo by Andrea Waxman)

Citing Andre Lee Ellis, the founder of the We Got This youth employment and mentoring program in Borchert Field, and Brenda Hart Richardson, a resident leader in Amani, Mateen said she met many wonderful people in the neighborhoods working on a grassroots level.

Richardson also engages neighborhood residents and introduces them to each other, said Mateen. That’s important “because when people feel that they’re by themselves, it’s easy for them to be afraid. But if people know others who’re going to stand with them, they feel that everything’s going to be all right.”

Her close friend and neighbor, Betty Glosson, said Mateen “never meets a stranger. She’ll walk up to anyone, especially if there’s something she can help them with.” She has a real passion for young people and talks to them wherever she meets them, Glosson added.

“They’ll walk by with their heads down but before they get too far, (Mateen will) have their heads popped up and they’ll be laughing because she’s just that kind of person,” Glosson said.

Mateen “adopted” a family in Africa many years ago and supported their children’s school expenses, according to Glosson. One of the daughters continued her education through college and though they have never met, she remains in contact with Mateen.

“She does the same thing here in Milwaukee. If she sees someone and they have a need, she’s willing to go in her pocket. She doesn’t hesitate at all,” Glosson said.

Mateen’s kindness and genuine friendship have touched Melvin Lawrence, a friend of 40 years, on several occasions, especially when he suffered tragedies and losses, he said.

After the deaths of his 25-year-old daughter at the hands of her boyfriend in 1994 and recently, with the passing of his mother, Mateen supported him with all kinds of help, including a monetary donation, which he said “really lifted up (his) spirits.”

Like Spencer, Damien Smith, Safe & Sound’s District 5 youth organizer, received a warm welcome, and a lot of guidance and encouragement from Mateen when he joined the staff three years ago.

As an example of Mateen’s work, Smith described a program she created to deter at-risk youth from getting involved in illegal activities.

Over a period of weeks, the program takes young people through the points of contact a person charged with a crime has with the criminal justice system, Smith said. First, the youth meet with police for a dialog that includes “genuine conversation,” according to Smith. Next, they talk with incarcerated individuals, as “a cautionary tale.” Then public defenders tell them about the trial process and they visit courtrooms, Smith explained. Finally, the youth speak with people who have overcome the challenges of criminal activity and incarceration.

Looking back over what she’s learned through her career, Mateen said, “The most important thing is that you’ve got to spend time with the young people.

“Sometimes it breaks your heart the things they tell you,” she said, noting that most would blossom in a less harsh environment. “We’ve got to do better by our kids,” by setting good examples and not approaching them with criticism but rather with love.

Glosson has lived across the street from Mateen near 25th and Vliet for 30 years and sees her every day. The two met in the 1980s when Mateen worked as a waitress at the Interlude, 3937 W. Vliet St., where Glosson was part owner. Later, they moved onto the same block.

An organizer since the 1960s, Glosson has mentored Mateen and the two have worked on many community projects together.

“I think if you have information you should pass it on. I have a lot of experience in organizing and I share it with (Mateen) and she takes it and runs with it and makes it her own,” said Glosson.

Improving the quality of life in communities has always been important to Mateen. Even when she worked as a property manager, before becoming an organizer, she was drawn to helping people, giving out resource information and creating programs for residents, she said.

Born in Chicago, Mateen moved with her parents and siblings to Milwaukee when she was 10. The second oldest of eight children, she said her parents were able to buy a house and build a good life here. A wife, mother of two adult sons and grandmother of five, Mateen is caring for her 88-year-old mother and 89-year-old uncle, both in varying stages of dementia.

A lover of tropical places including Hawaii, Belize, Jamaica and Puerto Rico, all of which she has visited, Mateen hopes to go to Africa, Costa Rica and Bora Bora someday. Until then, she enjoys swimming almost daily and spending time with her grandchildren who live here.

“I always wanted to live in another country,” she said, “but due to babies, due to parents, due to uncles, I haven’t had an opportunity to do that.”