You are here: Home / Home / Carousel / Special Report: Housing First drastically reduces number of homeless, but many fall through the cracks
Share this... 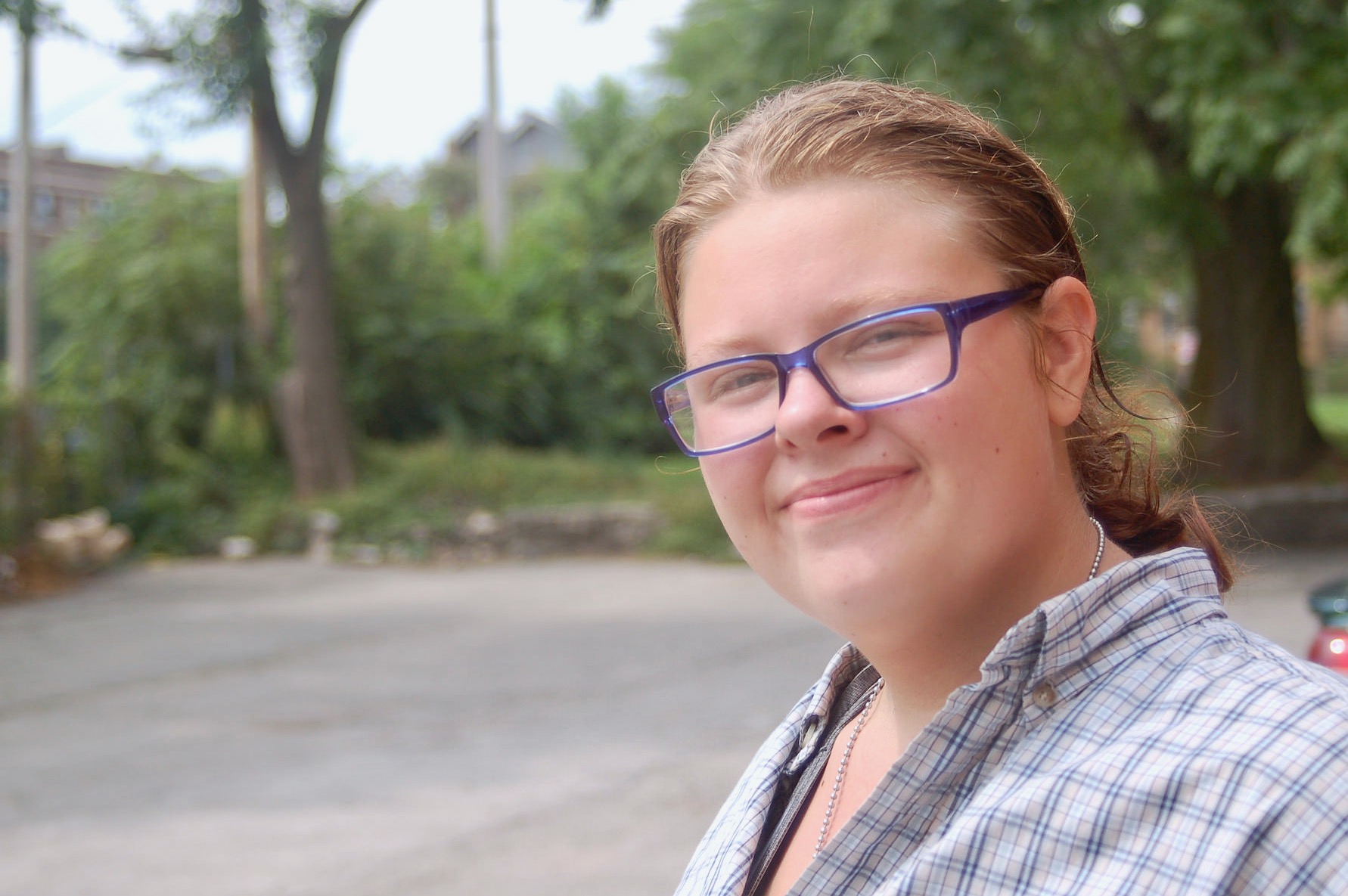 Life for Shauna Kucharczyk, 18, has been marked by tragedy. Each night she sleeps beneath a bridge, in a red, white and blue tent, as semis and other vehicles rumble overhead on the Marquette interchange. Shortly after Kucharczyk arrived in Milwaukee from Nevada in hopes of building a relationship with her father, he was murdered. It was the day after her 16th birthday. Most of her life, she said, has been spent moving from place to place with her mother, brother and sister, until she became homeless earlier this year.

Despite an early life filled with hardships, Kucharczyk, who wears purple-rimmed glasses, has brown hair and a wide smile, has reason to be hopeful that she will find the stability that has eluded her during her first 18 years.

A few weeks ago she received a housing voucher good for a security deposit and three months’ rent as part of Milwaukee County’s Housing First initiative, launched in 2015. The initiative has decreased the number of homeless individuals in Milwaukee 40 percent, from 1,521 in 2015, to 900 this year,  according to James Mathy, administrator of the Housing Division for Milwaukee County.

While the “housing first” approach to homeless assistance, which prioritizes finding permanent housing and then providing wraparound support, has been utilized in other parts of the country, in Milwaukee the model has been taken one step further through the use of housing vouchers, according to Mathy. Working with government and nonprofit partners, the county has leveraged the  Section 8 housing program, which provides a rental voucher to use with private landlords, as well as other rental assistance programs, while also changing the housing application process to give preference to homeless individuals. Partners include the City of Milwaukee, the Housing Authority of the City of Milwaukee and nonprofits including Guest House and Community Advocates.

“Our community has really moved the needle in terms of the number of homeless individuals. We’ve probably had the biggest percentage drop in the nation,” Mathy said.

Since 2007, when the county first began keeping a headcount of the homeless, the total never fluctuated by more than 90 and had always been more than 1,400, according to Luke Rosynek, housing program evaluator for the county’s Housing Division. The problem with the old approach to housing the homeless was that it necessitated adherence to strict rules, such as sobriety and mandatory attendance at counseling and other services, he said.

“They might have an appointment at a certain time, but maybe they got robbed last night,” so they didn’t show up, Rosynek said. Limited transportation was also a major obstacle, he added. As a result, individuals were remaining homeless for many years.

“The old way was to put people through a lot of rigors to prove that you were housing-ready or worthy,” Rosynek noted.

An important aspect of the housing first model is to stabilize an individual’s housing situation and then provide wraparound case management services to help participants address substance abuse, mental health or other issues. The approach is also a cost-saving measure. According to Rosynek, leaving individuals on the streets costs the community between $30,000 and $50,000, due to their high rate of arrest or incarceration, emergency room visits and commitments through the county Behavioral Health Division.

Housing options for the homeless vary depending on their situation, though most are eligible for tenant-based vouchers, a form of rental assistance. 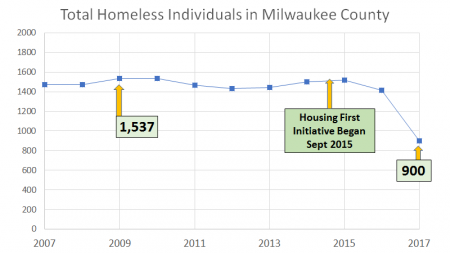 The voucher Kucharczyk received is geared toward individuals capable of working, and only covers the first three months’ rent, with the individual taking over the lease or rent payment afterwards. Kucharczyk said she had been employed at the Klement’s Sausage Co. Inc., 207 E. Lincoln Ave., but couldn’t manage working while being homeless.

Another type of housing voucher is available to people who qualify as part of the “Chronic Initiative.” Chronically homeless participants pay up to 30 percent of the rent after the third month. The remainder is covered permanently through county funds.

The Chronic Initiative has served more than 200 individuals deemed to be most in danger or vulnerable on the streets. Participants have the option to live anywhere in the county, including the suburbs, Rosynek said.

Robert Itzin, 54, was among the first individuals housed through the Chronic Initiative. Itzin, who has a master’s degree and once worked as a journalist, said that after his divorce, he developed a drug problem and ended up homeless, moving from shelter to shelter. He credits the program with helping him piece his life back together.

“I was at my wit’s end and suicidal before I found out about the program. My addiction is still a challenge but it’s more under control than ever before,” said Itzin, who lives in Riverwest.

Though he’s on disability and not working, Itzin keeps busy volunteering at meal kitchens and other organizations that serve the homeless. He also began writing again, and is helping to put together a quarterly magazine for the county about homelessness in Milwaukee. The first issue will be distributed next month. 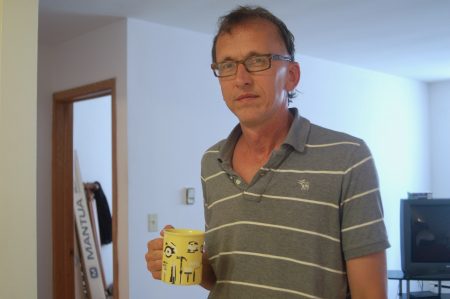 Robert Itzin, 54, is currently working on a magazine about homelessness in Milwaukee. (Photo by Edgar Mendez)

“Despite my journey and my own bottoming-out situation, I have a voice again and want to be part of the solution. One of the tools I have is this magazine,” Itzin said.

According to Rosynek, the housing retention rate for the first 200 participants in the Chronic Initiative is 97 percent. Data compiled by Rosynek through Wisconsin Circuit Court Access shows that the first 150 participants received municipal citations 210 times in 2015, but only 39 times in 2016. The Housing First initative began in September 2015.

“All the people’s problems don’t just go away, but the stability of housing helps them move forward,” Rosynek said.

Itzin chose to seek counseling and addiction services on his own, as do other Housing First participants. However many participants choose not to take advantage of case management services, according Rosynek. Still, case managers are required to meet with clients and encourage them to seek services.

“They come knock on your door and ask you what you need. It might be soap that you get them. As they get more comfortable and trust you, then sometimes you can address other issues,” Rosynek said.

Kucharczyk is still on the streets and unable to find a landlord who will rent to her and her boyfriend, Josh Paisley, 30, who’s also homeless. Neither is working nor has a rental history, a problem for landlords, they said. They begin most days volunteering at Redeemer Lutheran Church’s meal program, and spend the remainder of the day searching for apartments by foot and hanging out at the library, before returning to their tent. Kucharczyk, who’s been diagnosed with a mental illness, said being homeless has prevented her from having access to the medications she needs.

Kucharcyzk and Paisely are examples of how easy it is to slip through the cracks, even with a voucher in hand, said David Nelson, co-founder of StreetLife Ministries, and associate professor of family and community medicine at Medical College of Wisconsin. Nelson and his street outreach team have interacted with Kucharczyk, and said her story is common in Milwaukee. StreetLife Ministries, a nonprofit run by volunteers, provided the tent Kucharczyk and Paisley share with another couple. The other couple, who also have a housing voucher and are unemployed, have not been able to find an apartment either. 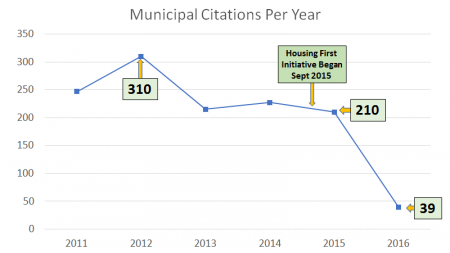 “For people that live on the margins everything in life is harder to do. Finding employment is harder, caring for children is harder, going places is harder. Even with some resources, finding an apartment is harder, ” Nelson said.

Nelson recalled helping a man by setting up an appointment with county officials to discuss housing options. He never showed, Nelson said. “It turns out, the guy was in the hospital. This is how people fall through safety nets.”

According to Nelson, part of the problem is a shortage of case managers and outreach workers. Voucher holders have access to housing navigators, community intervention specialists and case managers. But if they don’t seek out these services, there’s not much to be done, said Rosynek. The result is that they remain homeless.

Funding to maintain services or provide more in the future is also a concern, said Mathy. The county spends about $1.5 million a year on Housing First Milwaukee, with the city of Milwaukee kicking in another $600,000 toward rental assistance. The county is seeking philanthropic, private and other partners to help support the initiative.

As for Kucharczyk, she has set a long-term goal to live in a studio apartment in a safe area of town with her boyfriend, and to get back to work at Klement’s. Her short-term goal is simpler. 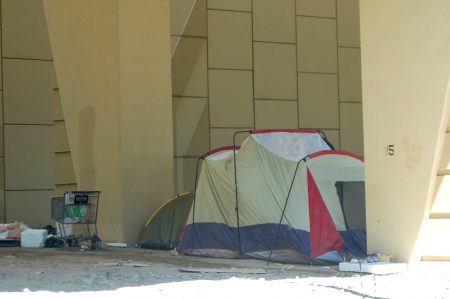 “I’d just like a nice long hot shower. I’d feel so much better if I could have that every day,” she said.

Kucharczyk has to move soon, she said. She has been told that the homeless encampment underneath the Marquette Interchange will become a parking lot. According to Michael Pyritz, Wisconsin Department of Transportation (DOT) southeast region communications manager, there is some overlay work going on above the bridge. However, he added that people are not allowed to live under the bridge because of safety concerns.

Pyritz said that DOT, the county and city have a process to identify and provide outreach to homeless individuals living under bridges. According to an aide to Alderman Robert J. Bauman, who represents the area, nearby residents also recently requested that police work on moving homeless individuals out from underneath the bridge.

Thankfully, Kucharcyzk said, she just found a new job and a landlord who will consider renting to her and Paisley if she can provide proof of employment.

“I’m really hoping someone gives us a chance to move in. I just wish my life was easier,”  said Kucharczyk, with a sigh.