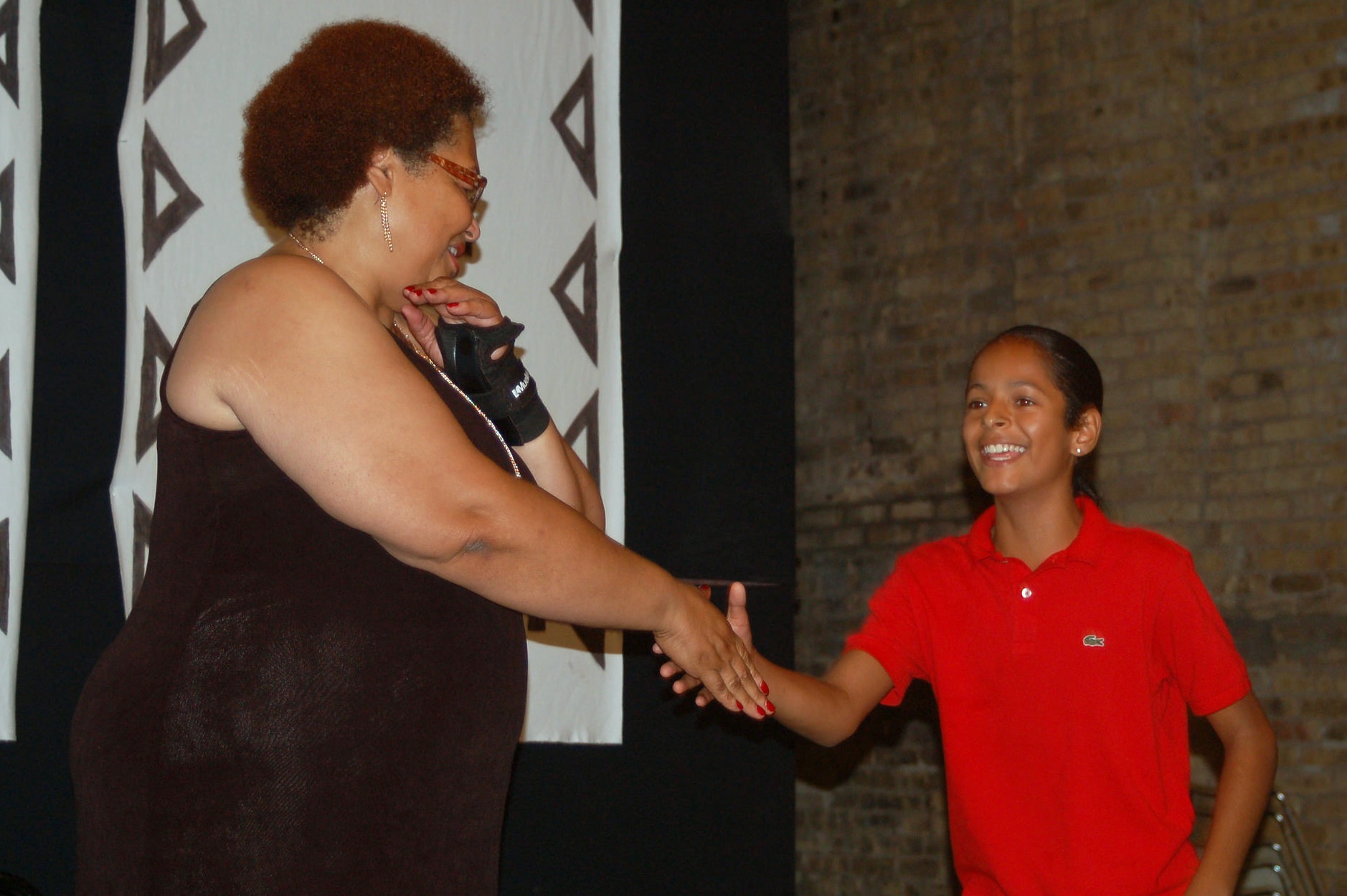 Angela Pruitt congratulates Ismael Moreno as he ascends the stage to receive his certificate of completion and summer stipend. (Photo by Andrea Waxman)

Learning how to garden, prune plants and make compost were Ismael Moreno’s favorite things about his first summer job. The 13-year-old also liked seeing the impact of his work on his community, which he described as “less garbage and neater gardens.”

Moreno was one of 13 young people employed in the new Metcalfe Park/Walnut Hill summer job program, the Young Cats (Community Action Team) for youth ages 10 to 13. Participants worked in community gardens and performed neighborhood cleanups 16 hours a week for eight weeks. They were paid a stipend for their work.

In addition to learning about their communities, acquiring gardening skills and building work experience, the young people were joined one day a week by Medical College of Wisconsin students who shared their knowledge about education, health, diet and life experience.

Moreno “learned how to be much more responsible” about things like being on time and listening to his supervisor, said his father, Ali Quinn.

”Having somewhere to go, somewhere to be, something to do at a certain time and for a certain duration” brought a change in his son’s attitude, Quinn added. “He’s more willing to help.”

Walnut Hill resident Angela Pruitt, a mother of adult children and 12 grandchildren, founding member of the Metcalfe Park Community Action Team (MPCATS) and volunteer with Washington Park Partners, is the inspiration behind the program. Pruitt said she saw ways the youth could help the community, earn some money and learn about themselves, each other, and organizations and resources in the community during their summer break from school.

Her main priority, though, was to foster a work ethic, “a better appreciation of what a job holds for them” and an understanding that the rules for operating in the work world are different from those in academic and social life. 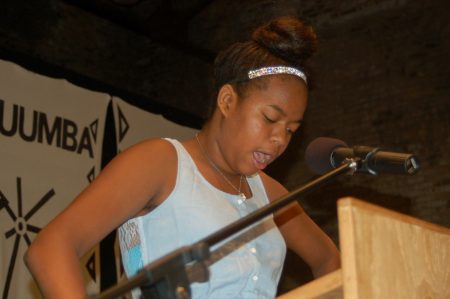 Charlisia Williams speaks to Young Cats participants, parents and volunteers at a dinner marking the end of the program. (Photo by Andrea Waxman)

“As a teenager coming from a poor family, the summer jobs were always an opportunity for me to be able to prepare myself for school,” and later, for working, Pruitt said.

According to Danell Cross, coordinator of Metcalfe Park Community Bridges, formerly MPCATS, “Because our communities are really struggling, these young people really want to work and they want to get paid. They want to be able to help out (by buying) their own school clothes.”

Young Cats supports their ability to contribute to their own needs with dignity, Cross said. Rather than standing in line to get a book bag they “get to go to the store and purchase it with the money that (they) worked for.”

She noted that she and Pruitt chose to offer the program to 10- to 13-year-olds because there are few opportunities for them to work and get paid. To participate in Mayor Tom Barrett’s Earn & Learn Summer Youth Employment program, applicants must be at least 14.

Cross and Pruitt also designed the program to bring Metcalfe Park and Walnut Hill youth together and build bonds between the neighborhoods.

“It’s a city that we’re trying to keep safe and … we all have to learn to work together,” Pruitt said.

The program was funded by grants from the Greater Milwaukee Foundation’s Reasons for Hope MKE Fund and Zilber Family Foundation. Northwestern Mutual Foundation provided funds for social activities, including a field trip to the Helium Trampoline & Climbing Park in New Berlin.

There was not enough funding to pay Pruitt, who ran the program, but she said “being with the kids all summer and watching them learn and then watching the community accept them” was payment enough.

“Sometimes when we would walk the streets, people would stop their cars and say ‘Who are you?’ We would yell out ‘MPCATS Community Action Team’ and some would ask, ‘How can my kid get involved in this?’” Pruitt said.

Dorothy Woods, whose three granddaughters participated as Young Cats, said they were excited to go to work every day. One day they brought home some green tomatoes and cooked them. They were so proud that they had grown the tomatoes, she said.

“It was happy and it was growth in them.  … It was just beautiful,” Woods said at a recent celebratory dinner at the Wisconsin Black Historical Society, 2620 W. Center St.

India Graves, one of Woods’ granddaughters, said the program was fun. “We learned a lot of stuff, … met new people and … had an awesome time.” She said being paid motivated her and her cousins at first but after they got involved it became less important as a reason for participating.

“The best part was coming together with other people that I’ve never met, with a different community,” said India’s cousin Charlisia Williams, who was selected to speak at the closing dinner because of the leadership she demonstrated.

One of the benefits Makhi Taylor pointed to was getting out of the environment that he is used to, finding friends and talking to more people, he said. Otherwise, “I would have been totally antisocial,” he said, smiling. Taylor, who is entering eighth grade, plans to apply for a work permit and seek a part-time job selling clothing this fall, he added.

His twin sister, Makayla, liked the program because she was helping Milwaukee by cleaning up Walnut Hill, where she lives, and nearby Metcalfe Park. “We were getting some of the kids to join our team and they weren’t bored this summer,” she said.

Their mother, Dawn Pruitt, Angela Pruitt’s daughter, noted that her mother has been working in the community for “as long as I can remember, and she’s very good (at) … helping the young people build up their self esteem and take pride in themselves and their community and their culture.”

The program also provided participants with money to buy school supplies, “which is a very good thing for them, she said, adding, “I feel like they have grown more mature from this opportunity.”