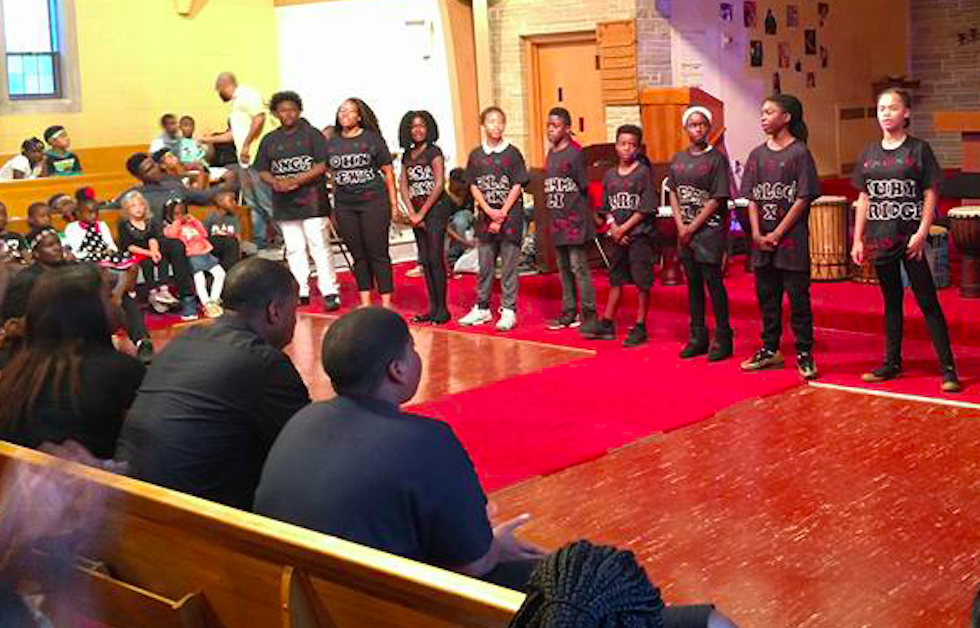 Margaret Rozga, poet, civil rights activist and professor emerita of English at UW-Waukesha, writes about a summer camp that exemplifies the “beloved community” of the civil rights movement.

They’re called scholars — the children and teens who participate in Camp Umoja, a six-week summer day camp program held at both the Harambee and the Havenwoods campus of All People’s Church. This suggests that the program has goals beyond summer recreation, and it does. As a guest presenter one morning at each campus, what I found particularly inspiring is the way the Camp Umoja program picks up and re-creates for today’s youth the best practices and spirit of the Freedom Schools of the 1964 Mississippi Freedom Summer project. It became clear to me once again that if we know this history, the civil rights movement is a gift that keeps on giving.

Using active learning and arts-based techniques, Camp Umoja teaches the African-American history that schools generally skip and instills a vision of a future of equality with a sense of agency as creators of that future. On the mornings of my presentations, I saw a well-paced daily camp program that wove the more scholarly in with the more practical. Most activities involved the scholars as participants. They are encouraged to ask and respond to questions.

My presentation focused on civil rights history, in particular on the open housing marches in Milwaukee. To get the scholars involved, I read a poem from 200 Nights and One Day, my book about the marches, and pointed to the audience as their cue to chime in with the poem’s repeat line, “people on the march.”

When I asked them what civil rights leaders they could name, they named some I expected: Martin Luther King and Rose Parks, for example, but they also named Ruby Bridges. I was impressed that they knew of this little girl who walked bravely to the New Orleans public school she was about to integrate.

Also speaking that same morning at the Harambee campus was Jeffrey Pitman, a lawyer whose story about his career choice and path served as a model the scholars might choose. At the Havenwoods campus I shared the morning’s opening session with UW Sheboygan philosophy professor David Louzecky, a career choice the young people might otherwise not have on their horizon.

The Camp Umoja scholars and their staff celebrated the completion of the summer program with an energy-packed finale on Friday, Aug. 4. It drew a standing-room only audience. I was invited, with a friend or friends. I found there a fine example of building the city we need, what the non-violent tradition in the civil rights movement called the beloved community.This spirit of welcoming friends and extending the invitation opens up doors, important to building a supportive community, and community is another of the values Camp Umoja endorses and practices.

At the finale, each group of scholars presented a performance that in the words of Camp Umoja’s founding director Allen Ruppel “spoke from their hearts through dance, music, African drumming and personal poetry. They spoke of a history of a people’s pain, suffering and hope for the future in a very personal way.”

The presentation of one group of middle grade scholars in particular exemplifies the Freedom School strategy of learning African-American history in ways that bring history to life. Each performer wore a t-shirt she or he had decorated with the name of a person important in African-American and civil rights history, for example, John Lewis, Muhammed Ali, Rosa Parks, and, yes, Ruby Bridges. The scholars shared their time and the microphone to tell about the person whose name they wore, each scholar contributing an important part to the collaborative performance in which the whole adds up to even more than the sum of its parts.

The drumming that opened the show and accompanied several of the presentations spoke of the energy and the depth of feeling scholars and staff put into their work. It also infused the evening with an enthusiasm that we carried with us as we walked to our homes and cars. Camp Umoja and its finale offered models of drawing on civil rights history to help build community and get us moving again in positive directions.