You are here: Home / Home / Carousel / Community leader in wake of Clarke resignation: ‘The struggle is permanent’
Share this... 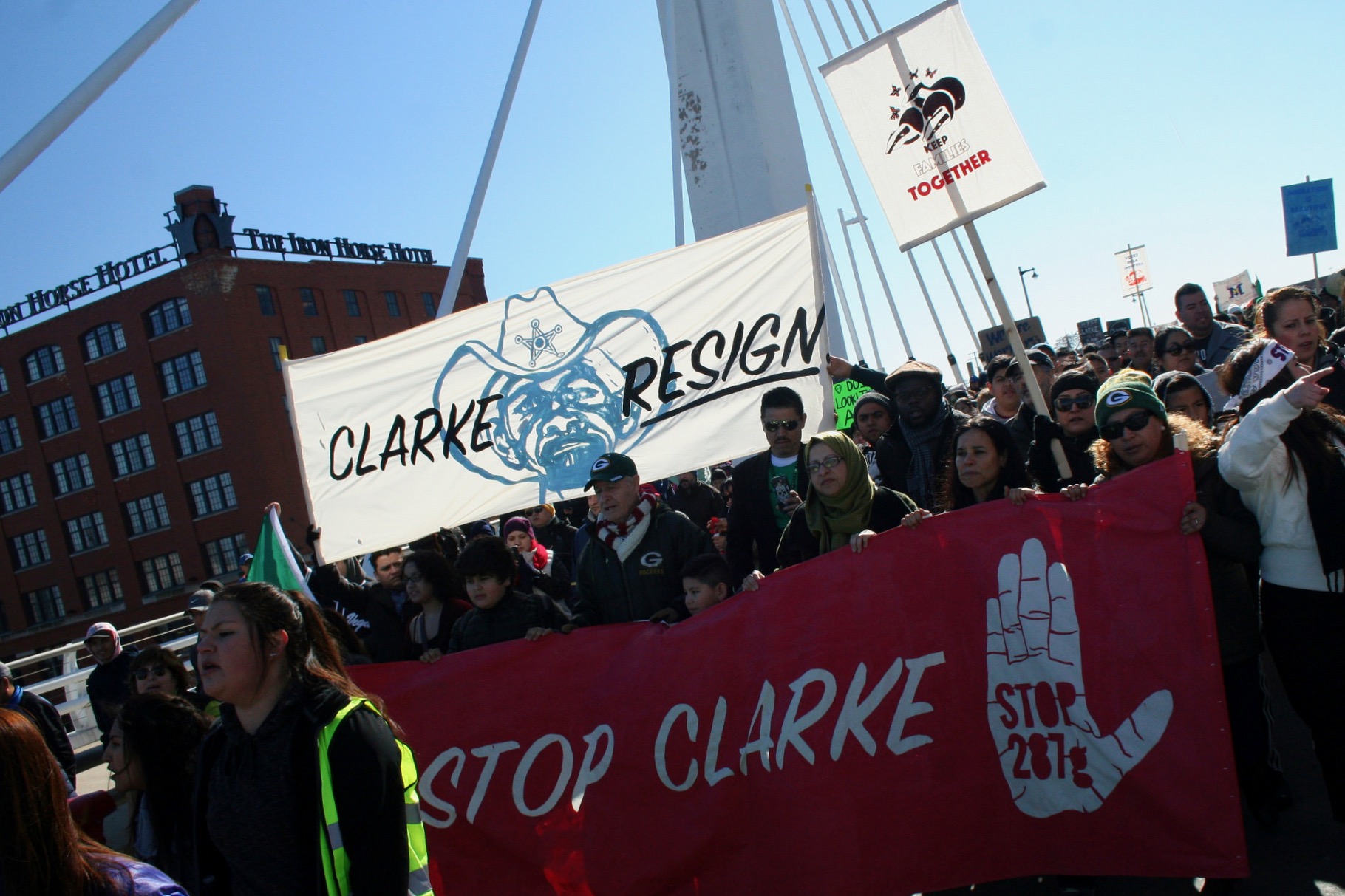 Christine Neumann-Ortiz and other leaders carry signs at the Day without Latinos, Immigrants and Refugees march in February. (Photo courtesy of milwaukeestories.org)

Leaders of a community coalition and an elected official who called for Milwaukee County Sheriff David Clarke to step down are hailing his sudden resignation as a victory, but saying there is still work to be done.

Voces is a member of the Coalition for a People’s Sheriff, a group of organizations convened to defeat Clarke because of his “incompetent,” “unethical” and “inhumane” actions. Clarke has been in office since he was appointed in 2002. Since April 2016, six people have died — the most recent earlier this week — while incarcerated at the Milwaukee County Jail, which was managed by Clarke. He has also been criticized for using county funds while traveling for media engagements.

Recently, a grand jury recommended charges against seven people involved in the detention of Terrill Thomas, who died of dehydration while in the county jail. Neumann-Ortiz and Milwaukee County District 10 Supervisor Supreme Moore-Omokunde suggested scrutiny for those actions should extend to Clarke, who Neumann-Ortiz said, “promoted a culture of neglect and abuse.”

Milwaukee County District Attorney John Chisholm will decide who to charge in the case. The DA’s office did not respond to questions about when a decision could be expected, or whether charges are being considered against Clarke. 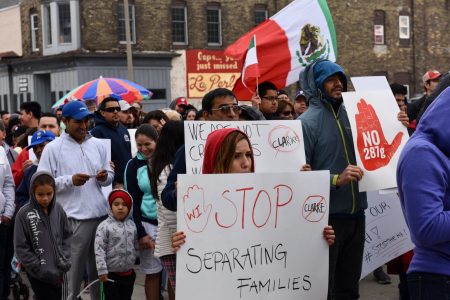 Thousands of people demonstrated for immigrant rights, in a May Day march organized by Voces de la Frontera earlier this year. (Photo by Sue Vliet)

While in office, Clarke also applied to take part in the federal 287(g) program, which trains and authorizes deputies to act as immigration agents. The program was popularized by former Maricopa County Sheriff Joe Arpaio, and has been called racially discriminatory. Arpaio was recently pardoned by President Donald Trump after being convicted of criminal contempt for violating a court order designed to stop illegally detaining people because of their suspected immigration status.

Clarke was in Nashville for a National Fraternal Order of Police convention when a resignation letter was delivered to the Milwaukee County Clerk just before noon Thursday. In a written statement from the Sheriff’s Office, Clarke, whose term would have ended next year, said, “I have chosen to retire to pursue other opportunities.” Clarke declined to answer additional questions about the reason and timing of the decision.

Gov. Scott Walker will appoint an interim sheriff who will serve until next year, when voters will elect a new sheriff. Walker’s office did not respond to a request for comment.

Walker ignored calls from Voces, the Coalition for a People’s Sheriff and others, to remove Clarke from office. Neumann-Ortiz said mounting pressure — including two statewide boycotts and demonstrations that attracted tens of thousands as well as the threat of lawsuits and possible criminal charges related to the jail deaths — contributed to Clarke’s departure. She said it is “an example of the pressure that can be brought to bear when we unite and when we have clear demands around the kind of community we want to build.”

In a statement, the Wisconsin Working Families Party questioned Walker’s willingness to listen to constituents now.

In June, when Clarke was being considered for a federal appointment, The Coalition for a People’s Sheriff submitted a letter to Walker outlining a platform that opposed the implementation of 287(g) and endorsed a sheriff who would work with the community to protect human rights and address systematic abuse against traditionally marginalized groups.

Neumann-Ortiz encouraged residents to call and email Walker — as well as sign a petition that Voces will re-release — urging him to appoint someone whose character aligns with the platform. She said it’s important to “send a message,” calling this “an opportunity for the people to really put pressure to make sure that these abuses end.”

Ultimately, voters will have an opportunity to elect a new sheriff in 2018. According to Neumann-Ortiz, it’s essential that the new sheriff work with residents to address Milwaukee’s “shameful” legacy of poverty and mass incarceration in an effort to build “strong and beautiful communities where all families can prosper.”

She said, “That’s the community we want built, and it’s up to the people to make that happen.”

Voces will participate in a Labor Day march Sept. 4 in support of working people, a living wage and immigrant workers. On Sept. 18, the first day of the state’s legislative session, the group will be in Madison to protest Assembly Bill 190, which would require municipalities to hold people for 48 hours who were arrested for a crime and suspected of being in the country illegally.