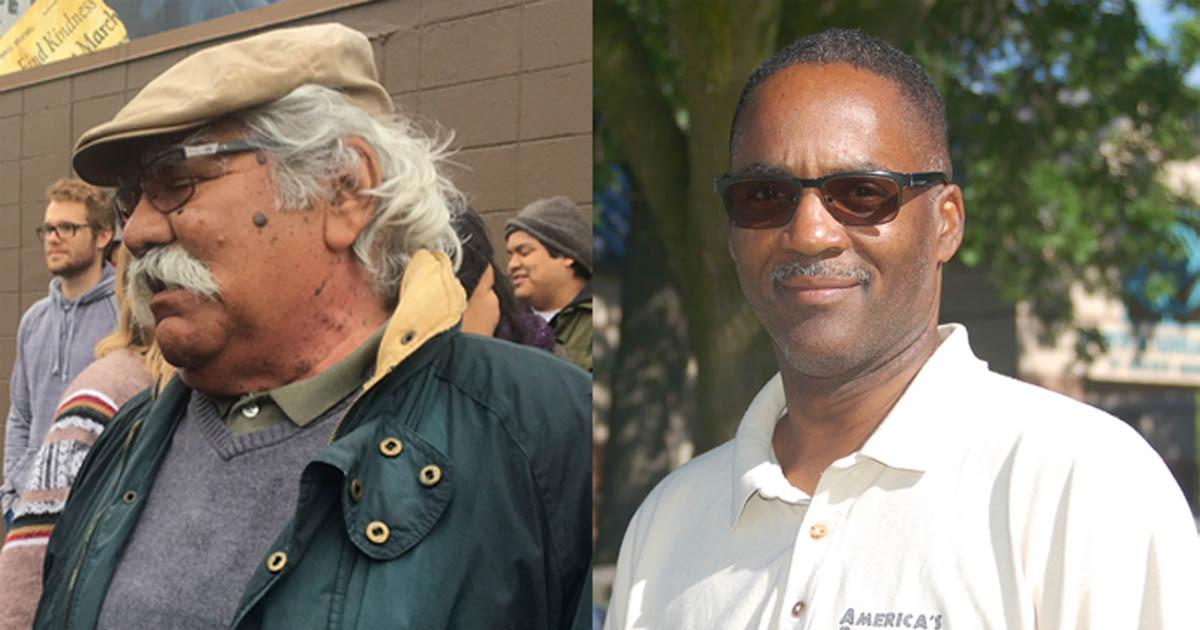 The 2017 recipients of the Frank P. Zeidler Public Service Award have been named as Jesús Salas and Reggie Jackson. Jesús Salas is a life-long migrant workers activist, educator, and a former member of the UW-Board of Regents. Reggie Jackson is a public speaker and writer concerning equal rights and Black history, as well as Chief Griot and leader at the America’s Black Holocaust Museum.

Mr. Salas and Mr. Jackson will each be presented with the Zeidler award during a special ceremony on Tuesday, September 26 at 8:30 a.m. in the third floor Council Chamber Anteroom (prior to the start of the regular meeting of the Common Council) at City Hall, 200 E. Wells St.

“The Committee’s decision recognizes these two outstanding leaders, coming from different segments of our community, who share a common vision of advocating for those whose labor has contributed to our economy but who have been marginalized and even excluded, physically and socially. Their positive examples and inspiring messages need to be recognized, now and for future
generations,” said Arthur Heitzer, vice-chair of the Frank P. Zeidler Public Service Award Selection Committee.

Jesús Salas is a third generation migrant worker whose family had traveled from Texas to the Great Lakes region to harvest crops during the full decade of the 1950’s. Eventually his family settled in Wisconsin where Salas graduated from high school and attended UW-Oshkosh. In the 1960’s, he recruited children from the migrant worker camps to create the first day care center for migrant workers in the state. Over the years, he studied wages of migrant workers, held marches to improve living and working conditions, and carried out the first migrant worker strike in Wisconsin history.

Mr. Heitzer added: “Two prior recipients of the Frank Zeidler Public Service Award took the time to actively endorse his nomination, as well as the retired president of the Wisconsin AFL-CIO. We are honored to recognize Mr. Salas.”

After moving to Milwaukee, in 1969 Salas became the first Latino CEO of United Migrant Opportunity Services (UMOS). As a result of these efforts, it led to the now, Roberto Hernandez Center. He also returned to his roots in Texas to help shape the political climate and address the state’s long history of poor working conditions. Eventually he came back to Milwaukee and embarked on a long teaching career, and then a position on the UW-Board of Regents. Salas eventually resigned his position on the UW-Board of Regents to protest the state’s refusal to grant in-state-tuition for qualified UW- System children of undocumented workers.

Alderman Robert J. Bauman, chair of the Award Selection Committee said, “Over the years Mr. Salas has been one of the most important spokesmen for the Latino community and brings to light the plight of migrant workers and their children. His work is worthy of recognition for many reasons including his selfless desire to improve the lives of others,” Alderman Bauman said.

We are equally thrilled to recognize Reggie Jackson, an individual who identified a need in the community and turned it into a movement that promotes equal rights and education. In 1994, Mr. Jackson was an electrician driving down North Avenue when he noticed the America’s Black Holocaust Museum and decided to go inside; there he met an unsung civil rights hero who founded the museum to promote racial equality and education. Finding a need in the community for more awareness, he quickly began volunteering at the museum, became the Head Griot at ABHM and trained new volunteers before serving on the museum’s board and then as its chair in 2007. Since then, Mr. Jackson expanded the museum’s vision by creating a museum without walls with an online platform, publishing house, speakers, and public programing to create interracial dialogue and an educational experience.

Alderman Bauman says, “Mr. Jackson is the type of citizen everyone hopes for, he is actively engaged in making our community more open and equal to all of our residents. His leadership has reshaped our ideas, challenged old notions, and made us a more educated society,” he said.

Mr. Jackson regularly speaks at prestigious venues, universities, and companies as a diversity trainer. During the last several years Reggie drew overflow crowds to his four-part series called Do Black Lives Matter? The Historical Devaluation of Black Lives in American History. Mr. Jackson was also invited to sit on Zeidler Center for Public Discussion and the Wisconsin Humanities Council, as well as the Executive Committee of Rid Racism Milwaukee. His ideas are valued not only by local media outlets but also on national news outlets including CNN. As an accomplished writer, speaker, scholar, and activist he has transformed the way we look at race relations and African American history.

About Reggie Jackson, Mr. Heitzer said: “It is rare for us in Milwaukee to identify someone as a public intellectual, but Reggie Jackson already fits the bill, and we look forward to hearing much more from him in the future.”

June M. Perry, a member of the Frank P. Zeidler Public Service Award Selection Committee, said Mr. Jackson “Gives countless hours of his time to our community and gives us new perspectives on

race issues we may face daily. He has an incredible ability to bring inequality and racism to light in a way that is honest and insightful for the betterment of our community.”

Both of these gentlemen have made significant contributions to Wisconsin and we are grateful for the ways they have bettered the lives of strangers, our community, and the ripples of their efforts have been felt nationwide. As a whole we can say that our community is lucky to have both men who have demonstrated a level of integrity, selflessness, and passion for the causes they hold dear. Again, we look forward to publically acknowledging their contributions in our ceremony on Tuesday, September 26 at 8:30 a.m. in the third floor Council Chamber Anteroom (prior to the start of the regular meeting of the Common Council) at City Hall, 200 E. Wells St.