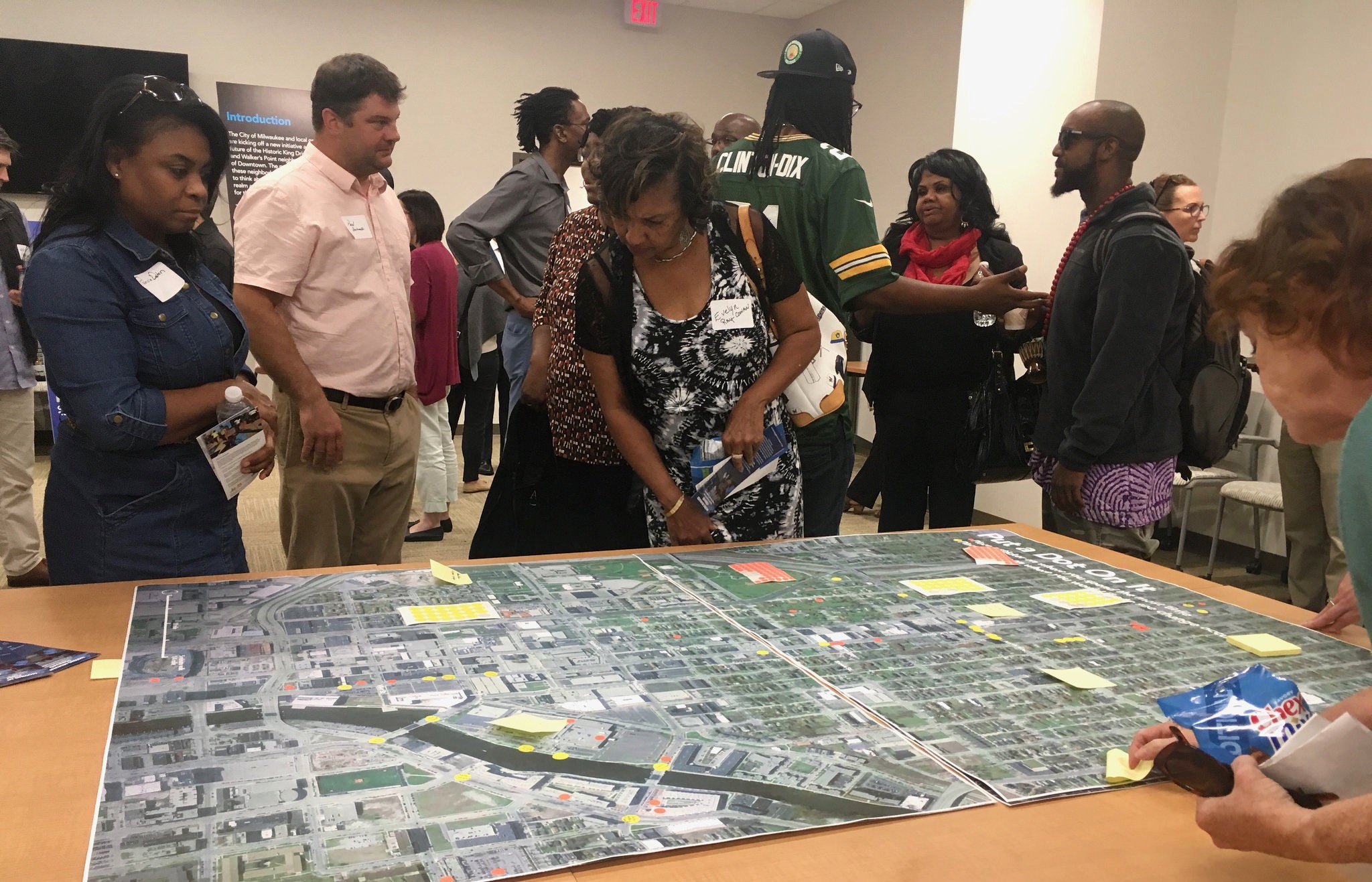 People who live or work in the neighborhood indicate where they spend the most time and what development they’d like to see there. (Photo by Elizabeth Baker)

A recent city planning open house allowed Historic King Drive residents, workers and business owners to engage in conversations with developers about how a potential extension of the Milwaukee Streetcar route could bring economic growth to their neighborhood.

Still undergoing construction of the initial 2.5-mile route downtown, the streetcar line could – depending on funding – eventually extend north along King Drive to Bronzeville and south to Walker’s Point.

The City of Milwaukee hosted the meeting at Schlitz Park, 1555 N. Rivercenter Drive, to listen to how citizens envision the future of their neighborhood and to inform a strategic plan that maximizes economic impact and meets neighbors’ needs. A similar gathering took place in Walker’s Point the day before.

As dozens of people buzzed about the conference room talking with friends, neighbors and coworkers — as well as the city planners and developers — some voiced hope and excitement, while others expressed concern about city plans.

Elaine Schweitzer, a Brewers Hill resident of two years who works in Schlitz Park, said she is pleased with the city’s dedication to developing the neighborhood and with the possible extension of the streetcar route along Martin Luther King Drive.

“MLK, to me, is sort of symbolic of pulling different facets of the neighborhood together,” Schweitzer said. “It seems like it’s sort of this odd, unnatural boundary between what the city’s willing to invest in and what it has sort of left to happen on its own.” 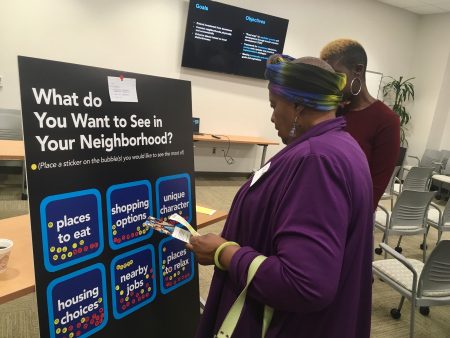 Attendees place stickers on a board to show what development projects they’d like to see in their neighborhood. (Photo by Elizabeth Baker)

Antoine Carter, Groundwork Milwaukee program director who oversees two projects on King Drive, looked shocked as he viewed a map of the planned streetcar extension along King Drive. “It only goes to North Avenue?” Carter asked.

He said he doesn’t think it makes sense for the streetcar line to end at such a major intersection when neighborhoods north of North Avenue could also benefit.

Carter pointed out the racial segregation that exists across these streets and among these neighborhoods and noted that the street could unite and strengthen the city, if it is treated the same as other parts of Milwaukee by local leadership.

“It’s kind of representative of how people are in this city anyway,” Carter said. “It indicates no forward thinking. … The plan should be for all of MLK Drive to thrive.”

Like Carter, others who studied the map of the projected streetcar route expressed concern and raised questions. City Long Range Planning Manager Sam Leichtling acknowledged common perceptions about the streetcar — that it will serve only a certain demographic and travel only to downtown shopping areas.

Leichtling and other city planners and developers listened to the concerns but did not address them directly. They encouraged attendees to think broadly about their hopes for the neighborhood. Even if the extended streetcar does not pan out, Leichtling said, local feedback still can inform planning and investment going forward.

Community members were encouraged to share their ideas at several interactive stations. At one, they posted their “great idea” for the neighborhood. At another, they placed a sticker on a map to mark where they live or work and wrote what sort of development they’d like to see there.

Gerald Bester, a business owner opening an office on King Drive, told Leichtling that he would like entertainment options such as a theater and different restaurants to take an employee or client out for lunch.

“I’ve been studying the area for a couple years now, and I got stuck on it because there’s so much potential in that corridor, but it’s underutilized,” Bester said. “One of the purposes of picking this particular location is future growth and the opportunity to get involved in strategic planning.”

Genyne Edwards of P3 Development Group, one of the companies contracting with the city on the Historic King Drive/Bronzeville project, said recent changes such as the Bublr Bikes parking station in Schlitz Park and Pete’s Fruit Market on the corner of Martin Luther King Drive and North Avenue have excited neighbors, but they’d like to see more restaurants, retail options, green space and other means of transportation around the area.

Meetings such as this are part of a larger strategic planning study funded by the U.S. Department of Transportation and made possible by the Historic King Drive BID and Harbor District Inc. The city is working with transit development planning firms on the yearlong effort. The goal is to enable neighborhoods to benefit economically from a potential transit development project, but also respect and preserve their historic identities.

The group plans to hold other public meetings before the end of the year, but no dates have been set.