You are here: Home / Neighborhoods / North / Amani / North Side community members plead with public to drive safely
Share this... 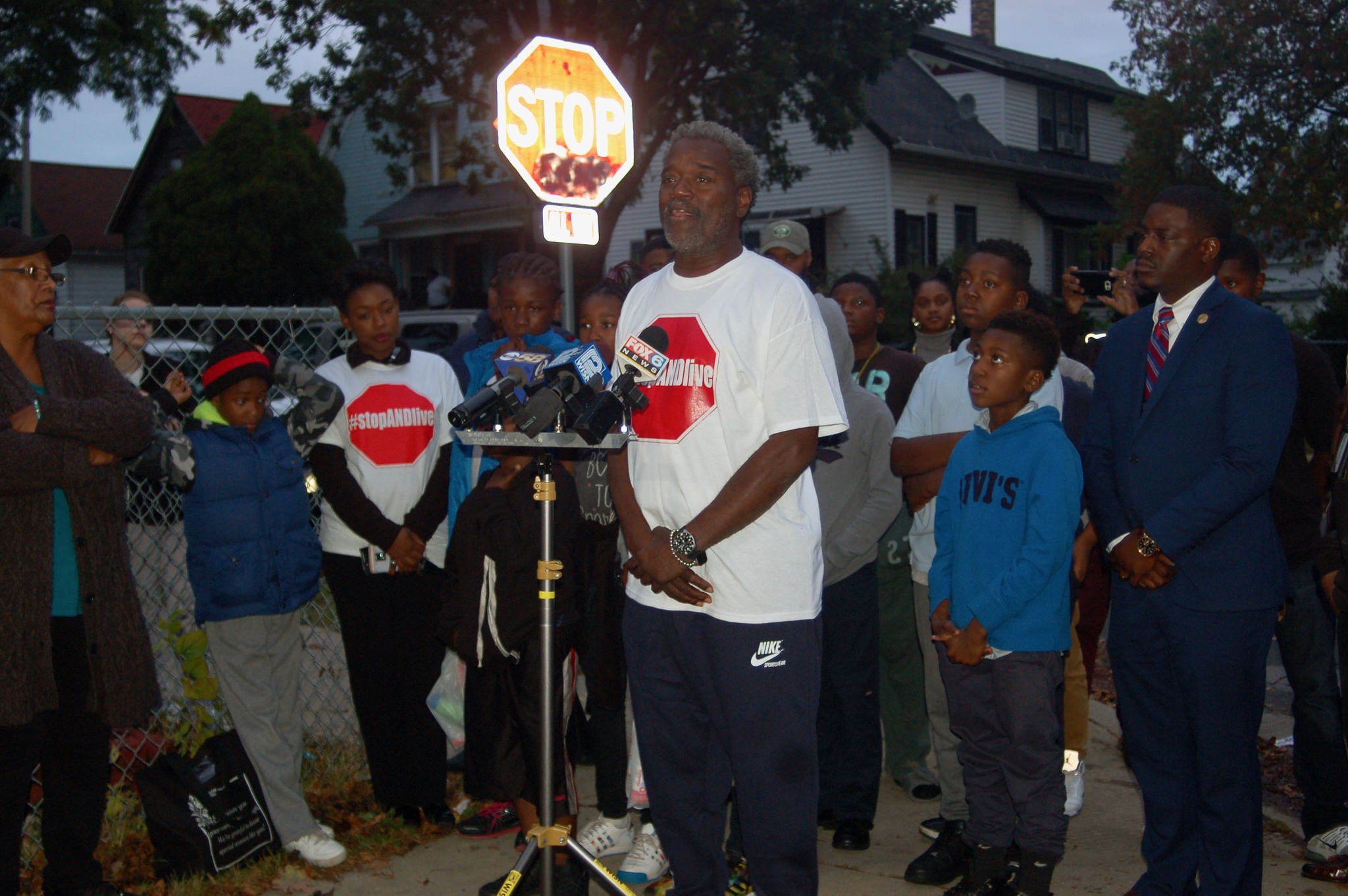 As if it were coordinated to emphasize the point, just as State Rep. David Bowen told 40 community members and a half-dozen journalists, “We want people to actually respect traffic laws because it’s important for the safety of everyone,” a green SUV came speeding past a stop sign and through the intersection of 12th Street and Concordia Avenue behind him.

As four police officers among the crowd sped off in an unmarked car and a pair of motorcycles, Bowen continued:

“We are not respecting traffic laws,” he said. “We have to stop at stop signs.”

Bowen, other elected officials and community residents gathered at the intersection Wednesday in response to the death of Joseph N. Blunt, 16, who was thrown from the hood of a moving vehicle at the same intersection the day before, to make a plea to the public to drive with care and hold each other accountable. 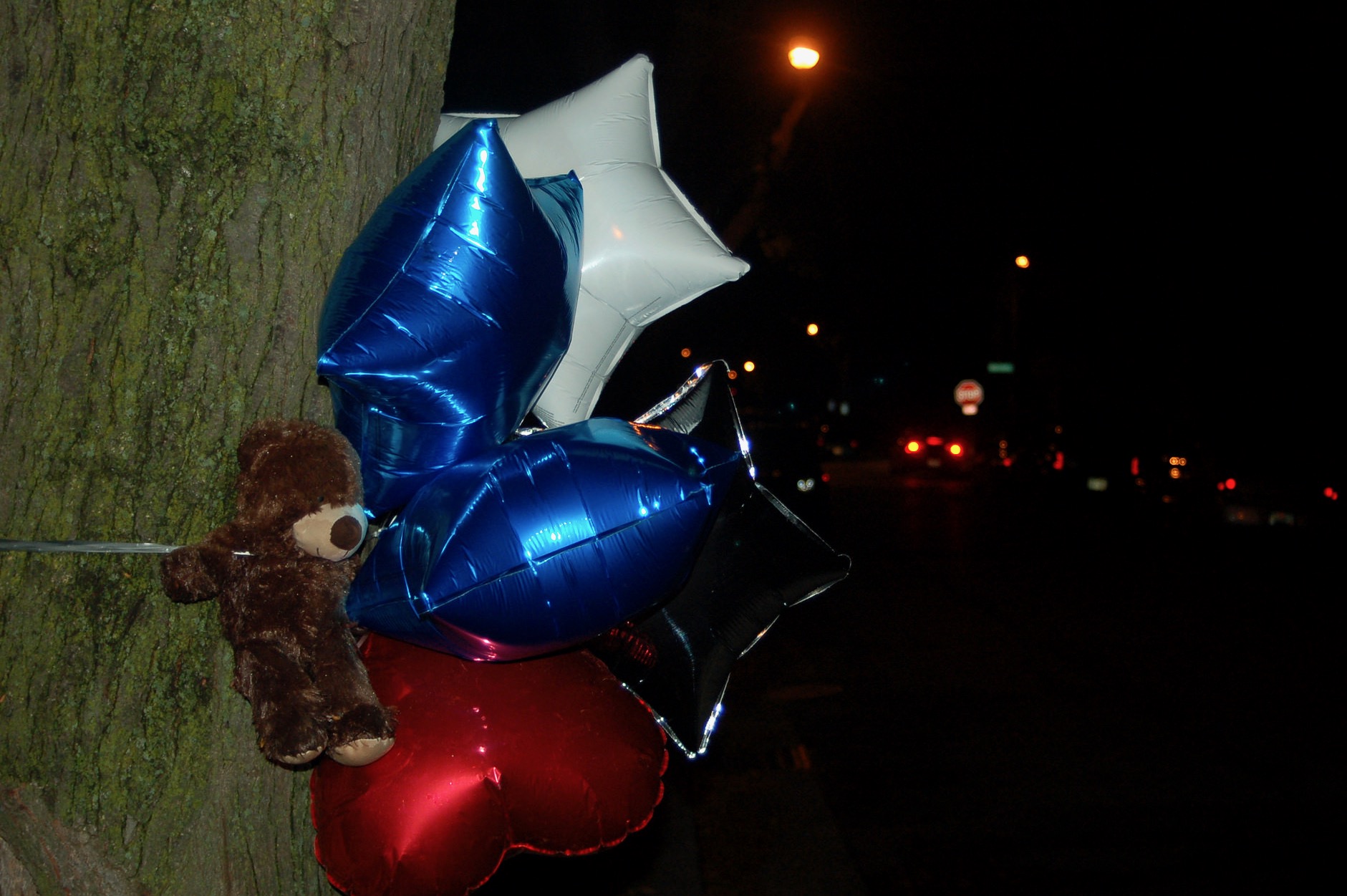 Community members created a small memorial for Joseph N. Blunt, 16, who died at the intersection of 12th and Concordia streets after a reckless driving incident Tuesday. (Photo by Elliot Hughes)

“I’m asking you to just put a stop sign in your mind,” said Andre Lee Ellis, a local activist who organized the gathering. “When you see a stop sign at the corner, stop so that you and others can live.” Ellis and others wore t-shirts with red stop signs saying “#stopANDlive.”

A 21-year-old man was arrested in connection with the incident, which occurred at about 10:20 a.m. Tuesday along the 3300 block of 12th Street, according to the Milwaukee Police Department. Blunt was thrown from the hood after the car braked. He later died of his injuries at a hospital.

Police did not say why Blunt was on top of the vehicle, but speakers at Wednesday’s event characterized it as two people fooling around.

Blunt’s death is yet another instance of reckless driving, which community members and city officials have said is plaguing not just the Borchert Field neighborhood, but the entire city. The Northwest Side Community Development Corp. organized a “Rally for Safe Streets” at North 31st Street and West Capitol Drive on Monday.

As of Oct. 2, 47 people died from traffic crashes in the city of Milwaukee this year, including 15 pedestrians, according to police. Traffic crashes killed 57 people in Milwaukee in 2016 and 64 the year before that.

At the gathering Wednesday and in various committee meetings in City Hall over the last several months, frustrated community members have described frequent instances of cars running red lights, speeding and driving in an overall aggressive manner.

“It’s almost gotten to the point that when you’re at the corner now and the light turns green for you, you have to wait a few seconds just to make sure that it’s clear from the traffic that is supposed to be stopping and waiting for you,” Ellis said.

Other speakers at Wednesday’s gathering included State Rep. David Crowley, State Sen. Lena Taylor and Running Rebels Executive Director Victor Barnett. Although many of them called on the city and police to step up efforts to reduce reckless driving, the focus of their message fell mainly on community members to just slow down and encourage others to do the same.

“Situations such as this are occurring way too often,” said Crowley. “We can’t continue to allow reckless driving to take over our streets. We can’t continue not to hold each other accountable.”