According to the Milwaukee Secure Detention Facility (MSDF) website, the purpose of the facility is “to protect the public through the detention of adult offenders in a safe and secure institution.” It goes on to say that MSDF is “committed to the successful reintegration of offenders to the community, focusing on accountability, programming, and a high level of collaboration with community partners.”

But stories of former inmates paint a much grimmer picture. According to six individuals who spent time there, the facility lacks any natural sunlight, proper ventilation or medical care for prisoners. They described a place plagued by overcrowding where inmates are kept in cells as many as 23 hours a day and subjected to excessive heat. William Harrell, a minister who spent time at MSDF in the early 2000s, attributed some of the 17 deaths that have occurred at the facility — where he estimated temperatures could reach 100 degrees — to heat exhaustion.

The event, facilitated by Mass Story Lab — a community storytelling project whose mission is to make stories of people directly impacted by mass incarceration “an instrument of justice” — was part of a campaign, launched in June, to close the state-run, high-rise detention center. 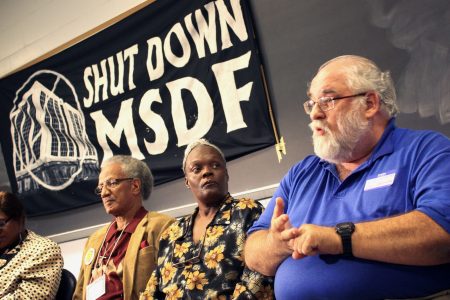 Rob Schreiber (right) speaks about his experience with MSDF as Sharyl McFarland (middle) and William Harrell (left) look on. (Photo by Jabril Faraj)

The #CLOSEmsdf Campaign is supported by MICAH, UBLAC, NAACP Milwaukee Branch, 9to5 Wisconsin and Voces de la Frontera, among others. Mass Story Lab is involved in the effort to close Rikers Island, the infamous New York City detention center, and has held dialogues in nine cities, nationwide.

Charles Hampton, whose son is at MSDF, said people who need medication don’t receive it and inmates receive half portions at meal time.

“I came out and nobody knew who I was because I had lost 60 pounds in six weeks,” said Rob Schreiber. Schreiber described an environment where activities meant for personal improvement — even reading books — were frowned upon or not allowed.

He added, “There is no rehabilitation in the Department of Corrections in the State of Wisconsin. Everything is based on fear.”

“It had me real depressed — it had me suicidal,” Shirley Moffett said of MSDF. Moffett shared a cell with three other women during a three-month stay at the detention center.

EXPO Assistant State Director Mark Rice, who spent six months at MSDF after being arrested for disorderly conduct while “having a mental health crisis,” said he saw “atrocities” there, including one man who committed suicide and others who mutilated themselves.

According to those who spoke, Rice’s experience is indicative of how people end up at the facility. The charges against Rice were dropped two days after he was arrested but his parole officer decided to move forward with the process to revoke his parole anyway, a practice known as “crimeless revocation.”

Rice said this practice, which includes imprisoning people for violation of supervision rules and other small infractions, flies in the face of people’s right to due process.

“Incarcerating people at MSDF defies our notions of freedom and justice,” said Rice. “MSDF is beyond reform; it’s time to shut it down.”

Tom Moore, head of the Close MSDF Research Committee, which is exploring alternatives to detention, said treatment programs don’t have to confine people, but can be based in the community. Other attendees suggested resources used to operate the facility be reinvested to provide better mental health and substance abuse treatment, access to high-quality education and help securing living-wage employment. 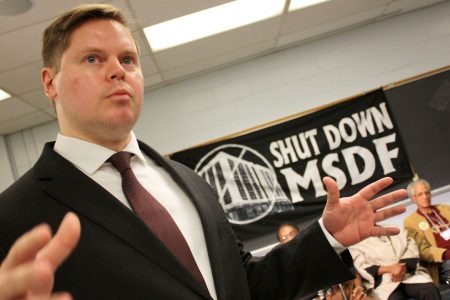 But conversations at the event did not stop with MSDF. Many attendees took issue with the criminal justice system as a whole, noting a racial component to enforcement, particularly in Wisconsin, where black men are more than 12 times as likely as whites to be incarcerated.

“When you have 2.7 million people in prison (nationwide) and 70 million people with a criminal record, I would say that that is a huge human rights atrocity that we have not fully reckoned with,” said Piper Anderson, creator and lead facilitator of Mass Story Lab. “Our country needs to do some serious work to reckon with the impact of incarceration.”

Hampton, who periodically visits Racine Correctional Institution to meet with inmates, said there are “several” fathers and sons incarcerated together at that institution. According to Melissa Ludin, president of EXPO, children of women who have been incarcerated have an 80 percent chance of ending up in jail. The population of incarcerated women has increased 700 percent since 1980, mostly due to non-violent drug offenses, she added.

“It’s a waste of time, a waste of money and there’s nothing productive that comes out of it,” attendee Fran Korthof said of the prison system. “We need to be helping people form lives, rather than punish, and punish and punish some more.”

Rice said he hopes the event will help to humanize the incarceration issue, adding, “We’re all human beings.”

Sharyl McFarland, whose 17-year-old son spent three weeks at MSDF before being sent to the House of Correction, said those affected by incarceration cannot be silent.

“We need to start inside ourselves,” said attendee Barbara Richards, adding that it’s important to understand society has failed those who end up incarcerated.

Richards said people need to start with small actions, help each other when possible and not approach situations out of fear. “Fear dominates and, to get past that is a very big step.”