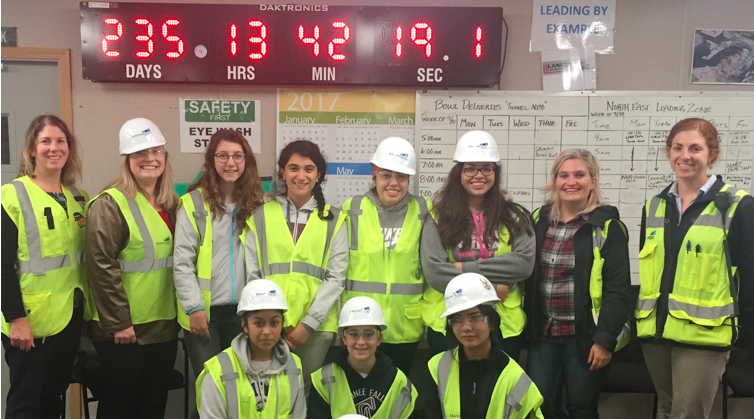 The Milwaukee Bucks hosted its last home opener at the BMO Harris Bradley Center last week. The future of the Bucks is bright, with a top-ranked NBA team, forward-thinking ownership, and a new state-of-the-art arena to move into less than a year from now.

The same week as its home opener, the Bucks also hosted a once-in-a-lifetime tour of its new facility for a dozen students from St. Joan Antida High School’s robotics team.

These students’ futures are equally as bright as many of them are considering jobs in STEM (Science, Technology, Engineering and Math) fields, including engineering and construction. Construction jobs are numerous in the region, thanks to projects like the Wisconsin Center District’s new arena, which the Bucks will lease. 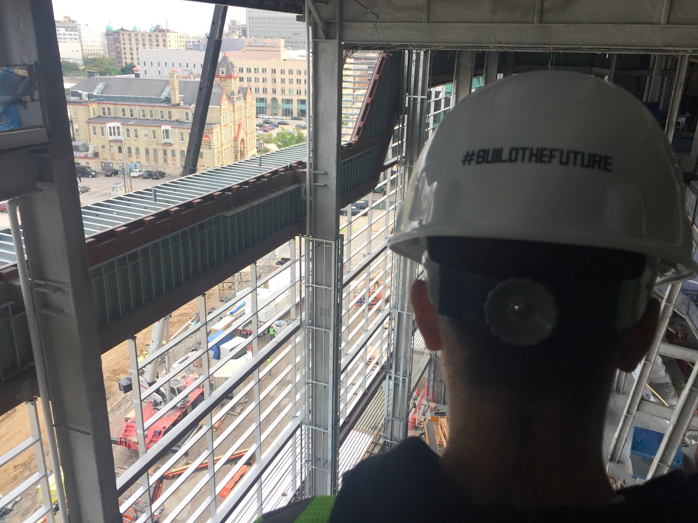 St. Joan Antida High School is an all-girl school. So it was fitting that female construction workers from Mortenson Construction, which is managing the arena project, took the St. Joan’s girls on the behind-the-scenes tour of the 730,000-square-foot facility.

One of the tour guides, Tess Massaroni, an assistant superintendent with Mortenson, said, “As high schoolers, many of the girls enjoy STEM learning and were interested in engineering, but were overwhelmed by the choices.  Touring the Arena was a unique opportunity to experience an active construction site and gain insight into different engineering pathways and potential construction careers.”

“Exposing our youth, especially young women, to different career paths is vital to helping them recognize what they might be passionate about,” said Massaroni.

The girls learned about more than 15 types of construction jobs involved in the arena project, the types of hours and skills involved in these jobs and starting salaries. They learned that skilled trades jobs are an excellent foundation for those considering careers in engineering. They also learned that around 700 dedicated and highly skilled workers showed up every day to work on the arena project, many of them women in managerial roles.

Alicia Dupies has a keen insight into the opportunities that exist for young women in the construction industry. Before becoming vice president of Corporate Social Responsibility for the Milwaukee Bucks, Dupies served as director of Project Development for Mortenson Construction. Dupies, who helped arrange the tour for the girls, explained that the school tour was a rarity due to the complexity of the work site and complicated logistics of conducting tours. “St. Joan Antida’s focus on introducing girls to careers in STEM is to be applauded. Considering the school’s focus on STEM and the fact that St. Joan’s is our neighbor, located just a few blocks away, we decided to host this special tour. We are hopeful that it sparks interest in construction careers in some of the girls.”