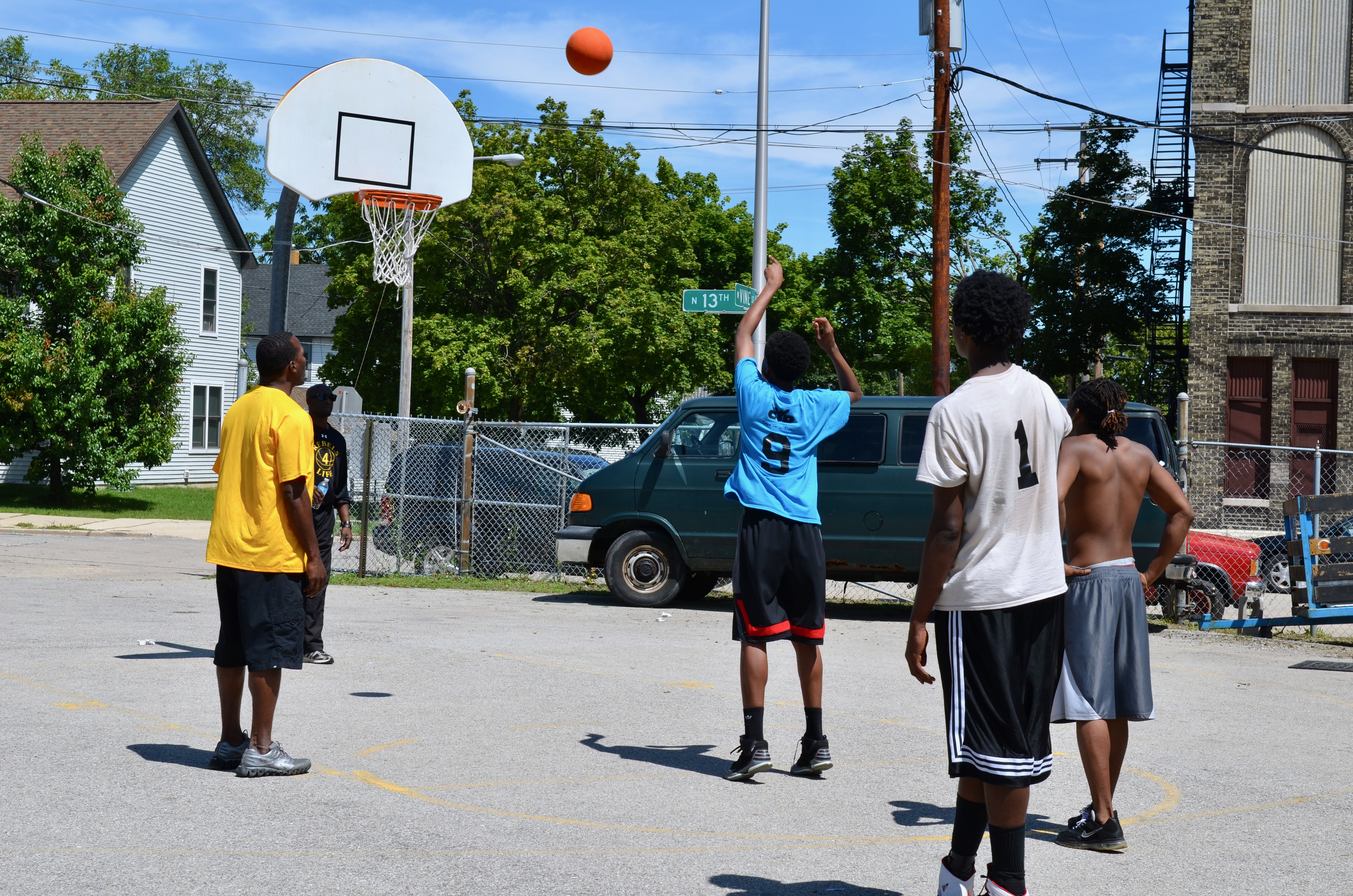 Young men play basketball at Running Rebels, one of five direct service nonprofits that received a federal grant through the city’s Office of Violence Prevention. (Photo by Sue Vliet)

Editor’s note: This article is the first in a three-day series about violence prevention efforts in Milwaukee.

When Muhibb Dyer saw a girl labeled “the toughest kid in school,” tell about watching her father get shot in the head as part of a writing exercise about truth, he knew she felt safe enough in that classroom to reveal her tragic story.

She had been sitting next to her father in his car. His head fell into her lap, she wrote. The perpetrators told her they weren’t going to kill her because murdering her father “was just business.” At the time, she was 9 years old.

To Dyer, co-founder of Flood the Hood With Dreams/I Will Not Die Young, telling the story is “the beginning of the process of change.” The nonprofit works with teens by leading large group presentations and smaller group writing sessions. Its goal is to allow teens who live in poverty in sometimes-violent urban neighborhoods to begin healing from their trauma by confronting their pain.

Trauma rooted in systemic poverty, racism and inequality is at the heart of much of the violence happening in Milwaukee, experts believe. One way the city is combating violence, which spiked in 2015, is by building the capacity of organizations operating violence prevention programs “focused on elevating non-traditional healing and mental health,” according to Reggie Moore, director of the Office of Violence Prevention (OVP) in the Milwaukee Heath Department.

The department was awarded a $5 million Resiliency in Communities after Stress and Trauma (ReCAST) grant in September 2016 from the Substance Abuse and Mental Health Services Administration (SAMHSA), a federal agency within the U.S. Department of Health and Human Services. Flood the Hood with Dreams/I Will Not Die Young was one of the organizations selected to receive a grant through the program. It was awarded $12,500 in the first year.

Due to administrative delays, Flood the Hood With Dreams/I Will Not Die Young is still working with OVP to procure its grant. Funds are transferred to the organizations after their work is complete.

The other direct service grantees are Employ Milwaukee ($170,000), Running Rebels ($100,000), The Parenting Network ($50,000) and My Sista’s KeepHer ($12,500). Moore said these organizations have also been approved for funding in the second year of the five-year grant, though he did not disclose the amounts they will receive.

Other partners included in the award are UW-Milwaukee, which is providing evaluation services, and Community Advocates, which is assisting with trauma-informed care and “mental health first aid” expertise and training.

Milwaukee is one of eight cities to be awarded the ReCAST grant. The others are Oakland, Chicago, Baltimore, Flint, Minneapolis, St. Louis and San Antonio. All ReCAST cities must be approved annually based on performance, impact and federal priorities. “SAMSHA has praised our progress in year one and we were successfully approved for year two,” Moore wrote in an email.

The purpose of the program is to assist high-risk youth and families and promote resilience in communities that have recently faced civil unrest. Strategies include implementing evidence-based violence prevention and youth engagement programs, as well as linking youth and families to trauma-informed behavioral health services, according to the SAMHSA website. 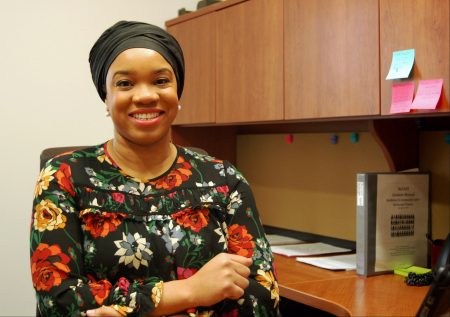 Sumaiyah Clark was hired to manage the ReCAST program in July. (Photo by Andrea Waxman)

Most of the anti-violence work funded through the grant is being carried out through established programs, which have scaled up their efforts. Progress in the first year included hiring a ReCAST program manager and disbursing the bulk of the initial funds.

Milwaukee native Sumaiyah Clark was hired in July to manage the ReCAST project. A graduate of UW-Whitewater in psychology, Clark also studied organizational leadership at Concordia University and earned an advanced certificate in urban anthropology at Marquette University.

In her first job, Clark worked as a teen mentor for pregnancy and violence prevention at Rosalie Manor. Her most recent position was senior director of strategy measurement and analysis at the Boys & Girls Clubs of Greater Milwaukee.

Her ReCAST responsibilities include insuring that partners communicate among themselves and have the resources they need, providing technical assistance, helping with the strategic plan and making sure the groups use the trauma-informed care approach.

Staff members working with youth at the ReCAST grantee agencies will be trained in “mental health first aid,” which will help them distinguish between normal teen behavior and indications that a youth may need to see a mental health provider, explained Jeremy Triblett, resource coordinator at Community Advocates.

To choose the programs included in the grant proposal, Moore said that OVP consulted with “a wide range of partners working with youth and families regarding healing, trauma and mental health.” Among those consulted were representatives from Community Advocates, Milwaukee County Behavioral Health Division, Wraparound Milwaukee, I Will Not Die Young, My Sista’s KeepHer, Children’s Hospital of Wisconsin, Beyond the Bell Milwaukee, independent therapists, cultural healers, Employ Milwaukee, Running Rebels, and others,” Moore said.

He added that his office was committed to “ensuring that the majority of the funds for this project were allocated to project partners with a strong track record for reaching the priority populations that we’ve identified for ReCAST—12-24 year olds and their immediate families.”

OVP will issue a Request for Proposals for additional project partners and services early in 2018, according to Moore.

Flood the Hood with Dreams/I Will Not Die Young was founded in 2005 by Muhibb Dyer and Kwabena Antoine Nixon to do anti- violence work with middle- and high school students and incarcerated youth.

They incorporate dramatic elements in their presentations and bring in speakers to illustrate the aftermath of violence in the real world.

“We hold assemblies in schools and bring in caskets and funeral directors to talk about their personal experiences with mothers of those who are killed and other indirect victims of violence,” Dyer said. They also use poetry and present real-life images “so that (the students) really and truly see” what happens after young people lose their lives in violent circumstances, Dyer said. The program served an estimated 1,200 students in 25 MPS schools in 2016.

The grant funds are allowing them to take the program to more students in more schools, he said. Their efforts help counter popular images that sensationalize and romanticize death, and keep youth away from dangerous activities such as dealing drugs and stealing cars, he added.

In addition, Dyer and Nixon meet with students in smaller group sessions where they create “a cathartic writing piece about what they have endured with violence,” Dyer said. The goal is to allow them to express and confront their pain so they can begin to heal.

Employ Milwaukee, the workforce development board serving Milwaukee County, launched “Career Plus” in the first year of the ReCAST grant. The program teaches workforce skills, financial literacy, trauma training and conflict resolution to junior and senior boys at four MPS high schools. It worked with 200 boys in year one, according to Robert Cherry, Employ Milwaukee’s director of the office of career exploration. 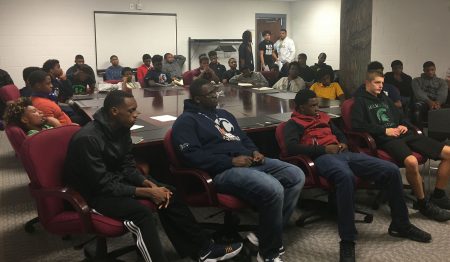 Employ Milwaukee also subsidizes jobs at local businesses for boys participating in Career Plus and Running Rebels’ “Be The Change” program, and connects them to the city’s Earn & Learn summer youth employment program.

The organization works with 50 employers including McDonalds, The Juice Kitchen, Walnut Way and West Care, Cherry said. The employers work to create a supportive environment and “teach them the right way,” Cherry explained.

Career Plus teaches such skills as how to take criticism. Cherry said he’s seen that some teens are unsuccessful in jobs because they come from environments where there’s a lot of trauma and violence. “They tend to over-react when someone gives them criticism. They take it as disrespect.”

Cherry said Employ Milwaukee plans to expand to eight MPS high schools next year. Though it has not yet identified the schools, he expects to more than double the number of students “Career Plus” serves.

Running Rebels’ “Be The Change” program was started in 2010 to address the black male academic achievement gap, according to the organization’s co-director, Dawn Barnett. Until it received the ReCAST grant, the educational support initiative for high school boys was only offered in summer. This fall the nonprofit launched its first year-round program with a cohort of 32 boys.

“When it was just a summer program, we struggled to stay in contact with these boys all year and keep them engaged,” said Ptosha Davis, program director.

Be The Change focuses on academic support and character and leadership development as well as building relationships with adult mentors. Beginning last summer, 64 participants worked at Earn & Learn jobs through Employ Milwaukee in the mornings. The program also includes recreational, cultural and enrichment activities.

Davis said Be The Change has worked with more than 350 boys over the seven-plus years of the program, with a 98 percent retention rate. The goal for next summer is 100 boys.

Using a framework developed by the Center for the Study of Social Policy, a parent leader builds a conversation around one of five factors that research shows protect against child abuse and neglect: parental resilience, social connections, concrete support in times of need, knowledge of parenting and child development, and social and emotional competence of children.

Staff members go door to door in the Metcalfe Park, Muskego Way and Harambee neighborhoods and invite residents to attend the cafés, which are held three times each month. Parent leaders are trained to plan and facilitate Parent Café conversations, for which they receive stipends.

With the ReCAST grant, the organization has increased the number of parent leaders it has trained from five to 26, said Eyleen Lopez, Parent Café coordinator.

“We create a platform of trust where … we share our stories through (speaking), writing exercises and poetry,” she said. Staff poets teach the young women how to express themselves in a way that helps them heal themselves and others.

My Sista’s KeepHer meets with middle- and high school girls during the day and after school, and with young women ages 19-25 at local businesses. Activities include workshops, a “spa day” that focuses on self-esteem; a mother-daughter pajama party; a poetry contest and an awards event that honors students and women in the community.

The grant is allowing My Sista’s KeepHer to expand, Nixon said. The program has been offered to 120 – 200 girls each school semester, but so far this year it is on track to work with 700 – 800 girls, in seven schools.

My Sista’s KeepHer and the other ReCAST grantees work both to heal trauma and to recognize and build resiliency. “Most people in the world have experienced trauma,” Triblett noted. The difference is whether they have adequate resources to bounce back.

“Healing from historical and persistent community trauma is the core premise of ReCAST,” Moore said, “and building the resilience of youth and families to not only heal but engage in self- and community advocacy is what ReCAST is truly about.”