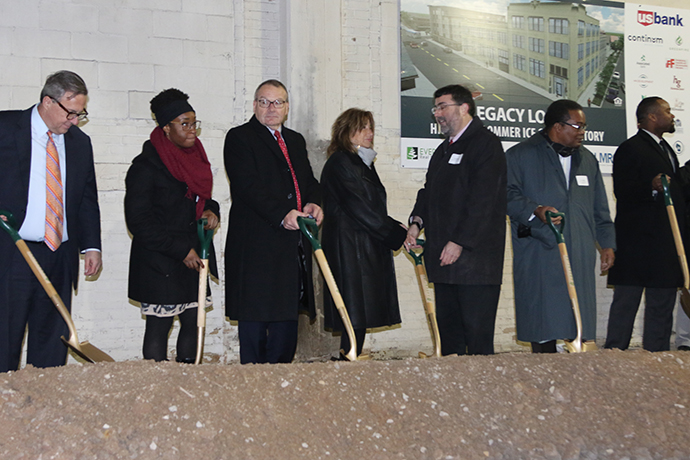 Arthur Cameron can see the construction on the new Legacy Lofts apartment complex from where he works at The Juice Kitchen, at 617 W. North Ave. Cameron said he’s intrigued by the project because the neighborhood needs more businesses. He hopes it will benefit people who already live in the community.

“I think it’s good as long as it’s not being gentrified and it’s not trying to push in a new wave of people,” Cameron said.

Legacy Lofts is a $13.9 million construction and redevelopment project of the three-story historic Blommer Ice Cream Factory and an adjacent empty lot at 1500 W. North Ave.

Last week, project managers, Milwaukee officials and community members gathered for a groundbreaking ceremony at the defunct factory, which has been vacant for 20 years.

Sally Peltz, founder and former president of Legacy Midwest Renewal Corp., thanked the neighborhood for making the project a reality. “If this (building) was in the Third Ward it would have been bought up. In our neighborhood this building could have easily been torn down but we have prevented that from happening.” 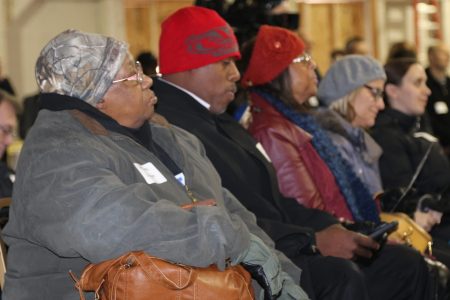 The existing historic Blommer building will be rehabilitated and converted into 38 one- to four-bedroom apartments. Immediately to the west, 26 more units will be built in a new, three-story building. About 1,500 square feet of street-level commercial space is also being built and will house the LMRC offices.

Vincent Ashford, a security officer with Walnut Way Conservation Corp., said he is looking forward to the opening of Legacy Lofts. Ashford works at The Innovations and Wellness Commons building on North 16th and North Avenue. He said that he expects to be contracted to work at the new apartment complex.

Ashford said the lofts could uplift the neighborhood. “It’ll boost the economy and it’ll beautify the neighborhood,” he said, “Hopefully it’ll encourage a working class and people who will take advantage of what the building has to offer.”

Ashford said he also hopes the building prompts the city to do more for the neighborhood. “We have a problem with our infrastructure in the inner city,” he said. “We need the roads fixed, we need police to know the environment and we need more businesses.”

Department of City Development Commissioner Rocky Marcoux said the project is important for the momentum on North Avenue, one of the longest streets in Milwaukee. “In between you can see all the highs and lows of the region. You see racial divides, lack of opportunity, and you also see people who have more money then they can count.”

The apartment complex, which took five years of planning, is being developed through a lead partnership between LMRC and Chicago-based Evergreen Real Estate Group.

District 15 Ald. Russell Stamper praised everyone involved for their hard work. “Yes it’s going to provide an abundance of opportunity and jobs and it’s going to be beautiful,” he said. “But when I see this building when I drive down 15th and North, it’s going to be a reflection of the teamwork and the hard work it took to be built.”

“The vision is simple. We want a clean, healthy, safe and vibrant community where everyone has the opportunity to become successful,” said Stamper. “It doesn’t matter how slowly we get there as long as we don’t stop.”