You are here: Home / Home / Carousel / Greater Milwaukee Foundation reports ‘On the Table’ results, plans for next year
Share this... 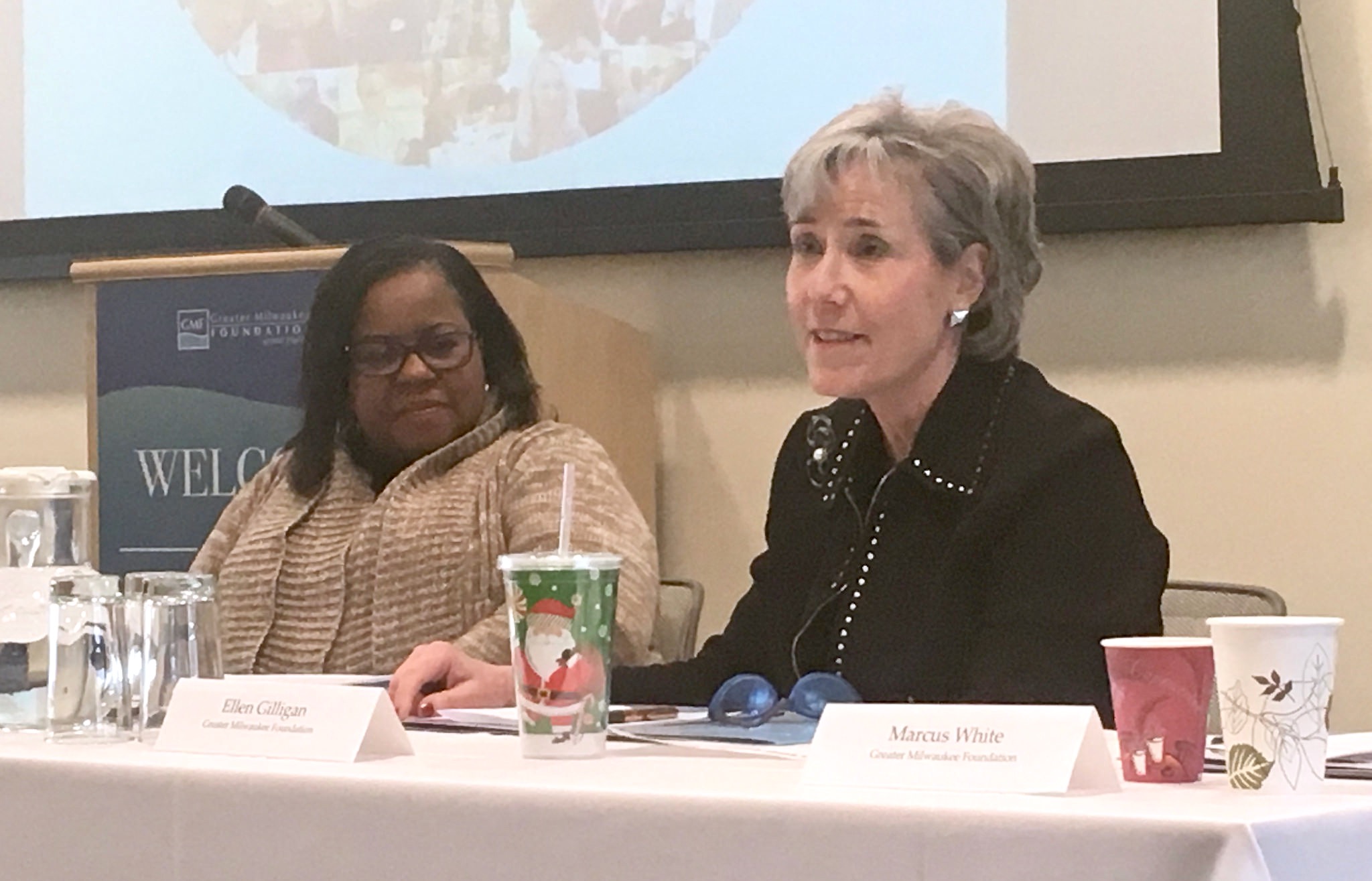 The Greater Milwaukee Foundation has sensed a “hunger for civil conversation” and a “desire to be better connected to one another” among members of different communities for about the past year, said Marcus White, vice president of civic engagement.

The success of On the Table, a GMF initiative to gather diverse groups throughout the city and region to talk about ways to improve the community, confirmed these speculations.

“One of the questions we would get was, ‘Will this just be more talk?’ so we were very pleased to see that over half the participants reported that their tables made plans to take next steps,” White said.

Some of these plans are already in motion. 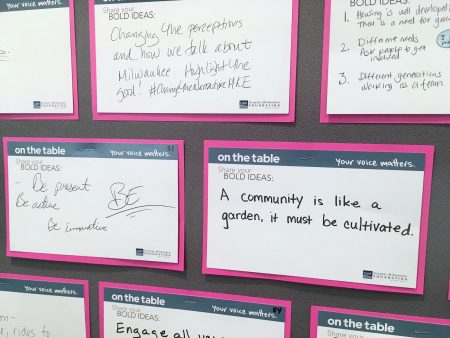 At On the Table discussions in October, participants wrote down bold ideas to improve their communities. Some were posted on boards at a Greater Milwaukee Foundation media briefing. (Photo by Elizabeth Baker)

Alicia Dupies, Milwaukee Bucks’ vice president of corporate social responsibility, and Kate Carpenter, America SCORES Milwaukee executive director, said they formed a partnership at On the Table to host trauma-informed coach and mentor training for people working with kids in the city. Jamar Wills, a program coordinator at the Boys & Girls Club of Greater Milwaukee, said the program has greatly benefited him and enabled him to help his players develop not only on the field but also as individuals. He coaches basketball and football for youth ages 9-14 years old.

At Calvary Presbyterian Church, about 25 people shared dinner and discussed topics of housing, place making and home. Parishioner Jonnie Guernsey said many participants expressed a desire to have more than one conversation per year about this issue, so she plans to host a few others throughout 2018.

Guernsey said the discussion was enhanced by the group’s diversity in terms of race and socioeconomic status. It also included people who receive housing services and people who work at organizations that provide these services. The attendees appreciated the opportunity to talk about housing in an open, honest environment and share a common interest in creating positive change in the city, she added.

A class at Messmer High School hosted students from Burlington High School for an On the Table event. The discussion went so well that the group is planning to meet again, this time in Burlington.

However, the voices of young people were largely missing from On the Table discussions, said Ellen Gilligan, GMF president and CEO. A goal for 2018 is to involve more youth, and GMF will make a special effort to involve more schools.

The foundation would also like to see more private homes and neighborhood groups host tables next year, rather than mostly large organizations and corporations. White added that he would like to see more elected officials joining tables as participants.

At more than 80 percent of tables — no matter the topic of conversation — issues of race, equity and inclusion came up. GMF hopes to increase racial diversity among participants in 2018, White said.

Overall, 42 percent of On the Table participants were nonwhite, a good representation when looking at the region, which includes Milwaukee, Ozaukee, Washington and Waukesha counties, White said. “But looking at Milwaukee city and county we need more people of color participating. … We think there were a lot of diverse tables, but probably not as much as there should be or could be.”

He said GMF will look for partners who can help host more tables to increase diversity in 2018.