Editor’s note: This is one of an occasional series of pieces about grassroots leaders in Milwaukee.

Vaun L Mayes, a community activist and founder of Program the Parks, grew up as a troubled teen, transferring from school to school. He attended three high schools before he was sent to Project Excel, an alternative school for court-ordered youth kicked out of Milwaukee Public Schools.

“I was a homeless teenager with no sense of direction,” he said, shaking his head. “I was stealing cars, active in mass fights and rock fights with the police. I did these things because I was mad about my situation and nobody cared about me.”

While he was still a student, Mayes got a job cleaning at the Hillside Terrace Family Resource Center to help get him on his feet and stay out of trouble with the law. In June 2016, Mayes, started a program in Sherman Park to help teens in his neighborhood.

“I worked with troubled youth who did a lot of the same things I did in my past, like stealing cars. I wanted to create this program to give kids the opportunity that I didn’t have as a kid,” said Mayes. 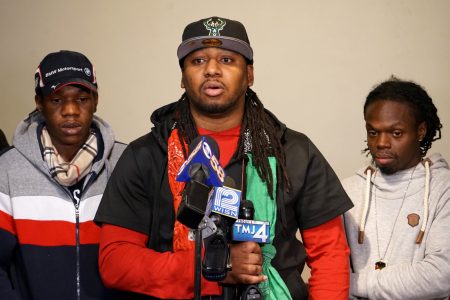 Every Friday, Mayes would serve pizza and show a movie, giving the kids something to look forward to.

Mayes said it was a challenge to run the Sherman Park program because the location was too big, making it difficult to keep track of the young people. He rented a space on the 600 block of Concordia Avenue where he could manage the participants as well as host a variety of programs.

“The money that I received to help fund these programs is 94 percent community donations,” he said.

Mayes does not seek government funding because he doesn’t want the restrictions that usually go along with the funds, including how the money should be spent.

Mayes said he has made connections nationally with the families of people killed in altercations with police, who reached out to him for help. He has been in touch with the families of Freddie Gray, who died while in the custody of Baltimore police officers, and Philando Castile, who was shot to death by a police officer in Minnesota. The mother of Tamir Rice, a 12-year-old shot by police in Cleveland, reached out to Mayes because of his work with youth.

“I have always worked with the community and with people and I was a youth not long ago. It’s important for me to be efficient and effective so I can help get parents empowered. These parents deserve justice,” said Mayes.

Mayes has created multiple activities and programs to engage young people. He has his own printing press and a studio area where participants can record, learn audio engineering and mix beats. He has a library filled with books and rewards the youth when they read and give an oral summary. “I put this into place so they have an understanding of what it feels like to earn,” said Mayes.

Mayes said his programs are about unity and uplifting people going through hard times.

“I want to be able to host town halls for neighborhoods that have issues,” Mayes added. “In order to fix the problem, we must identify the problem.”