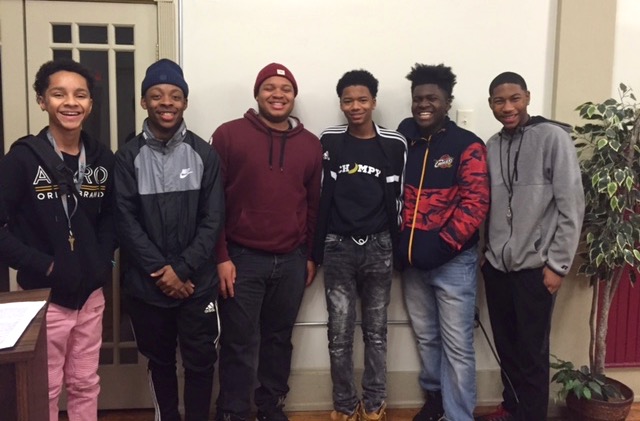 The data was consistent with YAC members’ feelings, as Ashanti Travers shared: “I feel like the media is one of the roots of racism — or it’s fuel to the fire—with how often people turn on their TVs or listen to the news, seeing negative images of young black men is inescapable.” Terrance Robinson explained how “seeing chronic, negative media images of young black men makes us feel disconnected from our community and divided from white people. . .it’s hard to have pride when the negative images are all you see.” Darius Simmons noted: “It pisses me off (media portrayals) because that isn’t all of us, and it maintains this deep hate, resentment and fear.”

Listen, how we supposed to survive in a system
That glorify the young getting sprung on that drug through addiction?
If life is a race then it’s clear that we not winning
Coming from a broken home is the cause of fractured children
A system that lock away the young for conviction
What you expect him to do if he don’t have a pot to piss in?
Barely living getting by so he selling weight
Just to get it cause his momma can’t provide
So he gotta do for his siblings

The “action asks” likewise challenge media outlets to start off 2018 with more of the positive narratives that youth experience — but rarely see — represented in the media. For media that commit to the “action asks” Kevon Wright noted: “I hope people watching the media (afterwards) will see that that’s how a lot of us actually are and actually see ourselves—we already see positive black youth, communities and neighborhoods, but now others can see more of it.”

As for the media response to the “action asks,” Frank Howard observed: “A lot of people were very positive” and sympathetic to the message. Media representatives also shared some of the reporting constraints they face, like how positive news can get cut to make way for “breaking news stories,” and feeling that the positive news isn’t as well received or desired by consumers. One raised the issue of the lack of black reporters in Milwaukee media organizations and the influence that can also have on the narratives shown. Terrance appreciated the discussion and acknowledged: “I think they were more helpful than we anticipated. They challenged us, but they also helped us figure out the next steps in how to advance with our ‘action asks.’”

Ultimately, four of 12 invited media outlets committed to at least one action ask: Channel 12 WISN, Milwaukee Journal Sentinel, WUWM and Milwaukee Neighborhood News Service, with bonus support from the Milwaukee PBS series Black Nouveau. During the month of January, the YAC will track and recap articles that meet the “action asks” every Friday on the Rebels Facebook page. Look out for the recaps and for a follow-up article on our results in early February!