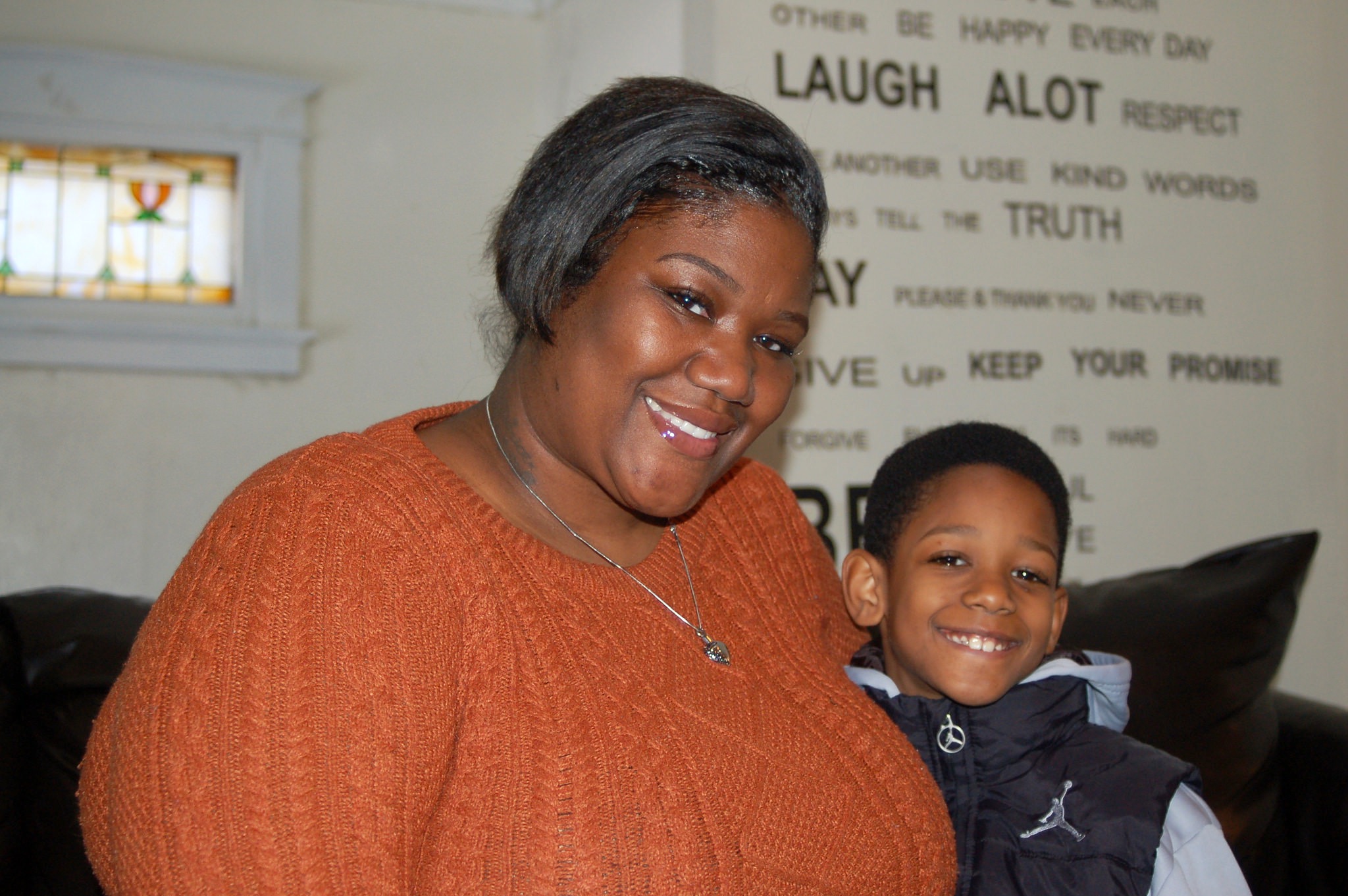 Hazel Blackmon and her son Mekhi, 7, pose at their home on North 23rd Street. (Photo by Andrea Waxman)

Hazel Blackmon had completed the prerequisites for an associate degree in nursing and had started working on the clinical portion of the program when her education was derailed. A single mother raising six children, Blackmon, 35, struggled with the fallout from identity theft, which included losing her financial aid. Then her mother got sick.

“I wasn’t able to focus in the way that I should have to complete that semester of clinicals … and it pretty much burned me down,” she said.

Now, two years later, Blackmon is getting a second chance. Next week, Milwaukee Area Technical College (MATC), where she was previously enrolled, is launching Commit to Complete, an initiative to help students such as Blackmon return to school and earn their degrees.

Like the MATC Promise, for students coming to the college directly from high school, the new program increases access to higher education, said Johnny Craig, MATC’s vice president of student services. As soon as they launched the MATC Promise, college leaders began thinking about how they could use the concept to serve adults in the community as well, said Tony Tagliavia, MATC’s director of marketing and communications.

“It is a ‘last dollar’ scholarship grant opportunity that helps students that have some unmet need so they don’t have to have that out-of-pocket expense,” Craig added. 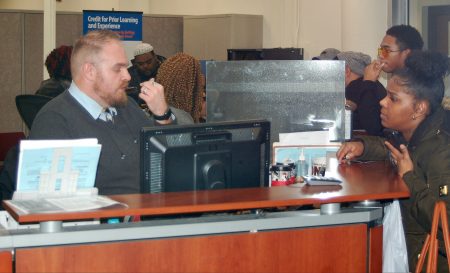 MATC students take care of business before the start of the spring semester that begins Jan. 16. (Photo by Andrea Waxman)

To participate in Commit to Complete, students must live or work in the 53206 ZIP code, have earned 24 college credits, have not attended college in two years and meet several other criteria. Students also must be enrolled in specific programs “tied to high-wage, in-demand careers.”

The initiative will cover tuition and fees for accepted students. Though the cost of books is not included, “we’re always looking to help and see what we can do,” said Tagliavia.

Local philanthropist and Milwaukee County Executive Chris Abele, made a personal gift of $500,000 to support the launch of the program, according to Tagliavia.

Blackmon learned of the program through fliers sent home and posted at Next Door, where her youngest son attends preschool, and from a cousin who is an MATC graduate. She supports her four children, ages 5 to 13, and two teen cousins working full time as an insurance adjuster and supplements her income with hair design and cake baking. Being so busy, Blackmon said she did not immediately see that this program could open the door to her dream of becoming a nurse. But after hearing about Commit to Complete several times, she realized that “the universe was trying to tell (her) something” and she visited MATC.

Blackmon is excited to be going back to school. Not only will nursing increase her income, she said, “It will fill a void in my life. I’ve always taken care of people. That’s just who I am. I’m very hands-on and nursing is the field that I always wanted to be in.”

Zsa Zsa Brown, 52, also feels a calling to help people and she too will begin the clinical part of the nursing program through Commit to Complete.

Brown worked as a caregiver for the elderly and wanted to be in a position to offer more care. She enrolled in MATC’s nursing program five years ago. After three years and 40 credits of course work, Brown was forced to drop out because she wasn’t able to quit her day job to put in clinical hours. In addition to supporting herself, she helps support eight grandchildren, she said.

Now working full time as a customer service specialist for a dental insurance company, Brown will be able to schedule her work hours in the early morning and evening so that she can do her clinical hours during the day. The long hours “will be well worth it in the end,” Brown said.

She expects to complete her associate degree in four semesters and plans to pursue a bachelor’s degree after that.

Abele’s donation is allowing MATC to pilot the program in 53206, “the community it wants to focus on initially,” said Craig, “but we will look to expand in the future.”

For the spring term, the college received 115 applications for Commit to Complete, according to Tagliavia. MATC is still processing applications and speaking with students and will not have enrollment figures until the end of the month, he said.

Tagliavia noted that the college will work with students to complete their degrees through other grants and financial aid if they don’t meet all of the Commit to Complete criteria.

“No one is being turned away,” added Craig. “We want to bring (students) back … to complete their degrees and impact not only their lives but the lives of their families and their chances in the community.”

For more information on Commit to Complete call 414-297-6118 or go to complete@matc.edu