You are here: Home / Home / Carousel / NNS distributes free copies of ‘The Long March to Freedom’ on MLK Day
Share this... 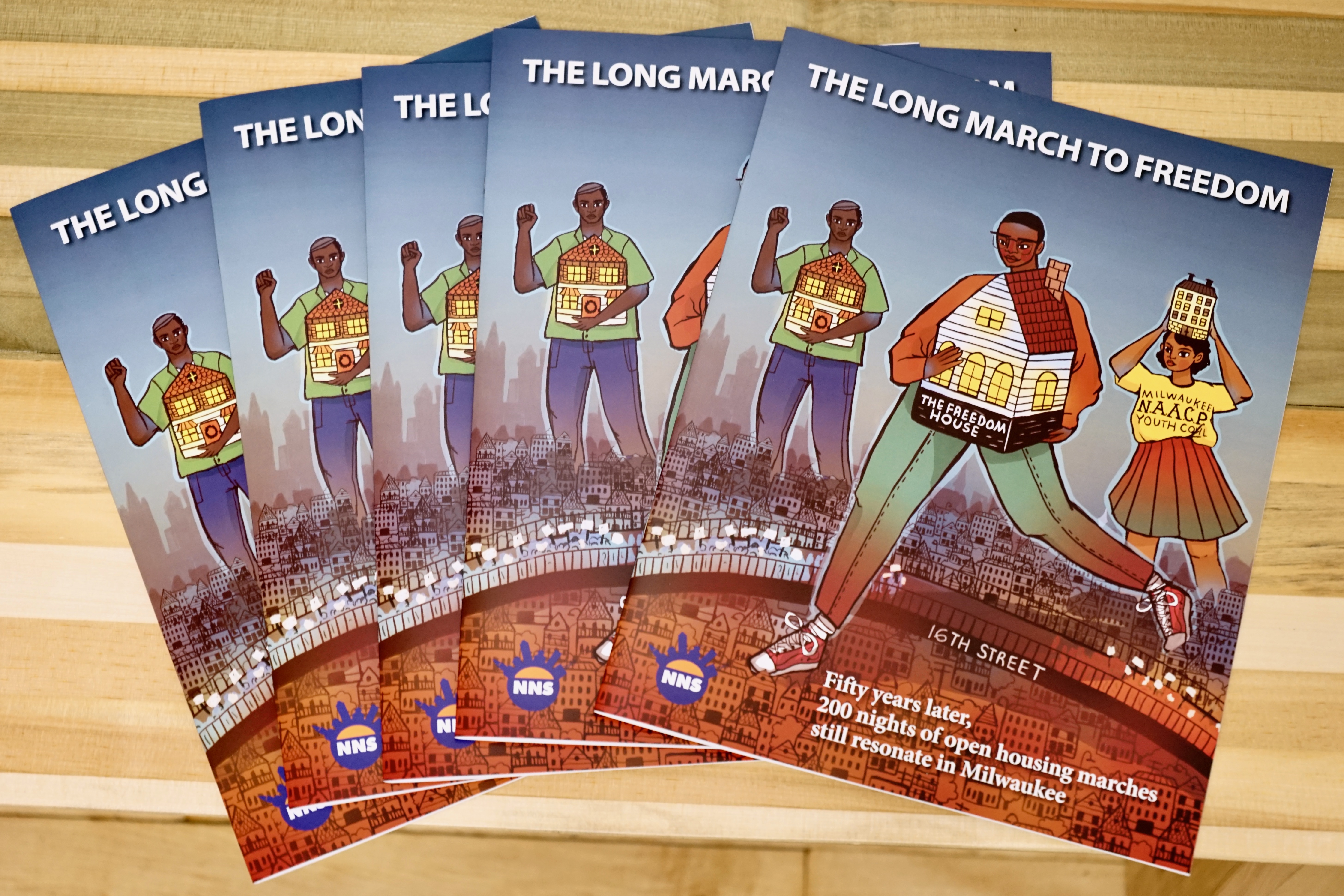 For 200 consecutive days, beginning on Aug. 28, 1967, members of the NAACP Youth Council, under the guidance of Father James Groppi, demonstrated for the passage of open housing laws in Milwaukee. Fifty years later, Milwaukee Neighborhood News Service produced a 15-part series in which it looked back at the marches through the eyes of participants, and addressed residential segregation and black leadership today.

The book, illustrated by local artist Gabriela Riveros, will be available to the public at the Martin Luther King branch of the Milwaukee Public Library, 310 W Locust St., from 9 a.m. to 1 p.m., or as long as supplies last.

Copies also will be distributed at other King Day celebrations, including the YMCA’s 21st Annual Dr. Martin Luther King, Jr. Celebration Breakfast, which is sold out. The book was available at the Marcus Center celebration on Sunday.

In their introduction, Dr. Robert Smith and Dr. Dan Bergen wrote, “Fifty years ago, members of the Milwaukee community marched in pursuit of justice. This collection captures the steady beat of footsteps as a rhythm for the pursuit. It is a beat that resounded throughout our city during the civil rights movement, and continues to reverberate today.” Smith is director of the Marquette University Center for Urban Research, Teaching & Outreach and Bergen is executive director of the Marquette University Office of Community Engagement.

In addition, journalism students at Marquette University’s Diederich College of Communication contributed to the book. Videos and text stories were produced by a digital journalism class taught by LaToya Dennis; text stories and graphics also were provided by Julie Grace and Dean Bibens, students in Herbert Lowe’s journalism capstone class.

“The reporters engage activists from the era, and contemporary voices, to honor the 50th anniversary of the marches, and to contextualize a history that remains so critical to understanding the doggedness of the racial disparities we face as a city today,” wrote Smith and Bergen.

Printing of the book was made by possible by Marquette University’s Center for Urban Research, Teaching & Outreach and the Office of Community Engagement. Community organizations interested in receiving bulk copies should contact NNS at info@milwaukeenns.org.