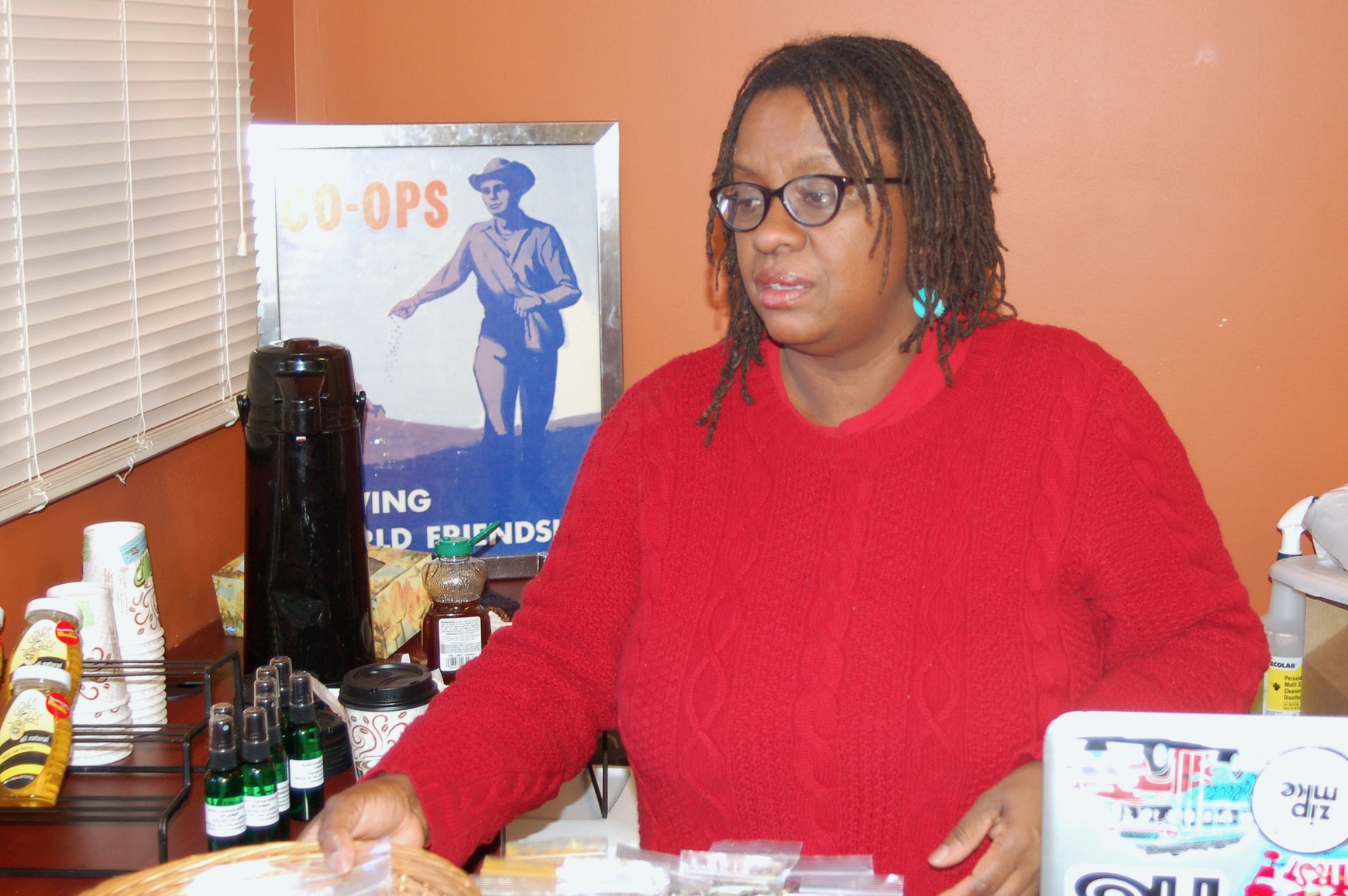 Venice Williams sells her skin care and other herbal products at the Outpost Makers Market on North Avenue most Saturdays. (Photo by Andrea Waxman)

Although the recent closing of the Body & Soul Healing Arts Center in Sherman Park may have seemed abrupt to some, Venice Williams and her congregation, The Table, had been contemplating the center’s future for more than a year. The Table, is the ministry that runs Alice’s Garden.

“It’s a decision that we could have made this time last year,” Williams said, “but I was really feeling the pain” of the many organizations and individuals using space there who would be displaced.

After the dozen or so Table members involved in planning learned that the building’s owner, Good Shepherd Trinity Church, intended to sell the property at 3617 N. 48th St, “we began to look at who it is we are and (who we) want to continue to be in the city,” Williams said. “That brought us full circle back to the Kujichagulia Lutheran Center.”

In 2006, Williams was forced to move out of Kujichagulia, 3908 W. Capitol Drive, where she led the Seedfolks Youth Ministry for seven years. A roof leak that pre-dated her arrival had finally rendered the building uninhabitable and there were no funds for repairs. During her years there, Kujichagulia evolved into an even more vibrant community center than Body & Soul, Williams said.

Now, after more than a decade at the Body & Soul Healing Arts Center, Williams and her congregants have decided to repair, renovate and re-open Kujichagulia, which it already owns, rather than buy another building. Kujichagulia is Swahili for self-determination.

“It has become a priority for us to get this building re-opened and to bring under one roof all of the amazing programs and projects that we are doing in a space that belongs to us and to put our resources into that property,” Williams said. 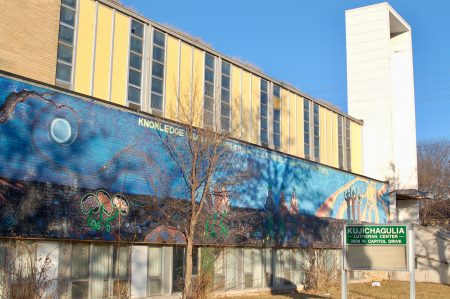 Kujichagulia Lutheran Center, adorned with a mural by Ammar Nsoroma called “Knowledge is Like a Garden,” has stood vacant and in need of rehabilitation for more than a decade. (Photo by Andrea Waxman)

Kujichagulia is half again as large as Body & Soul. It is also more centrally located and accessible by bus, Williams said. And, she noted, “it makes even more sense … because of all of the incredible work and energy that Alice’s Garden and The Table and our partners have been engaged in for the past decade.”

One important way Williams has nurtured the community at Alice’s Garden and Body & Soul is by teaching agriculture, modeling and supporting entrepreneurship, and helping youth and adults build employment and entrepreneurial skills and experience.

“I wake up almost every week, if not every other day, (to news of) very dismal statistics … about the city of Milwaukee and specifically about how so much gainful employment and meaningful work has disappeared in the African-American community.” At the same time, the Kujichagulia Lutheran Center “sits here crying out to be used,” she said.

Although replacing the roof and rehabilitating the inside of the building will likely take 18 months to two years, “the community here on Capitol Drive is so excited just with the thought of Kujichagulia re-opening. So are many other folks throughout the city, who came there for poetry nights and for rites of passage classes and for community meals and workshops and events,” Williams added.

Small business owner Courtney Kelly grew up in the neighborhood and she and her mother are excited at the prospect of the center’s re-opening. Kelly first went there to attend a friend’s open mic poetry set more than 10 years ago, she said.

Then Williams offered Kelly meeting space for her book club. Kelly also remembers a time when her family hosted a “friends and family” fish fry at the center, where they were able to prepare food, play games and have a live band “for little to no cost,” she said.

She was attracted to discussions such as Williams’ Martin Luther King Day programs and she volunteered at the center’s free community breakfast, food pantry and clothing bank. As the owner of Rochelle Consulting and Events, an event planning business, Kelly said she knows that community members are always looking for places to gather and host baby showers and other small events.

The Table’s vision for the revitalized center includes establishing a home for the Alice’s Garden farmers training projects. Other plans include a farmers market; café, retail makers cooperative; and production of an herbal product line.

It will also be a gathering space for The Table and other entities but “what sets it apart from other traditional congregational ministries is how important it is for us to grow sustainable employment through sustainable agriculture and what it means for us to house local makers,” Williams said.

In addition to providing space for Alice’s Garden’s year-round office, Body & Soul was home to the Milwaukee Food Council and the Wisconsin Doulas of Color Collective and provided space for many smaller organizations and individuals starting businesses. But although “everything (at Body & Soul) continued to be vibrant … until the moment we moved out,” according to Williams, the closing is sad for many who felt at home there.

Though its closing poses a challenge to the work she wants to do with mothers in the African-American community, she said that she and her colleagues will have to be creative and patient in finding solutions. In the meantime, Hernandez-De Windt said, she will teach classes in her home.

“We are really grateful for the time we did have there and all of the things that we were able to do. It’s honestly amazing all the different programs that I was able to be part of in that one building,” Hernandez-De Windt said.

Iris Acevedo, who operated a sewing business, Virtuous by Design, at Body & Soul also is grateful for the opportunity Williams gave her to cut costs while a full-time fashion design student at Mount Mary University. Since graduating in December, Acevedo, has decided to relocate her business to a home that she is looking to buy so that she will be available to her children.

“Venice has always been …  somebody who, if I needed resources of any kind, she’s always been so generous with me — with the space — but also allowing me to be autonomous. As a business it’s great to be affiliated with great people but autonomy is important too.”

Acevedo said the timing of the closing is good for her as she is refocusing her business. “I want to start my own sewing pattern company and (continue) teaching classes,” she said.

The Milwaukee Food Council, which is growing and had already begun moving some of its functions out of Body & Soul, is working on finding a new location, said Board President Stephanie Calloway.

Calling the closing “bittersweet” Calloway said, “It’s still a huge shift. “Venice herself has been involved in the Milwaukee Food Council since its inception and she was on the steering committee for a long time and we definitely felt like the Body & Soul Healing Arts Center was our home.”

Williams noted that “absence and gaps and longing are good things for (helping) people to understand that something needs to happen.” And for The Table, it’s important “to model that ‘church’ is not a building,” she said.

Williams added, “The promise that the re-opening of Kujichagulia means for the city of Milwaukee and specifically the African-American community is immeasurable at this point.”