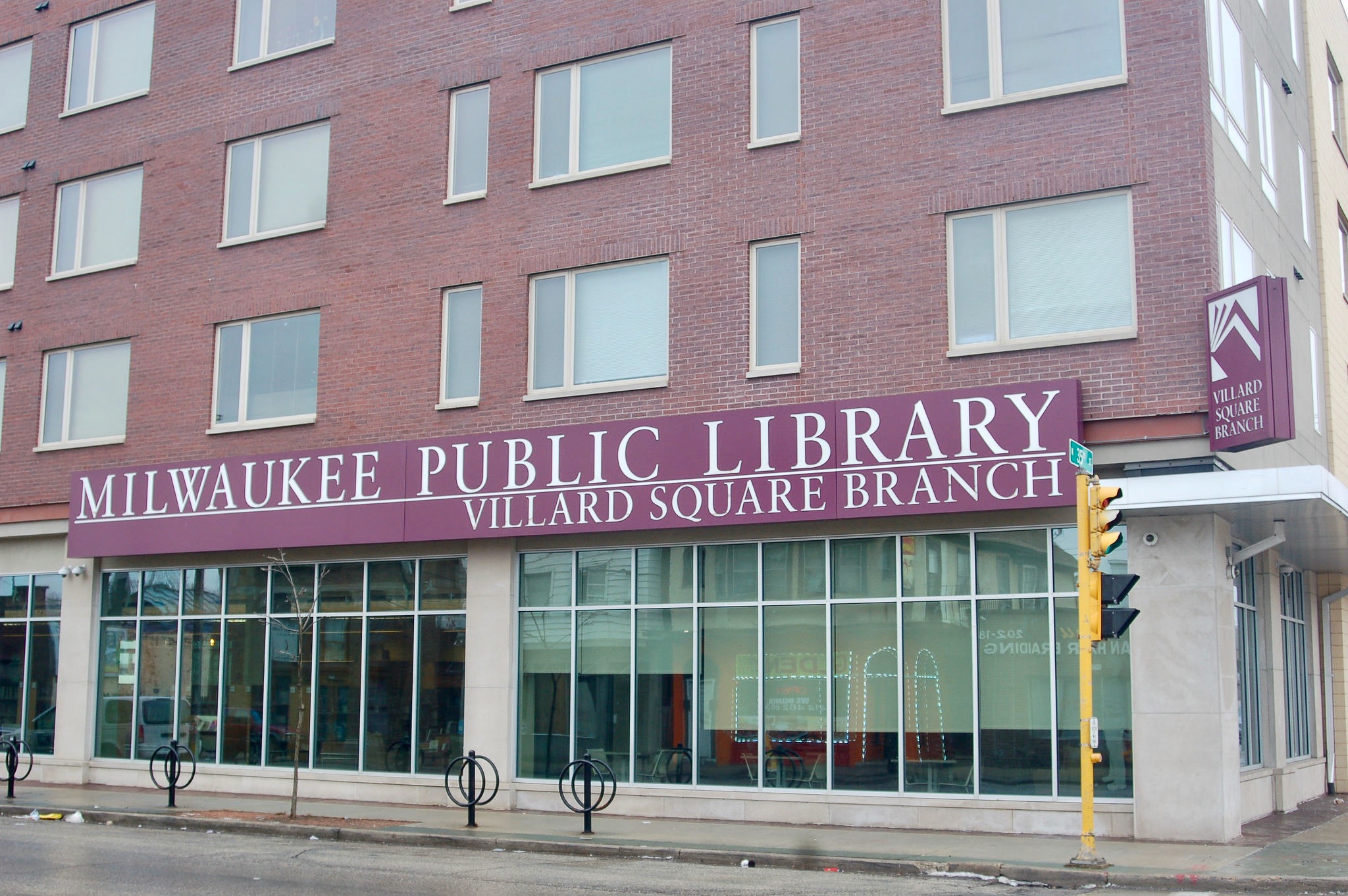 The Villard Square branch of the Milwaukee Public Library sits beneath 47 apartment units, some of which are affordable housing. The Northwest Side Community Development Corporation helped fund the building’s construction. (Photo by Elliot Hughes)

Editor’s note: This article is one of an occasional series profiling the 12 finalists for the Milwaukee Awards for Neighborhood Development Innovation (MANDIs). The Northwest Side Community Development Corporation is a finalist for the Chase Economic Development Award for its work revitalizing the area. The award recognizes economic and business development.

The Northwest Side Community Development Corporation is doing many different things in many places on Milwaukee’s northwest side, but one project encapsulates how the organization approaches its work.

Back in 2003, the public library on Villard Avenue was targeted for closing, since the building had fallen into disrepair. Nearby residents protested and NWSCDC not only joined in, but it tried to find a solution. It gained control of some nearby land and after some negotiating, struck a deal with the city and other business partners.

The result was a new building that, today, houses the library on the ground floor and, above that, 47 apartment units, with some designated as affordable housing specifically for adults who are raising their grandchildren. The $11 million project included a $1.2 million investment from NWSCDC. It created 150 construction jobs and retained not only the communal benefits of a local library but the jobs it provides.

In that one project, NWSCDC flexed many of its muscles at once. It engaged in community activism. It invested funds into a development project that filled a gap in services in the community. It created jobs and retained others.

“They involve the community, the neighbors — they understand what their area is about,” said David Latona, the president of the Milwaukee Economic Development Corp., which frequently partners with NWSCDC. “Businesses around there are going to perk up, because they know someone cares.” 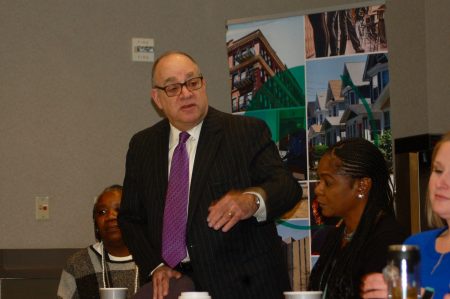 Howard Snyder, executive director of the Northwest Side Community Development Corporation, speaks during a presentation on Jan. 10. (Photo by Elliot Hughes)

NWSCDC’s mission is to battle poverty and unemployment by making quality jobs available to low-income individuals. It goes about that mission by acting as an “alternative lender,” making business loans that a bank perhaps is not willing to make. But it also is active in the community — organizing peace walks, bike rides and assisting groups and individuals with myriad problems.

“We’re not as well known for that as we want to be,” said Howard Snyder, the executive director. “But the noise that we’ve been making in the last year, we’re going to be better known than we have been. We’re working very hard on really important issues in this community.”

NWSCDC began in 1983 as a community development corporation that focused mainly on acquiring and managing commercial properties and installing services and business that would benefit the northwest side, which the organization defines as between the northern city limits and Interstate 94; and between Interstate 43 and the western city limits.

Snyder said NWSCDC “wasn’t very good” at the property management game. After some financial difficulty in the early 1990s, it reinvented itself as a lender and community organizer.

Since 2000, when its lending program began, NWSCDC has lent just over $10 million to 14 businesses and created 1,002 jobs. Of those, 860 were full time and went to low-income individuals, according to the organization.

Many of those loans are made possible by grants received through the U.S. Department of Health and Human Service’s Office of Community Services. Those who receive those loans have to create full-time jobs with consistent hours and benefits for low-income individuals.

More than half of the jobs created have gone to residents of the northwest side and the average starting pay is between $12 and $15 per hour, according to Andrew Haug, NWSCDC’s resource development manager.

And those loans are designed not just to benefit businesses and the people they hire; they also are designed to benefit the community at large. NWS’s investments have retained the local library branch, allowed retail space to grow and brought grocery stores to food deserts.

“A lot of funds that were lent, were lent in areas where we know there was a definite need,” said Willie Smith, the organization’s director of lending.

Meanwhile, NWSCDC has stepped up its presence in the community. Its staff members have organized rallies for safe driving, sat in on block watch meetings, leveraged funding to help improve storm water management, helped various community groups organize themselves and led an effort to save the Schulz Aquatic Center in Lincoln Park from closing.

“I don’t know where we’d be without them, frankly,” said David Thomas, a member of the Friends of Lincoln Park. “It’s really been successful in getting the attention of the news media and the county executive’s office and I don’t think we would have done that successfully without them.”

NWSCDC staff members said an engaged community attracts businesses. If a pool were to close and a nearby park would not be as populated or vibrant, or if nobody tried to address the area’s reckless driving problem and drivers felt unsafe, “that’s bad for business,” Snyder said.

Added Smith, “All of this is what it takes to improve the area. It hasn’t been just about economic development; it’s been about all of the facets of a community — economic, social and residential.”