You are here: Home / Posts from Community / Ex Fabula storytellers describe what it means to “Break Free”
Share this... 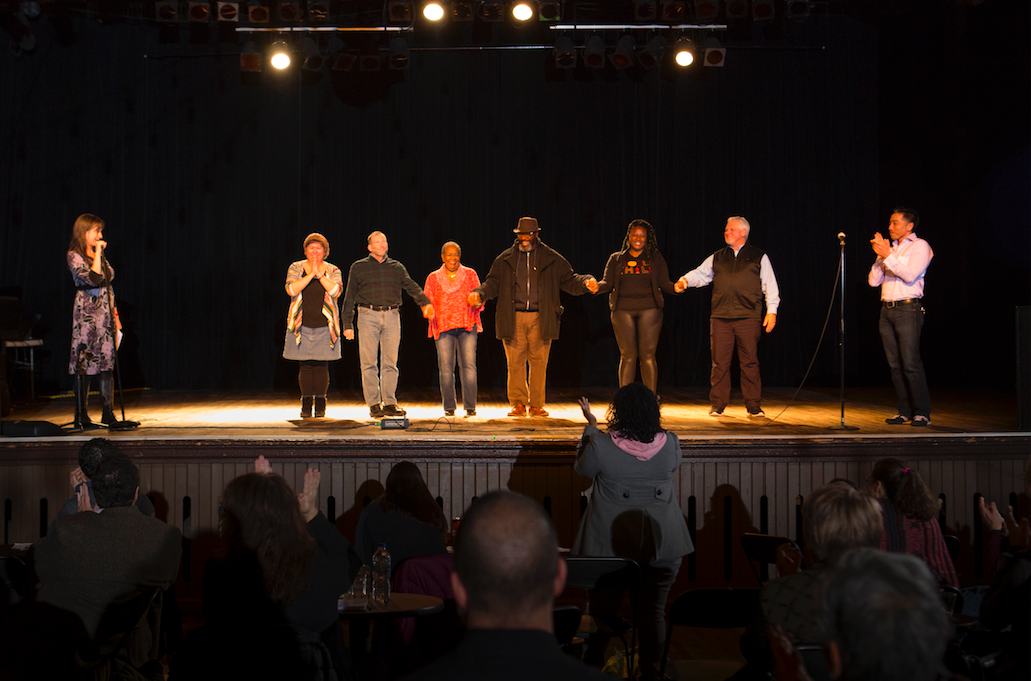 What does it mean to “break free”? Six tellers at the New Year Spectacular at Turner Hall ballroom had widely different takes on that theme.

Bradley Gassel – the first teller of the evening– shared a tale of his road trips in the seventies, as he shuttled between Milwaukee and his adopted home in Venice Beach, California. His driver’s license was safe in his wallet (which happened to be in Milwaukee) when he, his friends and an erratic taillight attracted a police officer’s attention. This was in rural Nebraska, where his “California dude”, hippie looks didn’t go over so well. It looked like his party would be detained, but they were able to “break free” after a series of unusual events.

Then T. Gillom shared a searing story about her struggle to break free of a tradition of family violence – both verbal and physical – that harmed her grandmother, her mother, and her, in turn. As T read her late grandmother’s journal, she relived the way her grandmother had torn down her mother, calling her ugly, and despising her darker skin tone.

She explained how her need to protect her mother, who never stood up for herself, made her ready to enter a relationship with a man whose own toughness and violent tendencies seemed like a refuge at first. T had a son with him, and they moved away from home so she could go to college. She weathered storms as her partner became abusive. She finally “broke free” in an act of violence that assured that her son, whom she proudly describes as a “pacifist”, could grow up to leave that legacy behind.

Shawn Mitchell described how working in corporate environments for years to support his family caused him to put dreams of running his own business on hold. Though being an entrepreneur can be risky, after he experienced insecurity and poisonous atmospheres through more than one corporate downsizing, he broke free of the idea that he had no choice, and started his own business. He assured the audience that his business can be a roller coaster, but he has no regrets.

Dan Lococo is an avid skier. Since he’s visually impaired, he skis with a guide. Skiing that way, he’s enjoyed not just the slopes, but the harmony that comes from trusting another person, both to guide him and share the experience. But one day, he skied with a less-experienced guide and ended up on the chairlift by himself, without the assurance of his regular guide talking him through the dismount. There were plenty of reasons to panic, but as the staff mobilized to help him, he broke free of fear and managed get off the lift safely.

Jeanette Mitchell grew up in the segregated St. Louis of the 50’s and 60’s. One day, her school’s Black students were left at school when the rest of the class went on a field trip to a segregated amusement park. The abusive words of the angry nun who had to stay behind with them made her resolve to “live white” to escape the stigma.

She followed through ­– hanging out with white girls, learning to play bridge and to polka. When her family moved to Milwaukee, they found the slights and discrimination less overt than in St. Louis, but no less wearing. She went to work for the phone company, and saw clearly that race was a factor in hiring and promotion. Angry as she faced the double standards; bolstered by her classes at Alverno College and the swelling of Black pride in 70’s culture, she made a decision to live her life proud to be a Black woman and a leader.

How can cleaning out a closet, and pausing at a shelf stacked with old blue jeans lead to a decision to break free? Monica Thomas moved back to her childhood home after a tough divorce. She told us that she definitely tends to accumulate stuff. Lots of it… But she has a support group with other folks trying to de-clutter, and was working on a plan to pack and remove one bag of stuff per day for forty days during Lent.

She was working on her project one day and got ready to fold up jeans that were a size she knew she’d never fit into again. Suddenly, she was overcome by a feeling of long-suppressed grief. When those jeans did fit her, she was 50 pounds lighter due to weight loss from the stress of divorce and financial disaster. As she cried, she reflected on the fact that during that low point in her life, she often received compliments about her appearance. Monica decided then that she’d break free of the feeling that she must be thin to be truly worthwhile. Her New Years and every day resolution is to love herself as she is.