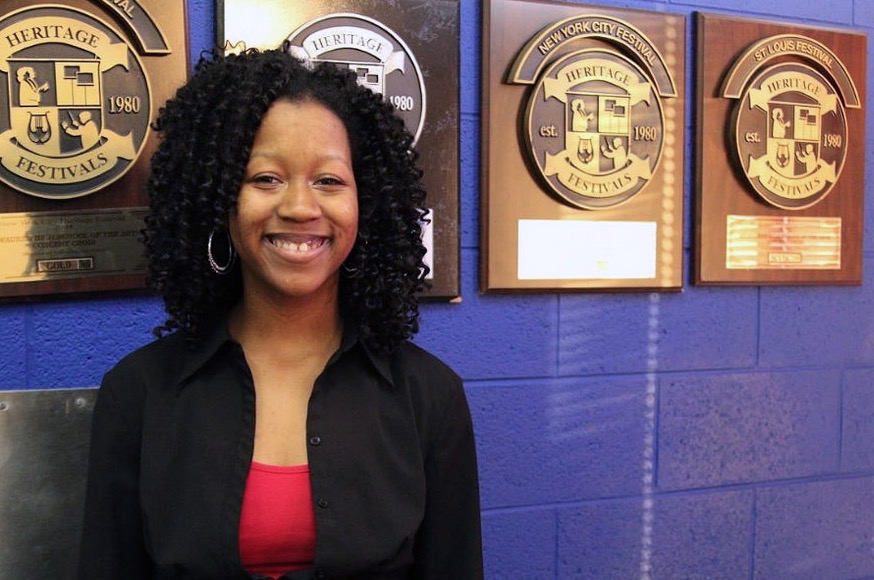 Princess Vaulx, 17, of Milwaukee High School of the Arts, was in pre-calculus class Nov. 29 when she opened an email on her phone sent to her just 30 minutes earlier. She could not believe what she was reading. “I was shocked. For a second I was just staring, swiping the email up and down, over and over again.”

The email alerted her that she won a Merit Award from the National YoungArts Foundation for her jazz singing. The senior was one of more than 8,000 students who competed in the 2018 YoungArts competition and one of just 700 to receive recognition.

She said she was trying to stay calm, but found it difficult to contain her excitement in the quiet class that day. Right after class, she went to her vocal jazz teacher, Raymond Roberts, who had inspired her to compete.

“He really wanted to get us into the competition because he really shows us the potential that we have,” she said.

Roberts said he expects a lot from his students, but knows they will rise to those expectations and learn something about what they can achieve. “The teen mind is kind of a nebulous thing that hasn’t totally formed yet and (having students being recognized) reinforces my philosophy of really driving kids to work hard so that they can discover their potential,” Roberts said.

To enter the competition, Vaulx recorded and submitted four songs from different styles of jazz: “Autumn in New York” by Vernon Duke, “Sunny Side of the Street” by Jimmy McHugh, “Jeannine” by Duke Pearson and “Softly, As in a Morning Sunrise” by Sigmund Romberg,

“Picking the songs is kind of a big deal, because they’ve got these categories to fit, but finding the songs that really fit their voice, that really highlight their strengths, is my biggest part,” Roberts said.

Vaulx received a YoungArts medal in the mail. “I wasn’t expecting it at all. … I was like, ‘what is this? I didn’t order anything online, why is this here for me?’”

She didn’t start singing jazz until she auditioned for a vocal jazz class two years ago. That’s when she tried to learn more about and appreciate jazz, and began focusing mainly on jazz music, she said.

The high soprano entered the competition last year, but was not selected. “I knew that I had grown in my art tremendously, so I just wanted to take a chance again and see if I would qualify. I knew that I definitely wouldn’t qualify if I didn’t apply,” Vaulx said.

Vaulx, who lives in Brown Deer, is planning on attending college to study kinesiology and music.

Roberts said a lot of students express interest in national competitions and the deadlines are all around the same time, the third week of October. “Students who express interest in entering those, I pretty intensely work with them one-on-one, use class time, lunch time, my prep time or … study hall,” Roberts said.

He estimated that Vaulx put in eight to 10 hours of in-class time, and practiced additional hours on top of that during the three to four weeks before the deadline for submission. 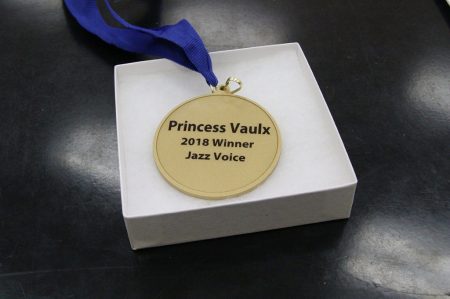 Vaulx’s medallion came to her in the mail. (Photo by Rachel Kubik)

Roberts said since 2011, the school has had six singers recognized by YoungArts. “I had an inkling that she would be recognized.” Roberts said that out of the four students who applied this year from MHSA, “I thought she had the most legitimate shot.”

“I was thrilled, and not terribly surprised, but really happy because she worked so hard for it.”

Diane De La Santos, executive director of City on a Hill, watched Vaulx grow throughout the nine years she’s been participating in the organization’s Youth Center.

“She’s quite an accomplished young singer,” De La Santos said. “What I often hear people say when they hear Princess sing, is that the song seemed to come from her heart. She’s a quiet young lady in conversation and so forth, but when she sings, she just really pours her heart out and pours her heart into her music.”

De La Santos said it was very nice to see her honored. “I was very excited for her. She has a lot of talent, she works hard on her music, she wants to use the gifts God’s given her in effective ways and to the best of her ability,” De La Santos said.

Demetrous Elam, 17, a senior at MHSA who plays alto saxophone in the jazz ensemble, has known Vaulx for about eight years. The jazz ensemble and the vocal jazz class perform together often, so Elam hears Vaulx sing “pretty much every day,” he said.

Elam said that while he was initially upset that Vaulx did not notify him immediately of her award, he was very happy that she won. “I wasn’t surprised like, ‘Oh my God, Princess, you sing so good,’ because I already knew the girl has what it takes,” he said.

Elam said it’s difficult to describe how Princess sings. “It’s like that unh, that ahh! She’s just got that juice, as Milwaukee people say.”