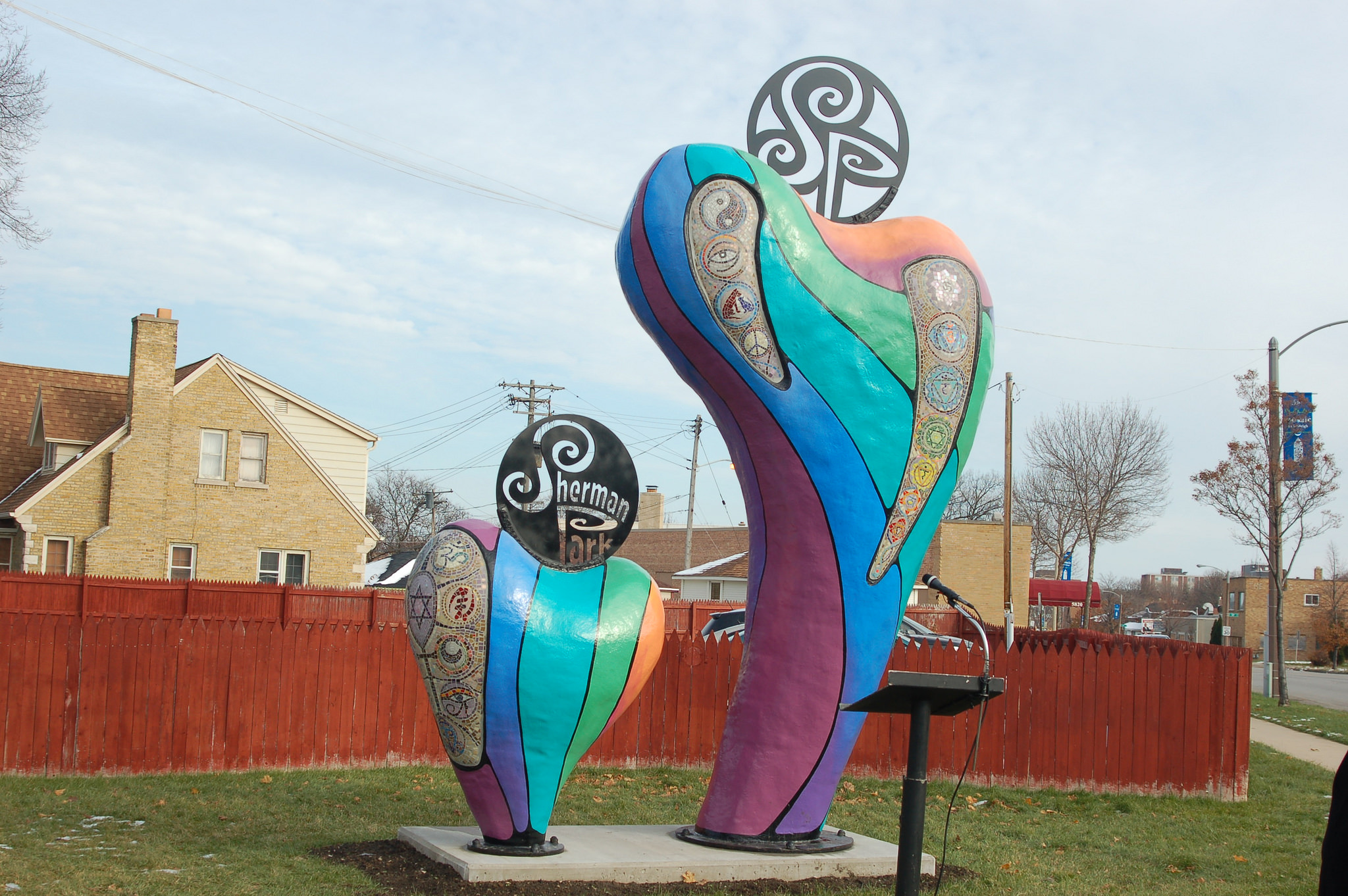 Editor’s note: This article is one of an occasional series profiling the 12 finalists for the Milwaukee Awards for Neighborhood Development Innovation (MANDIs). The Community Improvement Project (CIP) is a finalist for the BMO Harris Cornerstone Award, which recognizes commitment and effectiveness over time.

Kennedy Holliman was honored when fellow Urban Underground teens and Sherman Park residents chose her design for a community sculpture.

“I wasn’t expecting it at all. I was just putting what I was feeling on the inside, out,” said Holliman, now 19.

A high school student at the time, Holliman decided to represent the community with symbols of the neighborhood’s many ethnicities, religions and traditions.

The sculpture, called “Compassion,” was unveiled in November 2015 at the intersection where Roosevelt Avenue meets 60th and Burleigh streets to mark a neighborhood entry point. It was funded by a partnership between the city and the Greater Milwaukee Foundation’s Healthy Neighborhoods Initiative.

In 2008, the city expanded the funding of small neighborhood projects into the Community Improvement Project (CIP) and offered it to neighborhoods citywide. Administered by the Neighborhood Improvement Development Corporation, CIP offers matching grants of up to $4,000 for community projects, such as the “Compassion” sculpture, that engage residents and beautify neighborhoods. 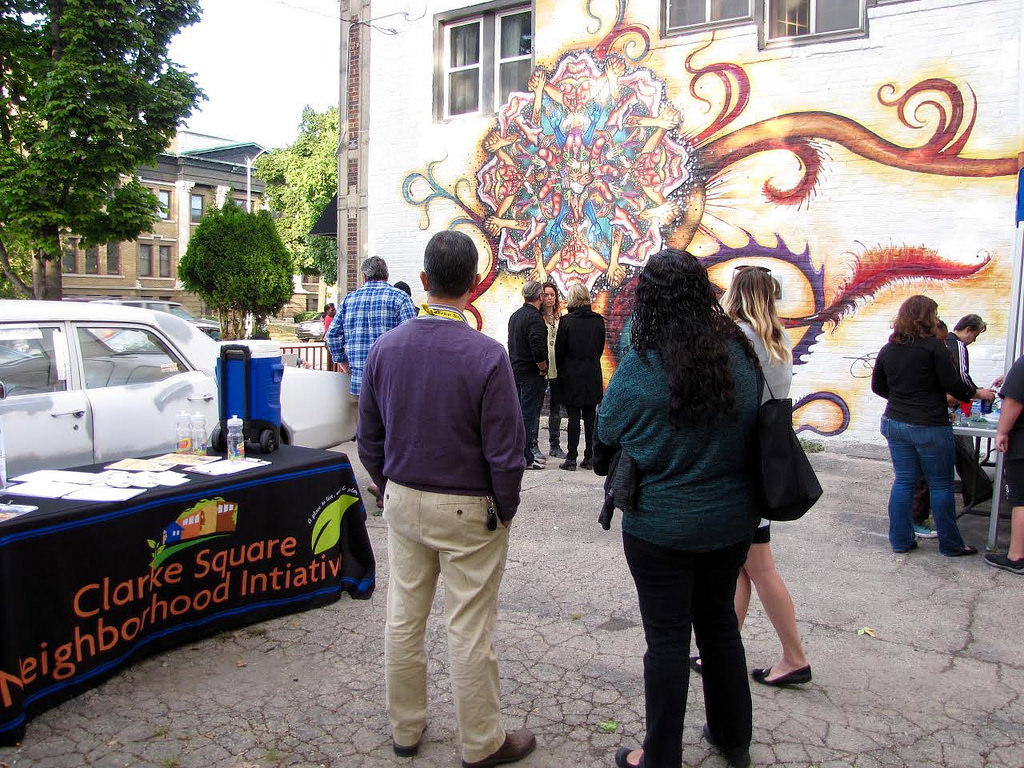 The “Handala” mural by artist Jennifer Espenscheid depicts the hands of area residents arranged in the shape of a mandala. (Photo by Jessica Luebbering)

Since 2008, upwards of $1.1 million in CIP grants have funded more than 300 projects that involved 10,000-plus participants in 50 neighborhoods. An additional $2 million was leveraged from residents, businesses and organizations in these neighborhoods. Residents and neighborhood organizations must raise half of the money needed for a project to be eligible for a matching CIP grant.

“We want the neighbors to be involved. We want to hear their voices as to what they’d like in their neighborhoods,” Mitchell Reid said. A CIP “needs to be something permanent for the community,” that will add beauty and value and enhance the quality of life, she added.

In the Clarke Square neighborhood, CIP matched $4,000 contributed by the Patee Group, a real estate development company that purchased a foreclosed building from the city. Patee then added another $4,000 for a mural to adorn the west side of the building on the southeast corner of 25th Street and National Avenue.

Company owner Ryan Pattee wanted to make a commitment to Clarke Square, which he believes is poised to flourish. “It’s got good people, good geography, good architecture. I really wanted to make a statement … and hopefully invite other people to come and invest (there) as well.”

The Clarke Square Neighborhood Initiative (CSNI) and the building owner discussed with residents what the neighborhood means to them and then requested proposals from artists for the mural. They also hosted a community gathering at which a volunteer photographed the hands of residents. Mural artist Jennifer Espenscheid arranged painted images of the hands, which represent a variety of ages, abilities and aspirations such as hope, peace and love, into a mandala shape. The mural, which was completed in July 2017, is titled “Handala.”

NIDC’s contribution was vital to the project, Pattee said, adding that it would have been difficult for his company to fund all the costs for the mural. He is grateful that the community “stepped up” and that the city supports and values art, he said.

CSNI’s Danielle Nabak said Clarke Square is still feeling the ripple effects of working together on the beautification project. “It’s going to have lasting impact on the neighborhood.”

“I was very happy with it … and my living room is so much warmer,” said Cloyd, 82, who learned about the CIP grant opportunity at a neighborhood association meeting. “I was so glad to get this help,” she said. “Even paying half of the cost was a hardship.”

Jonatan Zuniga, a community outreach manager at Layton Boulevard West Neighbors, said LBWN used CIP grants for “all types of community projects from community gardens, to a band shell at a park, to smaller improvement projects focused on one block.” Noting that all of the projects bring the community together and build resident leadership, he added, “There is not a lot of funding for smaller-scale projects” and if it weren’t for the CIP funds, many would not be possible.

Vanessa Llanas, formerly community outreach liaison at NIDC, said she misses working on projects that reach so deeply into the neighborhoods.

“Chances are any time you’ve driven through the city, you’ve seen the impact of Community Improvement Project grants.”